All the bench is paved in gold 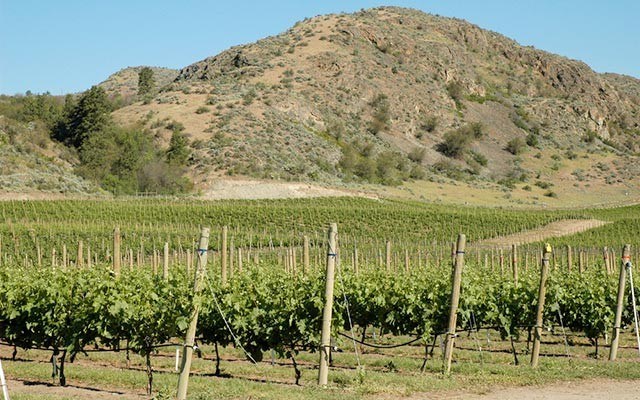 Late last month the Minister of Agriculture, Norm Letnick, finally put pen to paper and approved the Golden Mile Bench — which is located south of Oliver on an east-facing bench — as the first wine sub-region to gain geographical indication (GI) status in B.C.

It's a significant moment for British Columbia wine given that the B.C. wine map has stood still since the early 1990s when the original VQA program set out six very large geographical regions that could be used on our local wine labels.

The truth is the broad monikers of British Columbia, the Fraser Valley, the Okanagan Valley, the Similkameen Valley, Vancouver Island and the Gulf Islands have long been outdated.

The wine industry has grown exponentially over the last decade but the B.C. wine map has been on constant hold.

Historically, the world's finest wine regions have been sub-divided over time to place a spotlight on the single best plots of vineyard land in the region. Consumers can expect to see the designation "Golden Mile Bench" printed on several labels in the coming months as wineries making wine with grapes grown inside the newly minted boundaries release their latest bottles.

Sub-appellations can be complicated but it's all in how you look at it. When you are buying wine labelled Okanagan Valley what that really means is the grapes in the bottle could be grown anywhere from Osoyoos to Vernon. That's 175 kilometres of distance or not unlike driving from West Vancouver to Hope. On a summer's day the temperature in Hope versus West Vancouver, or Osoyoos versus Vernon, can be substantially higher. Not to mention soil differences, wind, rain and so much more, hence the need for more specificity on wine labels.

The Okanagan or Vancouver Island, for that matter, is a lot of land, or terroir as winegrowers like to say, to blanket with a single appellation, which is why more meaningful sub-appellations are required to speak directly to the many smaller, unique spaces across our province. By differentiating sites, growers can concentrate on growing better grapes that express the land they are grown upon. Our only hope to capture the world's attention is to produce unique wines and by definition that requires farming very specific appellations.

In the case of the Golden Mile Bench GI there were three main factors that determined its boundaries.

The first is slope: fluvial fans with an easterly-facing slope of between 5 to 15 per cent create their own mesoclimate catching the warm morning sun and avoiding the baking heat of the late day. The slope also promotes vital air drainage to prevent frosts and dry the vines after rainstorms.

Second, the Golden Mile Bench dirt or soil is mostly uniform, boasting a coarse texture without any water table influence in the rooting zone. It's derived entirely from geological formations of Mount Kobau.

Finally, elevation or aspect plays a role, with minimum elevations defined by the base of Hester and Tinhorn Creek escarpments while the maximum height sits at the apex of the Reid Creek fan.

"Wine is as much about place as it is anything else", says Bill Eggert, owner of Fairview Cellars. "Having a legal definition of where our wine comes from is a huge step forward for us and the entire industry."

Last week, I caught up with the folks at Road 13, Tinhorn Creek, Culmina, Hester Creek and Fairview Cellars along the Golden Mile Bench. Each has been working relentlessly to find their karma on the bench and with birth of the GI they each seem inspired to explore all the possibilities these magic slopes have to offer.

After a dozen years, owners Mick and Pam Luckhurst are stepping back from the business end of Road 13 as son, Joe, steps up to run the property.

Together with Road 13 winemaker J.M. Bouchard they have chosen to concentrate on several Rhone grape varieties launching terrific bottles of Marsanne, Roussanne, Syrah and Viognier and any number of combinations mixing the grapes to make both red and white blends. It's a significant step to have a style and grape focus and by looking to the Rhone for inspiration, Road 13 is on the fast track to elevating its wines to a new level.

At Tinhorn Creek, CEO Sandra Oldfield, a crucial cog in getting the Golden Mile Bench certified, has turned over the winemaking duties to newcomer Andrew Windsor, who has been busy tweaking the Tinhorn style over the last year.

Windsor has a degree from University of Adelaide and lots of experience, including stints at the highly respected Mollydooker in McLaren Vale and perhaps the single best cooperative in France, Cave de Tain, which is located at the base of the hill of Hermitage in the northern Rhone Valley. Windsor's first wines are about to be released and we can't wait.

At nearby Culmina, co-proprietor Don Triggs and winemaker Pascal Madevon are making magic on three distinct benches, some of which are on the Golden Mile Bench and some just outside of it. The Culmina Unicus is an amazing wine, a one-of-a-kind grüner veltliner that is what the New Okanagan is all about. A visit to Culmina is one of the best experiences in the valley. Don't miss the pinnacle red blend Hypothesis.

Moving north, winemaker Rob Summers and hospitality director Roger Gillespie rule over the Hester Creek renaissance. The 2014 Old Vines Trebbiano Block 16 (one of the oldest plantings on the Golden Mile) is as unique and tasty as ever but all the wines are improved, led by a very solid 2014 Pinot Blanc. Concerts, cooking classes, The Villa (accommodations) and Terrafina Restaurant make Hester Creek another anchor stop along Highway 97 south.

Finally, no Golden Mile visit is complete without a stop at Fairview Cellars to meet iconoclast grower/winemaker and owner, Bill Eggert.

Eggert makes around 3,500 cases most years and most of that is red. Eggert's first love is the difficult-to-ripen cabernet sauvignon and over the years he seems to have come to peace with the variety finding a way to smooth its tannins, avoid the green herbaceous notes and make reds of substance.

Eggert has just started to release his 2012 reds, including the 2012 Bucket O' Blood – 100 per cent estate-grown cabernet syrah from the Golden Mile Bench — a small appellation born in 2015 in the south Okanagan.

It certainly has a nice to ring to it.