McGill researchers have created ice cream that can be stored at room temperature
Jul 16, 2014 6:00 PM By: Brandon Barrett 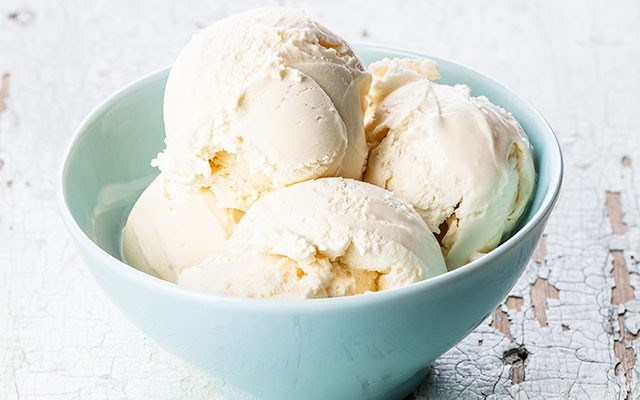 You may soon find your favourite ice cream brand on the grocery store shelf where you least expected it.

It may sound like an oxymoron, but, thanks to a team of Montreal researchers, there now exists a frozen dessert that you don't have to keep in the freezer.

Frisson is the creation of a 16-student team from McGill University's Food Science program, a unique sorbet-like dessert that can be stored at room temperature in its original liquid form. Once the mood strikes you, all you have to do is remove and replace the container lid to let a little air in, give it a quick shake, and put it in the freezer. A few hours later and you'll be enjoying a sweet treat like you would any other scoop of ice cream.

It means no sticky, drippy mess when you're pulling out that half-melted tub of ice cream, and less competition for coveted freezer space. Since Frisson doesn't require any refrigeration equipment, the innovation could also have far-reaching impacts for major ice cream companies who already spend a significant amount of money and energy on storing and transporting their frozen products.

The invention made such waves in food science circles that it was even selected as one of 16 finalists in the revered Institute of Food Technologist Students' Association's annual Food Product Development Competition — the first time in over 25 years that a Canadian team has made the finals. Frisson ended up placing third in the event, which draws more than 20,000 food professionals from across the world.

So how does it all work?

Frisson stays stable until the package's seal is broken, after which nitrous oxide stored in the container is activated, generating tiny bubbles in the mixture that, once frozen, create the smooth, creamy texture of ice cream we all know and love. It also contains several natural sugars — including arrowroot starch, agave syrup and corn syrup — that, working in conjunction, are essential to the freezing and melting process.

And while it sounds heavy on the chemical content, the scientists behind Frisson assure that, as far as ice cream goes, it's actually quite healthy.

"We meet a lot of requirements of people who are on restricted diets," said recent McGill graduate Karine Paradis in an article appearing in the McGill Reporter.

"Frisson is pasteurized, vegan, dairy-free, gluten-free and it has zero cholesterol. It also has a high-fibre content, which is very unusual for frozen desserts."

Frisson currently comes in two varieties — almond pistachio and hibiscus ginger — although the research team had to slog through countless recipe tweaks to come to the final iteration, and had nearly 500 people sample their product in the developmental period.

"Honestly, some were just awful — the taste, the colour, the texture," Paradis told the Reporter. "But we are really happy with the end result. We were looking for something that is refreshing; and a flavor that people are not used to but is not too challenging for consumers. We think we got it."