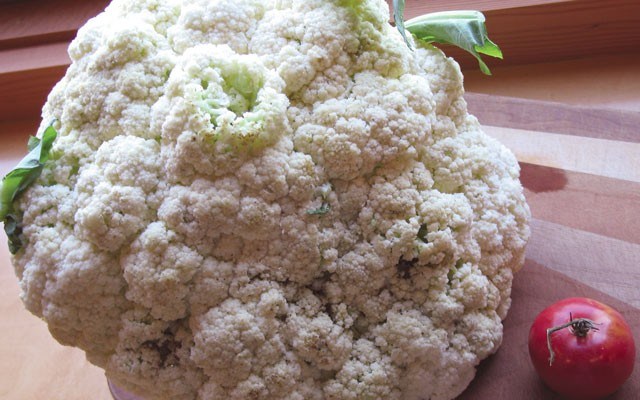 GIANT AMONGST GIANTS: This Taiwanese cauliflower weighed in at nearly three kilos and delivered a sweet, mild flavour. Photo by Glenda Bartosh

Once upon a time long, long ago, there was a big, white head of a vegetable called cauliflower that was grown in just about every post-War Canadian garden.

As soldiers and sailors and the rest headed home from the European and Pacific fronts, looking forward to family life rather than bombing raids or torpedo runs, the idea of a little bungalow with a big yard for starting the good life was the "it" thing in the late '40s and early '50s.

Cauliflower was one of the best plants for breaking ground in those big yards with plenty of space and fertile Canadian soil worked through with tons of compost from the stinky, backyard compost pile nearly every family had. It was also a favourite vegetable amongst the many people displaced by the War — Italians and Ukrainians; Poles and Romanians alike.

In those days cauliflower was much like zucchini today, when midnight dumpers with zucchini coming out their ears leave bundles of the babies on neighbours' doorsteps, often with recipes or notes begging the unwitting inhabitants within to take pity on the poor orphans and eat them up.

In earlier times, it was cauliflower you couldn't give away, at least not in our neighbourhood, because everyone had plenty of their own to wade through. Besides, five would get you ten kids would just push it around on their plates until parents gave in and let them leave the table, "no dessert" and all. (What did Bruce Stewart at Nesters Market say about cauliflower last week? It tastes like old socks...)

I remember wandering through the old farmers' market when it was in the long, spartan sheds on 101st Ave. and 98th Street in Edmonton and seeing heads and heads of cauliflower piled up, looking like so many sickly blue-white skulls in the sickly fluorescent light. Earnest old farmers and their wives in simple clothes eyed you expectantly from behind the counter. But it was the last thing we wanted to buy.

So from plain "ugh" food to celebrity status (never mind the price indexing to oil): how did cauliflower do it?

For one, there's been a big push by celebrity chefs in North America to re-think common, often unpopular veggies we've all had our issues with over the years, and elevate them to a new status. By far these resurrected veggies are cole crops, members of the mustard family (Brassica): Kale, cabbage, cauliflower, Brussels sprouts are finding a new day in the sun and on the menu.

By contrast, many of these common, overlooked veggies and more — leeks and lima beans, for instance — found uninterrupted favour in other cuisines for ages.

In his 1958 classic, The Food of France, inveterate researcher and food writer, Waverly Root, noted the cauliflower (choufleur) of Arpajon, Niort, and Lower Brittany. In her 1942 classic, How to Cook a Wolf, which was all about inspiring people how to cook inspiringly during wartime shortages, M.F.K. Fisher, takes a cue from "Patience", a W.S. Gilbert song (of Gilbert and Sullivan fame): "If he's in love with a vegetable love which would certainly not suit me..."

Fisher explains there are many ways to love a vegetable. The most sensible way is to love it well treated. "Then you can eat it with the comfortable knowledge that you will be a better man for it, in your spirit and your body too, and will never have to worry about your own love being vegetable," she writes.

This after advising us to undercook everything vegetable which, in all things cauliflower, is most advised. She goes on to suggest pouring hot buttered crumbs over cauliflower, something my mother-in-law often did.

Elizabeth David in her 1950 classic, A Book of Mediterranean Food — which introduced England to the delights of Mediterranean cuisine when barely a soul in the U.K. knew the difference between a courgette (zucchini) and a croquette — has a lovely recipe for Cavolfiore ai Strascinati. ("Cavolfiore" is Italian for "cauliflower" and "strascinati" literally means "pulled", as in pulled pork.) In fact, cauliflower is from the Mediterranean region.

Then there are the cuisines of Asia where cauliflower has been a versatile mainstay for ages. Gobi masala, Punjabi aloo gobi, and gobi Manchurian from India ("gobi" means "cauliflower") counterpoint my own encounter with a Taiwanese cauliflower — a giant of a head with tender flowerets with long green stems, and a sweet, mild taste belying its hearty size. Yes, it cost nearly $9, but then it weighed nearly three kilos.

But we can't leave the mighty cauliflower, choufleur, cavolfiore, gobi without acknowledging how healthy it is. A good source of fibre, protein, calcium, and vitamins C and B-6, it's a super veggie to get to know, even if it is an underdeveloped flower.

With a nod to everything old that's new again, here's Ms. David's recipe for this re-discovered favourite. I know they can drive some people nuts but, personally, I love recipes like this, which aren't as circumscribed as most recipes today. They allow you your own flair and interpretation.

Half cook a cauliflower in salted water. Drain it and discard the thick part of the stalk and leaves, and divide the flowerets. Have ready a pan with warm olive oil in which you have put a clove of garlic, chopped, and put in the cauliflower. Mash it with a fork and turn it over and over until it is browned on all sides.

Glenda Bartosh is an award-winning journalist who loves cauliflower all ways.