Get in the spirit of spring at The Green Moustache

An organic juice and live food bar that delights the health nuts among us
Apr 16, 2014 11:00 PM By: Brandon Barrett 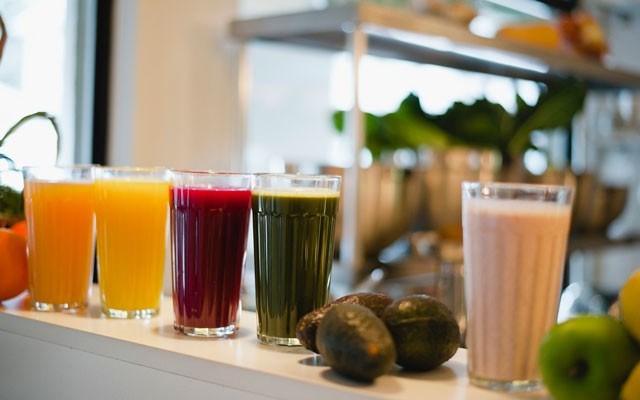 SMOOTHIE OPERATOR: A selection of homemade organic juices and smoothies from The Green Moustache in the village. Photo Submitted.

Spring is the season of renaissance. It's a time for vitality, for resurgence, for freshness, and if you could encapsulate that seasonal spirit in a culinary establishment, you might find yourself at The Green Moustache, a Whistler organic juice, smoothie and live food bar.

Opened in late December by the husband-and-wife team of Pierre and Nicolette Richer, The Green Moustache is committed to serving healthy, fresh and nutritional fare that nourishes the body without sacrificing flavour.

The vision for the organic vegetarian and vegan-friendly eatery, which shares a space with 3 Signing Birds in Marketplace, grew out of Nicolette's career as a health counsellor working primarily with patients suffering from cancer and other chronic diseases.

"The No. 1 subject of the therapy is based on consuming only organic products, so you can't have any toxins, pesticides or herbicides in your food," explained Richer, who said there are over 110 chronic diseases — including some forms of cancer — that can be helped or healed by diet alone.

"The other part of the therapy has people consuming 13 juices a day, and there wasn't a juice bar in town, so the two go hand in hand; to have a juice bar and an organic live food bar together," she said.

Richer also wanted a place in town for her friends and family — including her three salad-obsessed daughters — to come and enjoy the foods they love eating at home. But judging from the droves of local health nuts and visiting vegans from out of town, the Richers flesh and blood aren't the only ones after a healthier alternative to the typical Whistler restaurant.

"It's been amazing. We have four-hour lineups at our door sometimes, which is overwhelming but fantastic," she said. "What I love is when we get so many guests who have been coming to Whistler for years, whether they're from Seattle or Vancouver, and they're just so thrilled to have a place to eat because they come from these communities that already have health food establishments like ours."

And despite its name, The Green Moustache offers more than just creamy almond milk smoothies and cold-pressed juices packed with anti-oxidants and revitalizing superfoods. There's the housemade vegan soup of the day. The Superfood Salad made from seasonal greens, fresh veggies, nuts, seeds and sprouts. There's the Gracious Grain Oatmeal, topped with nutrifying nuts, raisins seeds and homemade applesauce. There are the bountiful Buddha Bowls filled to the brim with rice, quinoa, avocado, fresh veggies, and more nuts, seeds and sprouts. And that's before I've even mentioned the restaurant's list of raw vegan desserts, which includes a no-cheese cheesecake that has customers begging Richer for the recipe on a regular basis.

In an active, health-conscious community like Whistler's, Richer said it just made sense to set up a place like The Green Moustache.

"As I understand there was a juice bar or something similar to our salad bar in Whistler about 10 years ago and people were telling us that we had to be careful because it tried and failed," she said. "But it's hard to believe that it could fail in this day and age when people are so mindful of what they eat."