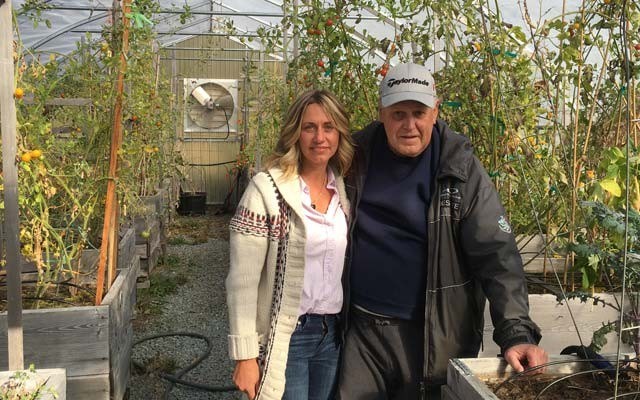 TWO LOCAL FIRSTS First-time grower and greenhouse ambassador, Kirsten Reddaway, and first-rate builder of greenhouses and community gardening, Jim Cook. Whistler has much to be thankful for with people like this in the community. Photo by Clare Ogilvie

Thanksgiving is as much about being thankful as it is about growing — growing good food that nurtures the body and growing relationships that nurture the soul.

We've heard the narrative for eons that "The First Thanksgiving" was celebrated in Plymouth, Mass. in the early 1600s by grateful colonists — pilgrims and puritans who'd safely made the Atlantic crossing of more than two months and managed to survive their first harsh year — along with indigenous people who helped them figure out what they could grow and eat. But the first Thanksgiving in North America was much more likely a Canadian affair, marked in 1578 by explorer Martin Frobisher, for whom Frobisher Bay is named.

The real roots of Thanksgiving go back even further to the days of the Protestant Reformation and Henry VIII. But each successive generation has a way of reclaiming and reforming such traditional markers. Whistler, with its culture of collaboration and sharing, is no exception.

In time for Thanksgiving — and for weeks beforehand — loads of fresh greens and tomatoes, beets and peas, carrots and more have been harvested from Whistler's 160 or so community garden and greenhouse beds by all kinds of people who've been growing good friends and neighbours along with their food.

These happy green thumbs include youngsters and teachers from Spring Creek and Whistler Waldorf schools who've been tending their own garden plots while learning about seeds and more; seasoned gardeners like Jim Cook and Lori Pyne helping newbies get a good start; and gardeners of all stripes pitching in to tend the designated plots whose bounty goes to the Whistler Food Bank.

They've all been digging the GROW Whistler garden program, which started as a wee sprout when Stephen Milstein grew giant Brussels sprouts and tomatoes in a small greenhouse next to his Alpine Meadows home. It blossomed into the original three greenhouses Jim helped build back in 2003 and this year, with another greenhouse and the outdoor community gardens at Cheakamus, transitioned from the umbrella of Whistler Community Services to AWARE (Association of Whistler Area Residents for the Environment).

"It's a fantastic fit for us... We definitely recognize that this is about growing food, cultivating health, and building community," says Claire Ruddy. She's the hard-working executive director of AWARE, which oversaw August's potluck dinner in the gardens (everything was made from garden produce) and other community events as they were "learning how things work and getting our hands dirty, as it were."

One of AWARE's green talks was devoted to growing food in Whistler, which got people registering for garden plots who've never done so before.

Kirsten Reddaway, manager at Basalt Wine and Salumeria, is one of the first-time growers this season, plus she acts as her greenhouse's ambassador to make sure everything is taken care of. Another first-time grower, her friend Beckie Skene, joined forces with her at their plot near Myrtle Philip Elementary School.

What they grew in a 20-sqaure-foot bed is amazing! It also makes your mouth water. Red beets, radishes, leafy green kale, rainbow Swiss chard, calendula flowers for massage oil and natural health remedies, red cherry tomatoes and yellow medium-sized ones, loads of cucumbers, wax beans, green beans, basil and dill, mixed leafy lettuce that produced for weeks and mustard lettuce like her mom grew at home, and arugula to top things off. Hardy plants, like kale, will even make it through winter without the greenhouse covers.

They also grew a long-standing favourite of Kirsten's that barely made it out of the greenhouse — peas.

"They're just like nature's candy, all wrapped in their little pods and then you open them up and pop them back — they're so sweet, they're delicious," she says.

"Then the cherry tomatoes are just mind-blowingly good. The difference between the store-bought ones and your own homegrown organic tomatoes is just incredible."

Everyone who grows with GROW has many people to thank, and Jim Cook is near the top of the list. Besides helping build the greenhouses, one of which bears his name in well-deserved tribute, Jim keeps the garden plots "bear aware" and provides all the seeds you need — all organic and all sourced from a grower in Sooke on Vancouver Island.

He also starts your tomato plants early so they're ready to go when it comes planting time in early May. This year alone, he started nearly 400 tomato seedlings, all of them cherry tomatoes, which mature early and people seem to prefer, or medium-sized yellow tomatoes, which also do well in the greenhouses.

As for AWARE and the job they're doing, Jim is very thankful for that.

"They are so pro-active and enthusiastic, it makes me feel good," he says. "They've got such a good solid volunteer background and such a good attitude.

"And you should see what they're doing with Spruce Grove — stuff I dreamed about years ago. Dressing up the front area by the Valley Trail with the pollinator garden, bringing in soil and gravel and planting new things. And they're working with the municipality, which is good."

Claire is also planting potatoes using old tires — something you can do at home. Just pile up the tires and throw on another along with more soil as the plant keeps growing, producing ever more potatoes as it goes upwards.

Then again, it's probably easier and more fun to sign up for a garden plot next year. Apply in March on AWARE's web site then stand by for your own unique Thanksgiving harvest, 2017.

Glenda Bartosh is an award-winning journalist who grew up on backyard garden produce, Alberta-style.