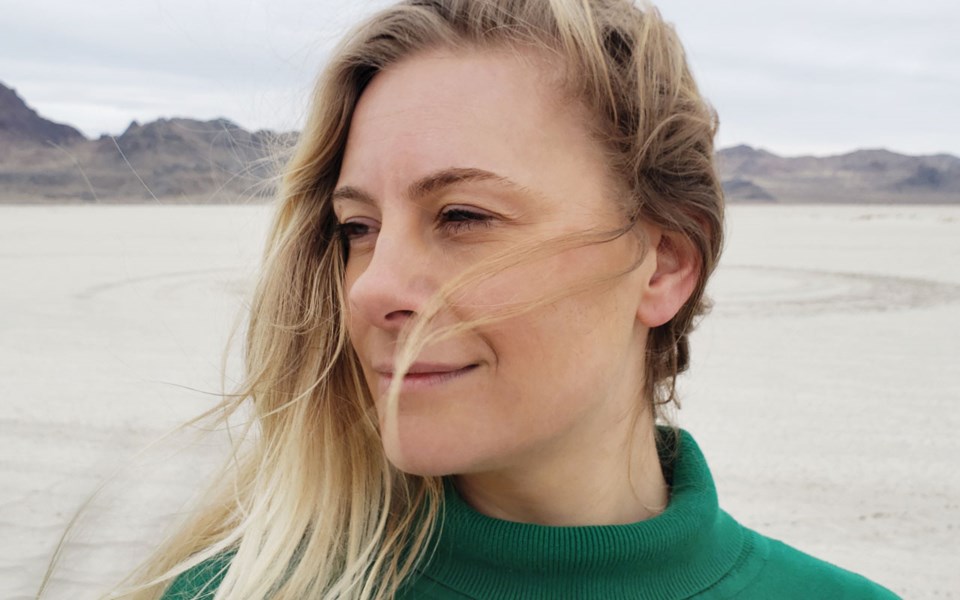 Leo Wood is amassing an impressive and unique video diary of her travels.

Originally from the U.K., the singer has travelled around the world shooting videos showcasing her deep, smooth vocals and stunning locales along the way.

When she and her boyfriend secured a two-year Canadian work visa and, last October, decided to settle in Squamish, she discovered a natural pairing of outdoor adventure and music.

“When we first did it, it was more, ‘I have two iPhones on you and it’s a little video,” Wood says. “Now, we have drones, so it becomes a little more fun. I’m [also] editing now, so I have an idea of what I want these videos to turn into too.”

The most recent release—“Siren” by Willem & McLeod, a drum and bass track featuring her soaring vocals—was shot on Whyte Islet near Horseshoe Bay.

Attracting nearly 1,000 views in less than a week, it features Wood perched on a rock in front of her microphone while a drone swoops around the tiny island.

“The feedback has been awesome,” Wood says. “Once you got the drone in there, it starts to become more eye-catching. You really see B.C. in all its glory. I’ve been all over the world and this Sea to Sky zone is one of the nicest places I’ve been.”

Wood became interested in music at an early age when someone gave her a small piano to play around with. Her dad was also a musician and would take her busking on the streets near their home in Exeter, U.K.

“I would go busking with him for the cute factor from a young age,” she recalls. “I was taught by an opera singer and from age 12, I was writing songs. I was always determined this was going to be my path, but getting your foot in the door is difficult.”

While she has a classically trained background, she also has an affinity for jazz singing. In recent years, she’s managed to fuse acoustic sounds with electronic genres.

“I’ve never been genre-specific,” she says. “I like a lot of different kinds of music. I don’t want to hold myself back by any of that.”

While musicians abound in the large U.K. music scene she comes from in Bristol and Devon, it was also competitive. The next natural move was to head to London, something she had no interest in.

“I just wanted to see what was going on elsewhere, and, at the same time, do my music,” she says. “I wanted to fight against the norm. I wanted to go travelling and do everything.”

That was how she found herself, in the midst of her travels that spanned from California to Costa Rica, shooting her videos.

When she and her partner decided to give Canada a try, they visited Banff and then Vancouver. But when they came up the Sea to Sky Highway around October last year, they were immediately struck by Squamish and decided to stay.

So far, Wood has shot a video up on a lookout at Murrin Lake Provincial Park, and she also plans to add a Whistler location to her roster.

“On the Murrin Park one, there were quite a few people knocking around going, ‘What is this girl doing?’ I’m wearing headphones and, in my head, I can hear the whole beat. They just see me singing into the wild on my own,” she says with a laugh. “Every single one we’ve done, there have been people around.”

While she plans to travel around B.C. this summer, she hopes that there might be an opportunity to perform in front of a local, live audience at some point.

“I’m going to travel around B.C. and when I see somewhere cool, we’ll film a video there,” she says. “Maybe by the end of summer, if enough people have shown interest of some kind, an outdoor gig would be wicked.”