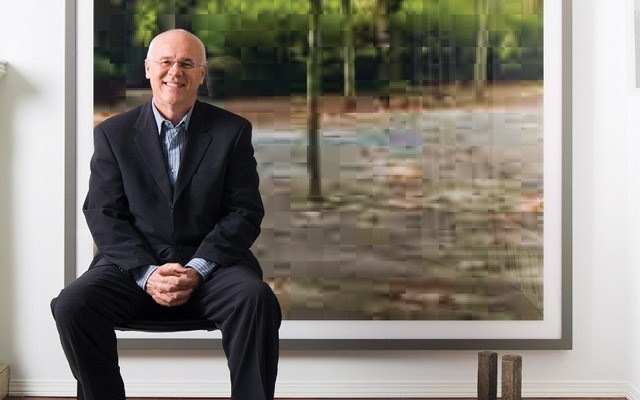 Laing Brown is an art collector who is interested in stories, in ideas.

Brown, chair of the Audain Art Museum acquisitions committee and an external advisor to the acquisitions committee of the National Gallery of Canada, has just returned from Britain, where he went to check out Frieze London, where 160 of the world's top commercial galleries show off works by artists they represent.

"Our real passion is collecting art," he says.

"We'll sometimes meet people in London, or New York, often in Miami and we'll go there when the art fairs are on. The Tate (Gallery, in London) put on a great show. You can meet 30 or 40 dealers at one time instead of having to travel around."

Brown built his own collection of abstract art over the course of his career as a Vancouver lawyer; it became a second career as he was brought in as a consultant and he left law two years ago to concentrate on his passion for art. He was also on the board of the Vancouver Art Gallery in his late 30s.

Conceptual art is a particular love.

"It is the visual arts, so it has to be visually interesting, even beautiful. You can add impactful and powerful to that. But if the idea isn't there in the piece, then I am a lot less interested. That's just me, personally," Brown says.

"The 10th rule is just get started. Look at as much art as possible. I'm going to spend time on this because people say this but they don't really show what this means," he says.

"I try to give people six different ways to look at art. I'm hoping to make it fun for people. It's a serious talk but I want it to be accessible."

Brown does not speak often about his work, and has been researching extensively for the Audain talk. He plans to stay away from his own collection but will refer to his personal experience in order to explain his relationship with abstract art.

"At first I didn't get it. I didn't like it. I didn't know a good one from a bad one, so I questioned it instead. But the more I looked at it... it actually feels that the drawing, or the house, or the dog... it gets in the way now," Brown says.

"I like to let people know that while they might not immediately relate to abstract art, they should give it a chance."

Brown described the process of moving from collecting art at a Canadian level to international level as "daunting."

"It's a lot easier going to dealers on south Granville Street (in Vancouver) and go to five galleries and get a bit of a concept. It's a leap for most people," he says.