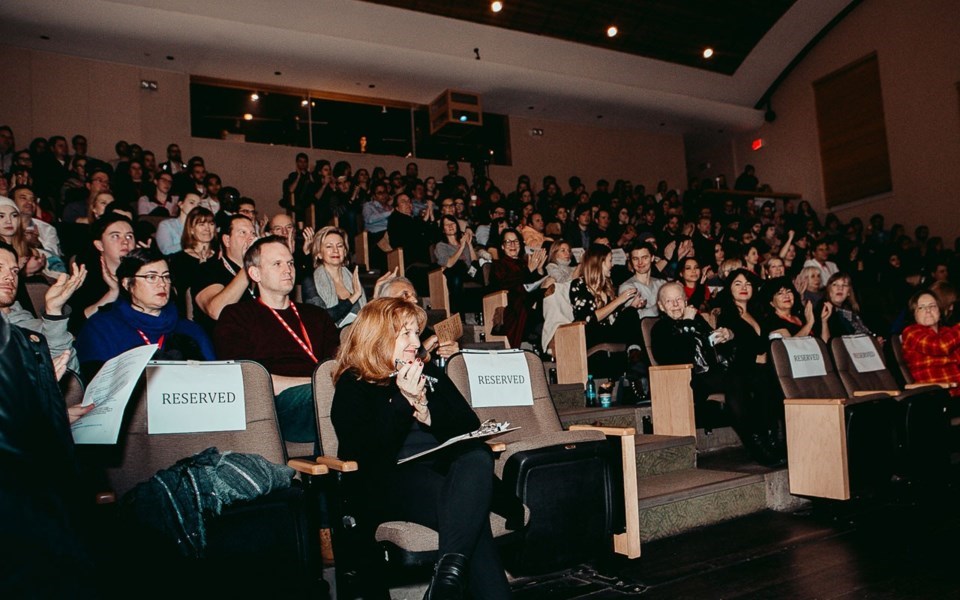 The Whistler Film Festival will look much different than years past in 2020, with the event moving to a 20-day virtual format—with the potential for a five-day physical event welcoming regional attendees. FILE PHOTO BY ERIC BECKSTEAD / COURTESY OF WFF

The Whistler Film Festival (WFF) will celebrate its 20th-anniversary edition with 20 days of online programming this December—and the potential for a physical event attended by regional guests, depending on how the COVID-19 situation pans out in B.C.

“At this point in time, it’s all moving online and it’s a decision that we had to make,” explained festival founder and executive director Shauna Hardy Mishaw. “We took a lot of time to see what was going on in the industry, best practices and took some time to assess how other festivals had done by taking their programming virtually. We were able to come up with a plan we felt would work.”

From Dec. 1 to 20, the festival will screen film premieres, filmmaker and talent talks, and industry programming online. The lineup will include up to 30 new feature films and five short-film programs, compared to 86 films, with 43 features and 43 shorts in 2019.

Festival organizers are also exploring ways to combine virtual programming with an adapted five-day physical edition of the event, from Dec. 2 to 6, that could potentially include the premiere of its full slate of films to a regional audience. All physical premieres would be physically distanced screenings, contingent on the province’s reopening health guidelines.

Holding a physical event is crucial to festival organizers, as it would allow them to screen films from studios they otherwise wouldn’t.

“If you have been following along with what’s going on in with film festivals around the world, a lot of studios will not let film festivals that are only delivering virtual programs have their product, since they want to release them digitally themselves,” she explained. “By having a physical festival, it will potentially allow us to have films that other events won’t be able to acquire.”

The WFF is still planning its annual awards celebration on Dec. 6 to hand out 15 juried awards and more than $41,500 in cash prizes and commissions. The deadline to submit films of any length and genre is Aug. 15.

While acknowledging the challenge of moving its traditionally intimate atmosphere to a digital realm, Hardy Mishaw believes future editions of WFF could take on a larger online component.

“Going forward, we think the festival will evolve to be a hybrid of both a physical and virtual festival,” she said. “That’s a prediction that we’re making at this point in time and it’s really looking at what’s going on with other festivals and having a lot of collaboration with them.”

A decision will be made in September about whether to proceed with the physical event, Hardy Mishaw noted.

Although the pandemic has ground film productions the world over to a screeching halt, interest in the WFF hasn’t waned in the film community, with the festival receiving more than double the number of submissions as last year. That will also include films from the corridor, with the festival presenting its first ever Sea to Sky Short Showcase.

“Our regional audience is very important to us and we know the Sea to Sky is renowned for its creativity,” she said. “We really wanted to celebrate artists from the region and give them a chance to be recognized in association with the festival.”

Widely regarded as one of North America’s most filmmaker-friendly festivals, Hardy Mishaw said WFF remains committed to delivering the slate of industry programming it is known for, which are slated to run for three weeks in December, but realizes moving the programs online may diminish some of its cachet.

“On the professional development side, forming relationships is an absolute key part of the event and Whistler has a reputation for being very intimate and very inclusive. That’s something we’re trying to maintain even in this virtual experience,” she said. “There are concerns around it and we’re doing our best to mitigate those but there are also opportunities. Some people we wouldn’t be able to bring can now participate because they wouldn’t be able to travel to get here.”

Like the rest of the entertainment industry, the WFF has been hit hard financially by COVID-19, with roughly 20 per cent of its revenue coming from ticket sales. Fortunately, however, an anonymous donor has pledged $150,000 to the festival, provided the public matches it. The festival has so far raised $100,000 of its goal, and has until Aug. 15 to secure the remainder.

“That is helping us enormously and we are extremely grateful to this individual, as it will help us get through this year,” Hardy Mishaw said. “It’s our 20th year and wasn’t supposed to be like this. We had a grand celebration planned but the fact that we are able to rely on this funding is going to really help our organization and ensure our programs continue to survive and thrive.”

WFF will begin announcing 2020 programming in September, with passes and tickets available for purchase. Hardy Mishaw added that, if a physical event goes ahead, filmgoers will likely be able to purchase a combined virtual-physical festival pass.