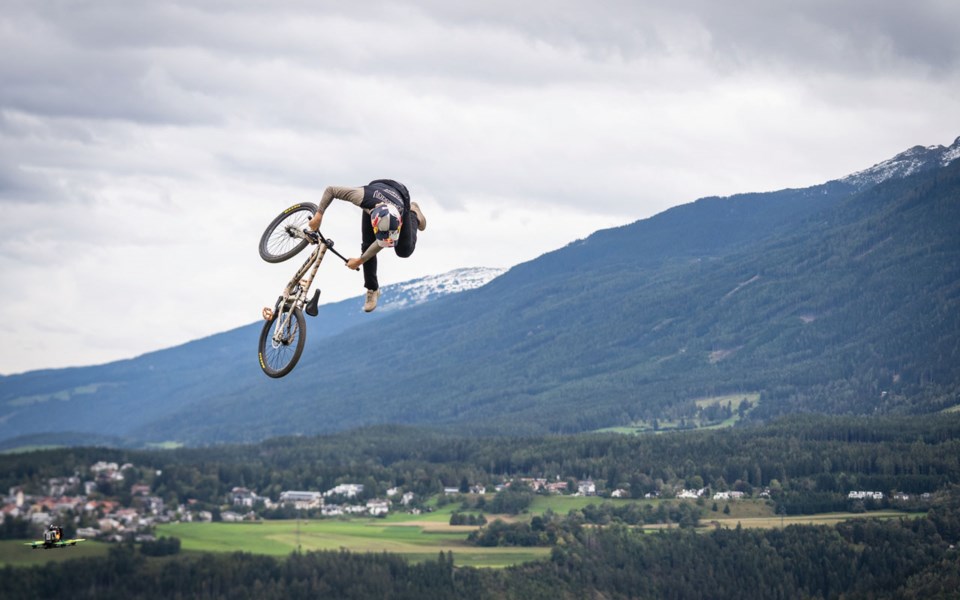 HIGH-FLYING ACTION After cancelling its Whistler festival, the Crankworx World Tour held an event in Innsbruck, Austria from Sept. 30 to Oct. 4. Photo by Kike Abelleira/Crankworx

All things considered, Darren Kinnaird was pleased with how Crankworx’s first international event during the COVID-19 pandemic went off.

The Crankworx World Tour general manager said that while there were some challenges to holding the circuit’s Innsbruck stop from Sept. 30 to Oct. 4, it was ultimately a worthwhile experience.

“The athletes were super, super grateful that we were able to do something,” he said, noting organizers took care to be “overly safe, overly cautious.”

“From Summer Series and from this, we know that we can, regardless of where we are, put on a safe event,” he added. “When you have enough planning, foresight, communication, documentation, you can run a successful, safe event in these times.”

Kinnaird and the Crankworx team had a test run of operating in a pandemic during the Crankworx Summer Series, held at three resorts across the province with a roster of B.C.-based athletes. However, there ended up being some challenges that experience couldn’t account for.

“We had no idea what early October in the Austrian Alps was going to be like,” Kinnaird chuckled, adding that the whip-off course was blanketed with 40 centimetres of snow the weekend before competition. “It was more intense weather. On Saturday (Oct. 3), we had to cancel everything.”

Kinnaird said there was heavy wind and rain, with a tree falling onto the gondola line, though it was removed.

“I’m looking forward to doing it in the spring again,” he said.

While the festival saw a strong number of entries overall, the fields were European-laden, with only a handful of athletes making the trip overseas. Only two Sea to Sky reps attended, with Pemberton’s Lucas Cruz finishing 21st, as the top Canadian, in the iXS Innsbruck Downhill on Oct. 4. The race was a warm-up for the UCI Mountain Bike World Championships in nearby Leogang, running from Oct. 7 to 11, with the downhill contest closing proceedings.

Cruz said in an Instagram post that, despite a tough downhill run, that he was “very grateful to be over here in Europe doing what I love!”

Meanwhile, Whistler’s Anita Naidu was on track to take part in the first overseas women’s CLIF Speed and Style, but the event was wiped out due to weather.

Kinnaird said it was particularly challenging for American riders to head to Europe, especially with constantly changing rules, while for many Canadian riders, the prospect of heading over for a one off was a tougher sell.

“They’re not keen to travel internationally with everything that’s going on,” he said, noting self-isolation on either side of travelling adds up. “You’re really committing to four weeks there plus two here, so it’s a month and a half.”

Looking ahead to 2021, Kinnaird said the tour is making plans and contingencies to hold all three stops in Rotorua, Innsbruck and at home in Whistler, and is prepared for as many situations as possible.

“We want to be ready for whatever gets thrown at us and whatever we are or aren’t able to do,” he said.

As for a Summer Series redux, “we’re trying to figure out how that may or may not fit in the mix,” Kinnaird said.

“It was super successful last summer and regardless of what happens with the world tour, it’s something we want to build on,” he said.

First Nations Snowboard Team makes pivot
Oct 15, 2020 9:00 AM
Comments
We welcome your feedback and encourage you to share your thoughts. We ask that you be respectful of others and their points of view, refrain from personal attacks and stay on topic. To learn about our commenting policies and how we moderate, please read our Community Guidelines.