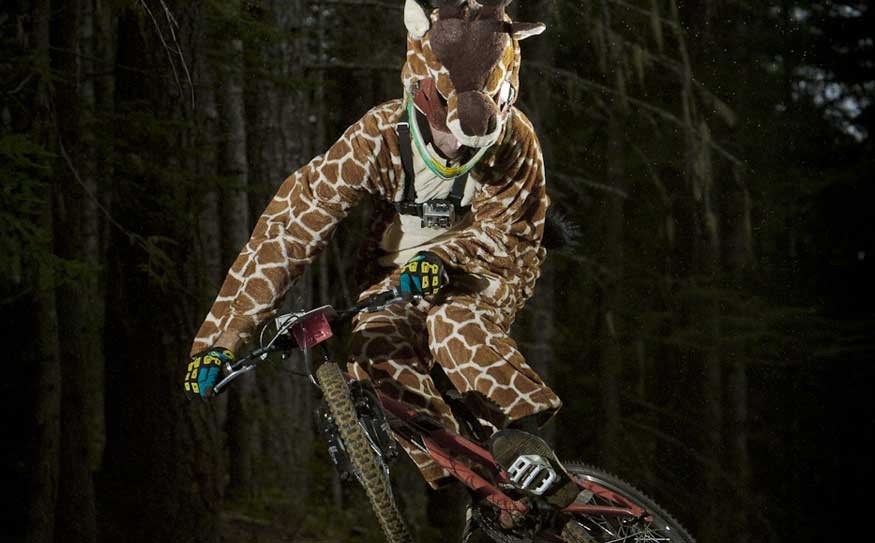 WELCOME TO THE JUNGLE Mike Gamble donned a giraffe costume and borrowed a kids' downhill bike with 20-inch wheels for the final Phat Wednesday race last week, an annual chainless rip down A-Line. photo by justa jewkova, <a href="http://www.justajeskova.com/">www.justajeskova.com</a>

The highlight of the annual Phat Wednesday Downhill Series has always been the final race on the calendar, a chainless downhill on A-Line. In the beginning a few riders put on costumes, but these days it's weird to see riders without them as the event has acquired a kind of cult status among the gravity set.

Ironically, it's also the only event of the series that has its serious side, as the inaugural "F-Cancer Chainless A-Line Classic," a fundraiser for teen patients fighting cancer at B.C. Children's Hospital was held on Aug. 29.

It's a cause that hit close to home last year when Nick Geddes, one of the top young riders in the country, was diagnosed with leukemia. He battled the disease for a year, returning to racing this year as an adult capable of riding with the top downhillers in the Whistler Mountain Bike Park.

Fittingly, he walked away with the overall Men's Open title, which was awarded based on results over the entire eight-race series.

Wearing costumes and riding anything with two wheels, including, mini bikes and trail-a-bikes, 250 riders finished up a summer of bike racing. Adam Billinghurst took the top spot with a time of 4:24.93. Sarah Leishman was the fastest woman with a time of 4:49.59. Mathieu Hebert made a comeback from injury and topped the podium in the Master Male group, and Zander Geddes and Jenna Wilkins were the top juniors.

All season long, organizers kept track of standings, awarding points for each race. The top seven of eight races were counted to crown the series champs in each category.

"We renamed the race this year to the F-Cancer A-Line Classic with a goal to beat last year's $3,000 (in donations). We did it, over $3,500 was raised through a live auction and raffle tickets," said Phat Wednesday organizer Seb Fremont.

As a final wrap to the season, Richard Martin won the grand draw prize of a 2012 Giant Glory DH Bike. Each time a racer competed in the Kokanee Phat Wednesdays, their name was put into the draw for the bike. Racers had to compete in a minimum of three races to be entered.

"It totally was an amazing season. We exceeded our expectations. This year was the first year that we had every race with over 200 racers, and that was a huge achievement," he said. "And they keep coming back and having a blast, which is a big key to the success.

"It's probably one of the only race series out there, if not the only one, where you can race against your buddies, but at the same time you could have World Cup athletes there, like we had with Jill Kintner (at the last race). We've had multiple World Cup athletes at these events."

There are a lot more women drawn to the race, taking part by the dozens thanks to the women's program in Whistler.

"Which is great. In all our numbers this year, one of the biggest classes that grew in size was our women category," Fremont said.

"What I think is happening is women are doing the women's nights, Mondays and Wednesdays, and when they get the basics of biking they get great training at that level. The women are a bit more comfortable riding in the park and they think they want to do a race."

Fremont took the opportunity to thank the Phat Wednesday sponsors and volunteers, and added that organizers were hoping to create the same kind of atmosphere in the fall with a new series of races — Phat Weekends. There are two race weekends planned for September — the first on the 15 and 16, and the second on 29 and 30.

"It will be a similar concept, but we're giving out $1,500 in cash in total prize money per weekend. The registration is going to be a little more expensive but we want to get the word out that if people enjoyed racing this summer they should come and do that Phat Weekend," said Fremont.

For those wanting to prolong the riding summer, Phat Weekends are $30 with a WORCA membership. For more info check out www.whistlerbike.com.

— With files from Andrew Mitchell