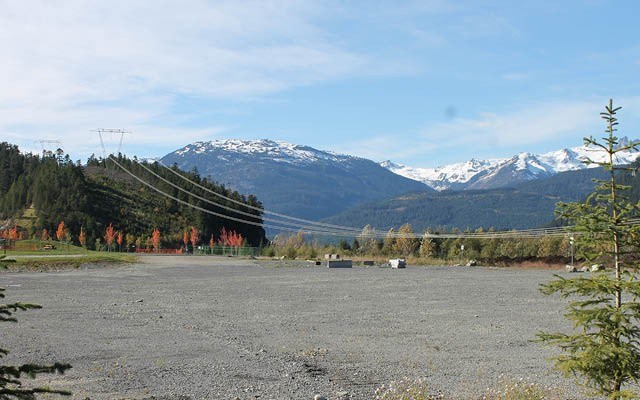 Right site Whistler BMX hopes to establish a track at Bayly Park in Cheakamus Crossing, next to the community garden. Photo by Eric MacKenzie

Whistler BMX has all the dirt it needs to build a track, just nowhere to put it.

Club officials are hopeful that will change in the near future. The municipality has committed to working with Whistler BMX to find a suitable location to build a course as part of the resort's Recreation and Leisure Master Plan, a draft of which appeared before council earlier this month.

Brian Finestone, track director and a founding member of the club, said all that's needed is the green light on a location before construction of a course could begin.

"We've got enough dirt to actually build our track," said Finestone. "We've just cached it in a good storage place where it can shed water over the winter so that if we were to get permission... we would start moving dirt in the spring time.

"Basically, what we're waiting for is the final outcome of the recreation master plan."

Whistler BMX has its sights set on one location in particular at Bayly Park, between the community garden and HI-Whistler Hostel, that Finestone said would be the perfect setting for a track, and a spot that wouldn't be coveted by many other recreational groups.

"It's not quite flat, which is probably why it doesn't appeal to that many other sports," he said. "For a BMX track, flat is actually not what we're looking for."

Finestone noted that there would be some design and construction challenges with the site because the membrane covering the former landfill under the park would need to be taken into consideration. But finding suitable space is likely to be a challenge anywhere in town, and the club sees a lot of qualities it likes in its preferred location at the Cheakamus Crossing park.

"We'll take whatever we can get, but that spot's great. BMX tracks work great when they're in a neighbourhood where lots of kids can come and ride them every day," said Finestone, who highlighted several other positive attributes, including parking availability and proximity to other recreational activity at the park.

"There are a number of really good things that would benefit the Cheakamus Crossing area and it would fit the footprint well."

With a huge BMX community already established in Squamish since its track opened in 2007, plus another one growing up in Pemberton following the completion of a new course adjacent to the community centre, Finestone said a track going up in Whistler would create "a really strong corridor" for the sport.

"That would just make it so that BMX is like any other higher-end sport around here," he said. "It would be recognized, there would be a following and it wouldn't be inconceivable to have 60 to 150 people come to each race at each track, which is great for all three communities.

"I think the people that have been excited about having a track here have been excited ever since the Squamish track went in. I think what the Pemberton track does is that it's sort of switched on the light in Pemberton and there's a whole lot of new interest and new riders there."

In the meantime, the club is continuing to work on a management plan for the track, so that one is ready to put into action once the municipality approves a site. Following that, Finestone said fundraising efforts would kick into gear to help pay for items such as a start gate and other necessary equipment.

Municipal Hall launched an update process to the Recreation and Leisure Master Plan earlier this year, which has resulted in a current draft that was crafted after extensive community engagement.

The 10-year vision for recreation planning includes dozens of draft directions for consideration. Strategies to increase use of the community's playing fields, the development of multi-use trails, improvements for cycling experience and the revitalization of Whistler's skate park are just some of the recommendations outlined in the plan.

Visit www.whistler.ca/recmasterplan to view the draft plan. The final version is expected to come back to the council table in November.