Skiing and snowboarding are inherently risky activities. I know because, well, I'm not totally oblivious to the obvious. Unfortunately, many oblivious people apparently ski and snowboard.
Apr 19, 2017 6:00 PM By: G.D. Maxwell 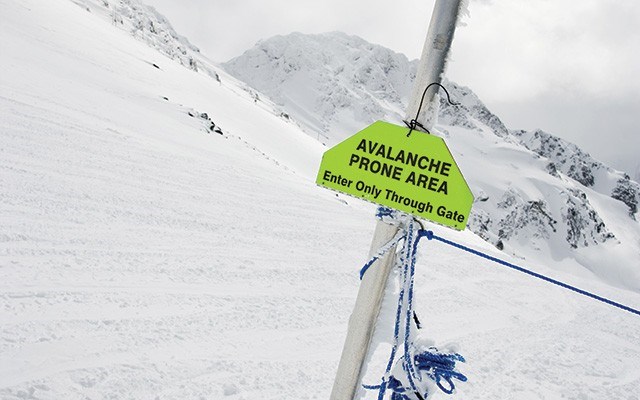 Skiing and snowboarding are inherently risky activities. I know because, well, I'm not totally oblivious to the obvious. Unfortunately, many oblivious people apparently ski and snowboard. That's why you can't get near a ski mountain without being bludgeoned by waivers of liability. You are asked to read and sign one when you buy any kind of multi-day pass. There's one on the back of your day ticket. No one ever reads those but lawyers believe — and argue in court — that it amounts to implied consent, as though simply having it on your person magically transfers the information contained therein to your brain. There are multiple waivers posted on signs around the base lodges. Waivers, waivers, waivers.

In nearly 20 years of presenting them and making people sign them and telling them they were waiving certain legal rights, including the right to sue the MotherCorp, I can count on both hands the number of people who ever took the time to read them. Those people were either second-year law students or very cautious people. The folks in line behind them had other names for them, understandably.

Can't say that I blame them.

Waivers are written in dense legalese by lawyers who lost the ability to communicate in understandable English — or French — shortly after entering law school. To actually read one takes more time than almost everyone wants to spend to get their pass and get up the mountain. It also takes stamina to get past the boilerplate and gobbledygook and, if not a legal education, a profound understanding of legal terms of art to make any sense of them whatsoever. But if you stuck it out through all the mind-numbing rhetoric, you'd get a chuckle at the end when you read you were not only letting the MotherCorp off the hook for their own negligence but you were also holding the Queen harmless. No wonder she sleeps so well.

But right up front, at the beginning, in bold letters, the waiver says, "I am aware that skiing, snowboarding... involve many risks, dangers and hazards..." It then goes on to list a multitude of those risks and dangers, a number of which many people would never think of. One of them, enumerated early in the list, is avalanches.

Now that the MotherCorp is a subsidiary of the U.S. BigBorg, the new waiver is even scarier and lists way more hazards and, like a package of cigarettes, begins with the very prominent statement, "I understand that skiing, snowboarding... CAN BE HAZARDOUS AND INVOLVE THE RISK OF PHYSICAL INJURY OR DEATH." Given the litigiously cautious U.S. legal system, I'm kind of surprised they don't have a picture of some mangled corpse accompanying the warning. I haven't read far enough to find out if they still protect the Queen but given the Anglophobic tendencies left over from the U.S. Revolutionary War, I wouldn't be surprised to discover she was on her own now.

So what's the problem?

I don't have one, except maybe the idea of letting any business off the hook for its employees' negligence. But Richard Kinar has a problem. Several, apparently.

Richard's a safety advocate. And I'd like to say right at the beginning, he's done commendable work in establishing standards for ski helmets. The helmets that used to be sold provided just slightly more protection for your head than egg shells do for what's inside them. That having been said, he's also been a pain in the ass advocating for mandatory helmet usage, as in you can't ski or board unless you wear one.

I choose to wear a helmet. I've worn one since the day I thought I was going to slide head first into a bunch of rocks on that lovely pitch just past the "Cliff" sign in Bagel Bowl. The operative word here, however, is choose. I choose to wear one. If Richard were successful in forcing me to wear one, I'd stop wearing one. Then I'd saddle up Rocinante, grab my battered lance and ride off in search of another joustable windmill. Quixotic, if you need a hint.

But now, Richard's demanding the MotherCorp — and by extension every ski area — do the impossible: make inbounds avalanches disappear and make even the most oblivious skiers and snowboarders aware of all the dangers... all the time... everywhere. Oh, and let them know the moment anything happens that may, or may not, pose either a risk to them or, well, be of passing interest.

It started a couple of weeks ago when some cornice gave way and there was an inbounds avalanche off Chainsaw Ridge on Blackcomb. Richard found that "unacceptable." He said, "What happened on Chainsaw Ridge the other day was predictable and preventable and we're really lucky that nobody was killed. There have been many, many inbound avalanches this year in areas of the mountain that shouldn't have been opened. When you're skiing inbounds, you expect that snowpack to be managed."

He was also very uncomplimentary that the MotherCorp didn't have the mechanism in place to tell everybody that may or may not have been interested in the slide that it happened. Immediately after it happened. Not the next day. Responding to that egregious lack of instantaneous communication, he said something about people not bothering to read about the risks associated with skiing. That they just wanted to get on with it and ski. Obliviously. Kind of the same attitude they adopt when they're going to, say, a shopping mall.

I find that unacceptable. OK, objectionable.

Without delving into the very complex science behind spatial variability and what little we actually know about it for certain, I applaud the work the patrol and the mountains' avalanche forecasters do to keep inbounds terrain safe. There are damn few ski areas in North America that offer the sphincter-tightening terrain Whistler and Blackcomb do and the concomitant challenges to make it safe.

Safe, not fool-proof, not perfect. Perfect doesn't exist in any snowpack. Fool-proof doesn't exist when you let fools play in potentially dangerous terrain.

The slide Richard called predictable was. Sort of. So is the mother of all earthquakes that's going to happen some day when the North American and Pacific plates move quickly enough. But the fact it's predictable does not begin to suggest anyone can predict when or how or where it's going to happen. The charge is meaningless.

And as far as being fool-proof, Gilles Valade, executive director of Avalanche Canada said it best, "There is an onus on individual users, groups and clubs to make themselves familiar with the resources (about avalanches) available." If you want to be oblivious, go to the mall. If you want to play in extreme terrain, bring your brain... preferably snug in a helmet.

But it's your choice.