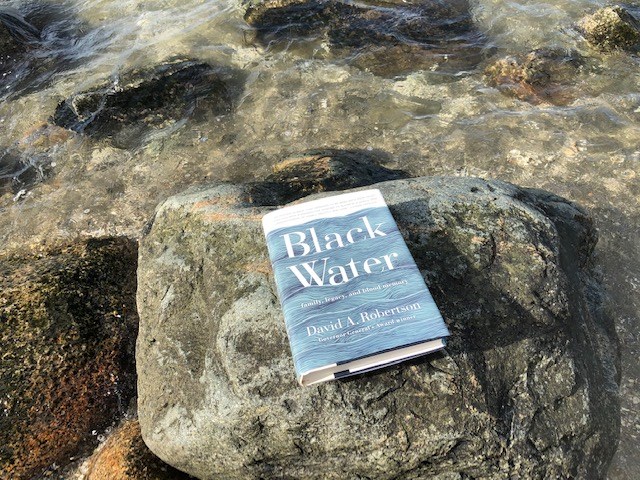 David A Robertson is well known for crafting award-winning young adult literature and graphic novels, and for his work as an Indigenous educator and podcast host.

Black Water, Robertson’s first memoir, is a departure from his previous works, but vividly brings to life his own journey as a young man seeking to understand his Indigenous heritage and the choices his father made that took him away from his wife and three sons for almost a decade.

The author’s father, Donald Alexander Robertson, grew up in northern Manitoba living off the land with his family where they tended a trapline. Don learned from nature, and from other Cree families that shared the same Indigenous way of life, until 1945 when Don’s parents were forced to register him in school, forcing then to leave their trapline and move to Nelson House, Man.

David Robertson, in stark contrast to his father’s young years, was raised mainly by his mother in a comfortable white neighbourhood in Winnipeg, entirely unaware of his father’s Cree heritage and the elder’s early years in the bush of northern Manitoba.

When Don Robertson shares with his son, “I want to go to my trapline one last time” David senses that the request is more than just an opportunity to accompany his 80-year-old father on a river adventure, it is an invitation to step into the past, to understand the family’s heritage and its connection to the land.

Robertson deftly weaves several powerful and societally relevant themes together in Black Water. He skillfully layers the dark history of residential schools with his father’s inspiring story as a minister, dedicated Indigenous advocate and tireless educator. He also shares his own struggles with anxiety.

Black Water is an adventure story, a travel memoir, a dedication, and a richly rewarding read.

“What I’ve always wanted—is to figure out how this life, my life, and our relationship shaped who I am.” Black Water is not only the “answer” to Robertson’s own questions it is also a generous gift, a deeply honest and raw window into a father and son relationship, the history of a family and a man’s understanding of himself and his place in the world.

Black Water is truthful, emotional, sad and joyful and a truly beautiful read.

Nicola Bentley is a Whistler-based writer and mindfulness facilitator whose travel articles and book reviews have appeared in Pique and Canadian Authors Anthology 2014. Her latest project is a memoir that tackles the themes of uncertainty, re-invention, and finding one’s true purpose.

David A. Robertson appears in the Literary Cabaret Oct. 16, 6 p.m. He will also teach a free workshop for youth, “How Do You Become a Writer?” Oct. 18 at 2:30 p.m. For more, visit festival.whistlerwritersfest.com.

Whistlerites head to the polls today
Oct 24, 2020 8:23 AM
Comments
We welcome your feedback and encourage you to share your thoughts. We ask that you be respectful of others and their points of view, refrain from personal attacks and stay on topic. To learn about our commenting policies and how we moderate, please read our Community Guidelines.