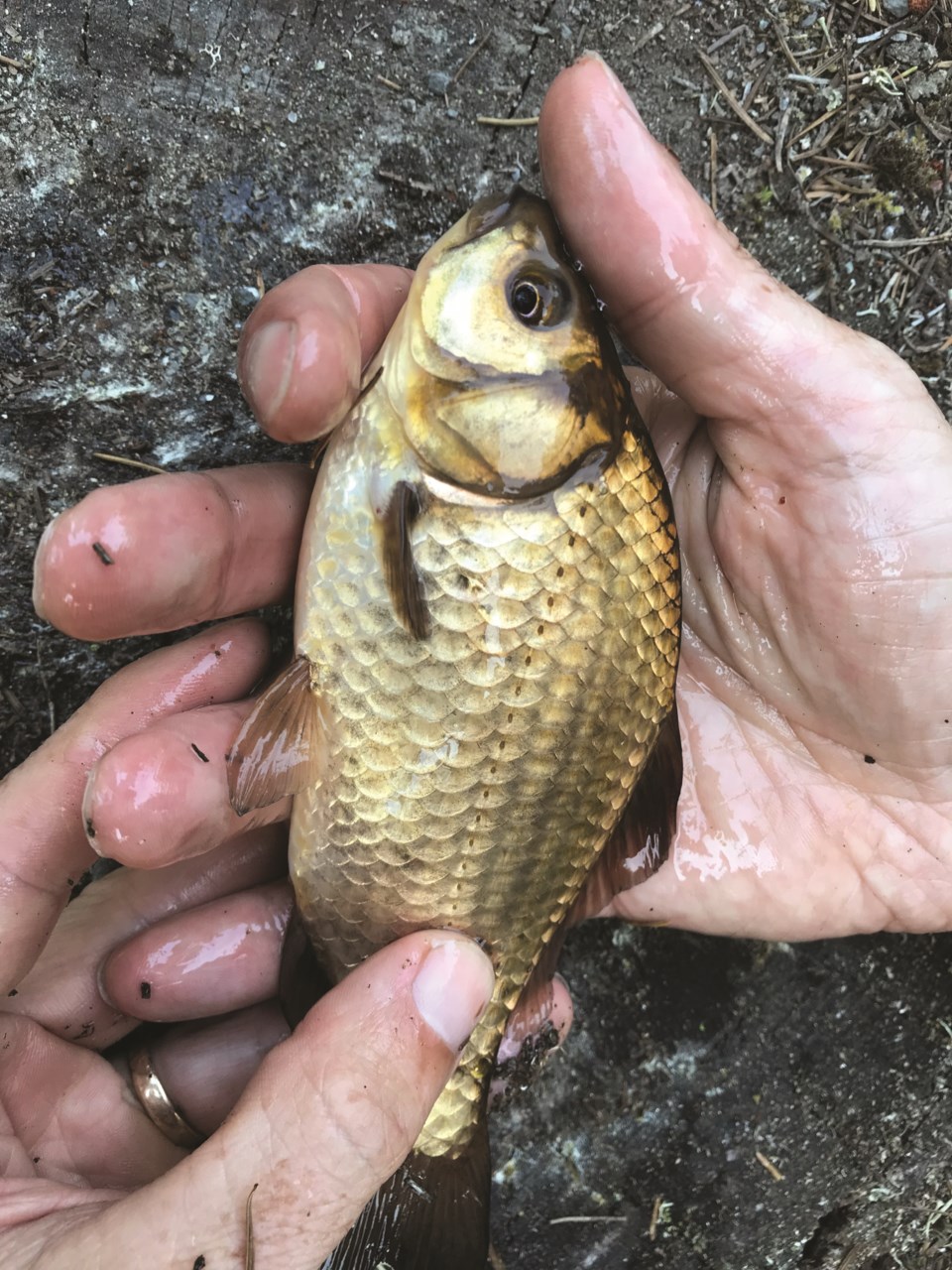 A goldfish that was found in Pinecrest Lake in 2018. Photo submitted

Until recently, it was something of an urban myth amongst Whistler’s environmental types and nature lovers that there are goldfish and koi—both invasive species—in Alta Lake and other local water bodies.

“We had heard rumours for a few years that people had seen the occasional orange fish, and we never really got any photo evidence or confirmation of the species ID,” said Clare Greenberg, executive director of the Sea to Sky Invasive Species Council (SSISC).

“Until, I think it was two years ago, one of the Whistler municipal staff members personally observed them [in Alta Lake].”

This summer, numerous sightings of both fish (which can be hard to tell apart from a distance, Greenberg says) have been reported to the SSISC, prompting the organization to put together a fact sheet about the pesky invasives: ssisc.ca/wp-content/uploads/2020/09/Goldfish-Factsheet-2020.pdf.

The fish have been spotted in Alta Lake, Jordan Creek (between Alpha and Nita lakes) and even One Mile Lake in Pemberton, Greenberg said.

It’s not a new thing, she added; invasive fish have been in local waterways for years, including in Pinecrest Lake south of Whistler, which has an ongoing goldfish infestation with “quite severe” impacts (see “Goldfish discovered in Pinecrest Lake,” Pique, Aug. 24, 2018.)

“Because they’re detritus feeders, they essentially will swim along the bottom of the mud and sort of eat up all the decomposing vegetation and whatnot,” Greenberg said, adding that the fish create a turbidity in the water, muddying it up and in turn impacting native plants and fish.

“So they both outcompete native species and they also prey on native species, and the shallow, vegetated habitat can change when goldfish are there, in terms of water quality and turbidity.”

Left to their own devices, the goldfish and koi populations could have immense impacts on the native ecosystem, changing the dynamic of both the number and diversity of fish and amphibians currently present in the lake, Greenberg said.

And addressing the problem is complicated.

There are essentially two methods for dealing with the invasive fish, Greenberg said: mechanical methods like fishing, netting or even electrofishing, or using a piscicide—essentially a pesticide that kills fish.

Adding chemicals to Whistler’s waterways is a non-starter, and with mechanical methods, “you’ll never achieve eradication, particularly because goldfish and koi are really good at evading those kind of methods,” Greenberg said.

“I guess the message here is that we’re probably going to be stuck with these fish for the long term, and hopefully we can work with provincial government staff and local municipal staff on a plan to just continually suppress the population, so that it doesn’t become super impactful.”

The message for the general public is to report all sightings of the fish (at ssisc.ca/report); to never release goldfish or other pets into the wild (which can net you a fine of up to $100,000); report incidents of illegal release to 1-877-952-7277; and know and follow the rules specific to the lake you’re visiting.

“It’s really important that we can get an understanding of where the fish are, so that we can try and work with the provincial government on coming up with a plan on what can we do about it,” Greenberg said.

“Because unless we have good maps and good knowledge of where the fish are hanging out, it’s really hard to apply for funding or to put together a plan of attack.”

Driver of stolen vehicle arrested after leading Whistler police in chase
Oct 21, 2020 11:27 AM
Comments
We welcome your feedback and encourage you to share your thoughts. We ask that you be respectful of others and their points of view, refrain from personal attacks and stay on topic. To learn about our commenting policies and how we moderate, please read our Community Guidelines.