MONTREAL — One of Canada's best-known religious landmarks, the Notre-Dame Basilica in Montreal, is seeking urgent government assistance to withstand a budget shortfall caused by COVID-19.
Aug 14, 2020 2:18 PM By: Canadian Press 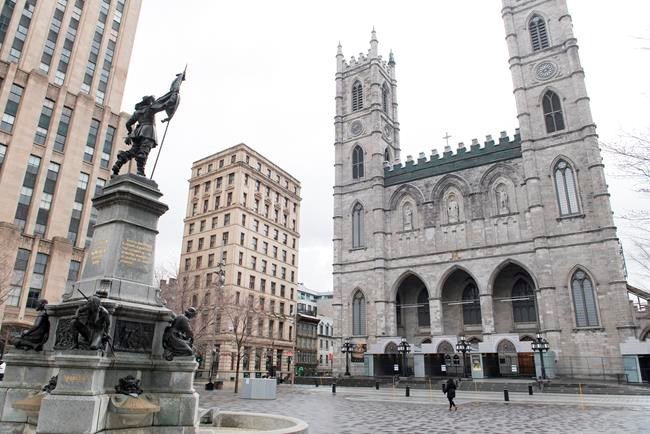 MONTREAL — One of Canada's best-known religious landmarks, the Notre-Dame Basilica in Montreal, is seeking urgent government assistance to withstand a budget shortfall caused by COVID-19.

Claudia Morissette, director of the historic church in Old Montreal, said Notre-Dame expects to be short about $12 million in revenues this year as cultural events and guided visits remain suspended due to the pandemic.

"It's huge. It represents 85 per cent of our total revenue," Morissette said in an interview.

She said that money is "absolutely necessary" to preserve and restore the stone church, which was constructed in the 1820s in the Gothic Revival style and remains one of the main tourist destinations in the city, welcoming around one million visitors per year before the pandemic.

A first phase of restoration work is already underway on its facade, but Morissette said the church is concerned it will not be able to finance the second and third phases of restoration on the building's east and west towers.

These first three phases are expected to cost $9.2 million out of nearly $30 million of total work needed to preserve and restore the building over the next decade, the church estimates.

"We can't press pause (on phases two and three) because that would risk putting the integrity of the towers in peril and (could) even become dangerous," said Morissette, adding that delays on the work could also lead to an increase in overall costs.

Notre-Dame is not the only church in Quebec facing economic challenges due to COVID-19, which has hit the province hard.

Across the province, where the Catholic Church historically played a central role but has seen a decline in recent decades, many churches have struggled to pay rent and maintain their aging buildings as the pandemic forced them this spring to suspend in-person services.

Morissette said Notre-Dame received $1 million last year from Quebec's Religious Heritage Council, a non-profit organization that supports the conservation of historic buildings, to help finance part of phase one of its restoration. But the church did not get any of the new funding.

"We understand that (the money) goes quickly, and we also understand that we're not the only ones," Morissette said. "We know that COVID-19 affected many people — but we're a major attraction. We are one of the major patrimonial jewels."

The Culture Department said in an email Friday it met with representatives of the basilica on July 29 and presented them different funding options for which the church can apply to finance the restoration.

That includes a capital assistance program that aims to help maintain heritage buildings in Quebec, said Emilie Mercier, a department spokeswoman. "The department will receive and analyze any demand for financing put forward by the representatives of the basilica."

"The worry is that if their financial situation is difficult, they will delay these restoration projects, this work, and that will make the situation even more difficult for those buildings," Jalbert-Laramee said in an interview.

She said that while about $40 million is needed to restore and preserve religious heritage buildings across Quebec, the government's $15-million investment is a good step.

"These are interventions that are essential for the survival of these buildings," Jalbert-Laramee said. "We see that the need is great, the need is there."

For her part, Morissette said she remains concerned the Notre-Dame Basilica will not be able to finance its restoration.

While daily masses resumed last month, guided tours and shows that draw tourists to the church have not — meaning Notre-Dame missed out on the summer tourist season, which typically draws hundreds of thousands of visitors.

Morissette called on any of the three levels of government — federal, provincial and municipal — to provide urgent financial aid to help Notre-Dame withstand its losses.

"Because it's the symbol of the founding of the City of Montreal, that it's one of the most well-known religious monuments in North America, that it's the main tourist attraction in Old Montreal ... we need to preserve this gem so that the next generations can enjoy it," she said.

This report by The Canadian Press was first published Aug. 14, 2020.

After long-term care, Quebec private seniors residences a growing COVID-19 concern
Sep 25, 2020 1:00 AM
The latest numbers on COVID-19 in Canada for Sept. 25
Sep 25, 2020 1:00 AM
Comments
We welcome your feedback and encourage you to share your thoughts. We ask that you be respectful of others and their points of view, refrain from personal attacks and stay on topic. To learn about our commenting policies and how we moderate, please read our Community Guidelines.