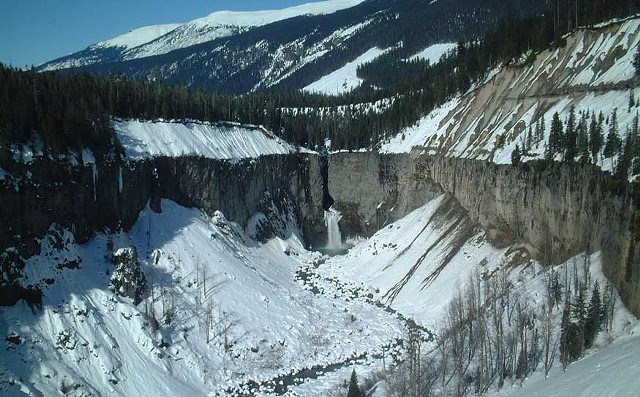 TUP Rejected One of the run-of-river power plants for the Upper Lillooet IPP is located next to Keyhole Falls.

The Squamish-Lillooet Regional District has rejected a request from energy company Innergex for three Temporary Use Permits (TUPs) for the Upper Lillooet independent power project.

All three IPP sites are located in SLRD Area C, around 60km northwest of Pemberton.

SLRD Area C director Susie Gimse said she and two other directors voted in favour of granting the TUPs at the SLRD board's monthly meeting in Lillooet on Monday, June 24. Six voted against.

She said that one of the main issues for the board was that some of the land tenures required from the provincial government had not yet been granted. The tenures cover sites where construction will occur as part of the project. Gimse said the missing land tenures would be for onsite parking areas, access road, and the like.

Another concern was that a parking area near Keyhole Falls, currently used by snowmobilers and where one of the run-of-river intake sections would be located, was designated in the TUP as being where construction would take place.

"Innergex stated they had received two of the permits, possibly last week, but when we pressed them it wasn't clear what the permits were for," Gimse said.

She said that the board felt that Innergex had been "somewhat dismissive of their concerns."

SLRD Area A Director Debbie Demare said she voted in favour of the TUPs on June 10 at the four-member Electoral Area Directors Committee meeting, but changed her mind by the time all the SLRD directors met on June 24.

"What got my antenna up was a letter sent to us by Innergex. It mentioned that they went to our (previous) meeting and found it disconcerting other issues were brought up by other elected officials. I wasn't happy... I found the tone and comments disrespectful," Demare said.

Demare added she had heard concerns expressed by snowmobiling company owners and members of the sledding community, particularly over the fact that the Lillooet Forest Service Road would be ploughed in the winter, limiting use of the area by snowmobilers seeking access to the Hurley Road area.

"This sport generates a lot of economic activity in my area in the winter," Demare said.

Demare followed up the meeting with a call to the Minister of Forests. Demare said the ministry told her they were aware of concerns but were unable to tell her how any restrictions of usage in the land permits would be defined. Ministry staff also advised her that there were considerations for a rerouted road, bridge and parking, she said.

"The situation is that the permits were not in place and I felt this was endangering the interests of the public," Demare said.

A lack of community benefits and amenities was also cited by directors, as was grizzly bear habitat encroachment.

Demare said: "I thought we were putting the cart before the horse. I'm not an anti-IPP person, we have one in my district, but to compare the two companies in terms of approach and respect for the community is like night and day... I am pro-corporate responsibility."

"It was a tough one. I certainly supported community concerns that were expressed," Gimse said. "We look forward to talking to the company about public amenities."

Bas Brusche of Innergex said both they and the Lil'wat Nation made presentations to the SLRD Board prior to the vote that supported the TUPs being granted. He said Innergex had been working on the Upper Lillooet proposal for seven years and that it represented an investment of $400 million.

He said they had received "four different offers for land use permits from the province" and they were expected by mail soon.

"Obviously, we had hoped and expected that the SLRD would approve the TUPs based on the fact that SLRD staff had made a positive recommendation," Brusche said. "But staff were overruled by the board... We were surprised by new conditions being brought up... There are elements of uncertainty here if new conditions are put on the table.

"We got the impression that the board had already made up their minds."

He said that Innergex wants to work with the SLRD and hoped the B.C. government would not find it necessary to use legislation enacted by Bill 30 to force the TUPs through. The SLRD had come into conflict with the company and the province previously over the building of the Ashlu Creek IPP in 2006. The bill, which ultimately wrested control of such decisions from the local government, was passed by the Liberal government because of the conflict.

But a spokeswoman for the Ministry of Forests, Lands and Natural Resource Operations said by email: "the provincial tenures have not been issued, (ministry staff) are not surprised that the regional district hasn't yet approved the temporary use permits... The project needs tenures under both the Land Act and Water Act."

She said the issue of the need for using Bill 30 at this point was "a moot point."

But Patricia Heintzman, chair of the SLRD, said: "It's certainly a moot point for the ministry, but it isn't for citizens feeling disenfranchised from the process. There is no longer a land-use process for local government or a public hearing process."

She said it was clear from the board's concerns that directors "definitely questioned the issuing of the environmental assessment."

The three facilities are proposed as a single hydroelectric project with a combined capacity of 121 megawatts.