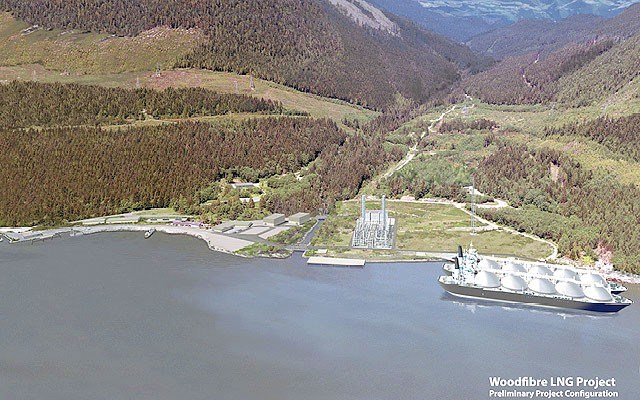 REVIEW HALTED The Environmental Assessment Review process for the proposed Woodfibre LNG project — seen here in this rendering — has been put on hold. file photo

The Squamish Nation (SN) "has no intention" of approving the Woodfibre LNG project — unless proponents can meet 26 environmental conditions.

According to a SN press release, the conditions — decided on after an independent environmental assessment conducted by the SN — are needed to protect sensitive land and marine habitat in the Squamish estuary, in Howe Sound and beyond.

Though the assessment put forward 26 recommendations, the SN has narrowed them down to five major conditions: greater certainty around the environmental impacts of Woodfibre's seawater cooling discharge system (including detailed information about marine life impact and potential alternative technologies), relocation of a compressor station, a guarantee of access to SN members through the controlled access zone of the project to allow for SN practice of aboriginal rights and insurance coverage or a form of bond to address risks of personal loss and injury costs in the event of an explosion or a spill. The project must also avoid impacts in the Skwelwil'wm Wildlife Management Area.

"Call them the top five," said SN lawyer Aaron Bruce in the release.

"Bottom line here is that SN will simply not approve the (Woodfibre) proposal unless all of these conditions are addressed and resolved — to the Squamish Nation's satisfaction."

To enforce compliance, the SN will require the project proponents to enter into a legally binding agreement regarding the conditions, called an Environmental Certificate, the release said.

"Issuing these conditions is quite significant in that the Squamish Nation has been able to identify what environmental issues are important to them and determine how these issues should be addressed from its perspective. The provincial and federal EA processes simply don't allow for that," Bruce said.

The release also states the SN council, representing 4,000 members, will vote to accept or reject the Woodfibre proposal, likely at the end of July.

On June 30, Woodfibre announced it has been granted a temporary suspension of the 180-day Environmental Assessment Review Period. The review period was scheduled to end on July 13, 2015.

The suspension will give Woodfibre time to engage with Squamish Nation on the conditions of its environmental review of the project.

"Woodfibre LNG made a commitment to Squamish Nation to participate in its own environmental assessment process," said Byng Giraud, Woodfibre's vice president of corporate affairs, in a press release.

"As expected, the conditions reflect Squamish Nation's commitment to protecting land, water and heritage, and our focus now is to take the time to review them and work with Squamish Nation to understand their conditions."

There is no timeline for when the Environmental Assessment Review period will resume.

The Woodfibre LNG project entered into the 180-day Application Review Phase on January 13, 2015.

The project is currently undergoing a substituted environmental assessment process in which the provincial Environmental Assessment Office conducts one review for both itself and the federal government.

Once the review is completed the project will require a decision from both the federal and provincial governments.