Airbnb popularity is not just a Whistler problem

Tourism officials look to the 'sharing economy' to take on more responsibility through regulation
Oct 30, 2015 7:00 AM By: Alison Taylor 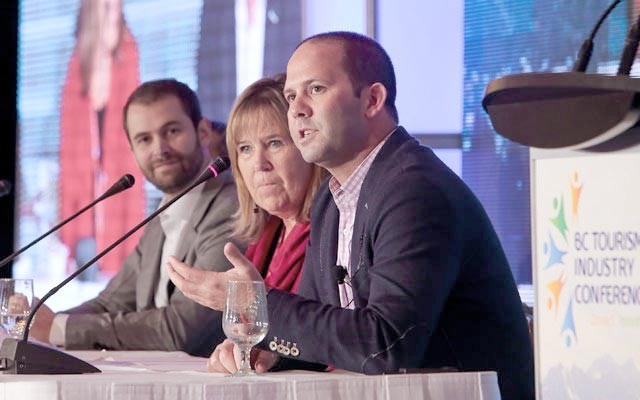 DISRUPTERS OR ENABLERS? Airbnb country manager for Canada Aaron Zifkin and Ingrid Jarrett, past chair of the BC Hotel Association, spark debate at the recent B.C. Tourism Industry Conference in Vancouver. Brad Kasselman/www.coastphoto.com

On any given night, there are about 400,000 people staying in Airbnb accommodations in 180 countries around the world.

The company is seeing explosive growth. It began as AirBed & Breakfast in 2007, when there was a dearth of hotel rooms in San Francisco during an international design conference. Some enterprising — and poor — roommates seized upon an idea, is now a worldwide phenomenon. The numbers paint a compelling picture of success.

"On Aug. 8 this year we had one million guests in a single night and that number is continuing to accelerate," said Aaron Zifkin, country manager with Canada Airbnb.

"The No. 1 reason why people stay on Airbnb... is because they want a local and authentic travel experience. And they want to stay somewhere specifically in the city. That has fuelled Airbnb's growth over the years."

The so-called "sharing economy" for accommodation is here to stay. And it's not just a Whistler problem.

That much was evident at the B.C. Tourism Industry Conference in Vancouver last week where Zifkin was one of the speakers at a lively keynote presentation 'Travel Disrupters... or Enablers?"

The heart of the discussion revolved around the sharing economy — be it accommodation like Airbnb or transportation like Uber — and its impacts on the "traditional economy."

In Canada 86 per cent of people listed on Airbnb are sharing their primary residences.

"These are just ordinary people sharing their homes," added Zifkin.

There are, however, several side effects to Airbnb business — people renting homes in areas that aren't zoned for nightly accommodation as well as the potential loss of employee housing to this new rental market. But the main issue at hand for a room full of tourism operators was simply the uneven playing field.

"We've got an issue," said fellow speaker Ingrid Jarrett, past chair of the BC Hotel Association. "And the issue is: as hoteliers we invest significant amounts of money.

"We're the ones that invested in making sure that person was going to travel around the world. It's our hard-earned dollars that actually make that travel work."

Hotels are not only paying high commercial taxes, but they are also collecting and paying hotel tax and GST on every room — all money that Airbnb does not have to pay, paving the way for Airbnb's lower rates.

While Jarrett applauds the company for making the hotel industry sit up and take notice about the changing needs and wants of its travellers, she also implored Airbnb to do the right thing.

"It is their responsibility to make sure that they actually are paying the taxes that all of us are paying," she said.

Zifkin isn't opposed to playing on a level field; he said the question isn't whether Airbnb is good or bad, rather how can it be regulated in a fair way.

Airbnb wants to participate, he said, to help drive tourism.

"This is where we want to take some responsibility," he said.

"We need to have the regulatory framework in place to do so."

Whistler continues to grapple with the issues around Airbnb and the municipality and partners are looking into the issues.

"There's a desire to embrace these new distribution channels but at the same time ensure there's a level playing field."

That means, Fisher added, ensuring that everyone who is participating in vacation rentals, whether it's a branded hotel, a condominium complex, or a vacation rental by an individual, they are all contributing to the whole.

"Airbnb should be regulated so that taxes would be contributed in the same way that hotels are regulated to contribute," said Mastalir. "Membership with Tourism Whistler should also be required as the marketing activities, and awareness built about Whistler, contributes to the success of attracting guests, whether they choose to stay with a hotel or through a nightly rental on Airbnb. That cost should be contributed to by all parties that benefit, including Airbnb hosts."

Jarrett suggested the Union of B.C. Municipalities lead the charge for change.

"This is 100-per-cent leakage at the municipal level, the provincial level and at the federal level. There is no two ways about it," she told the packed conference room.

The keynote panel also included Michael vanHemmen, public policy manager for Uber, and Mohan Kang, chair of the B.C. Taxi Association. Uber is facing the same criticism at Airbnb — it's simply not a level playing field. Uber is not yet in B.C., but like Airbnb its growth elsewhere has been explosive.