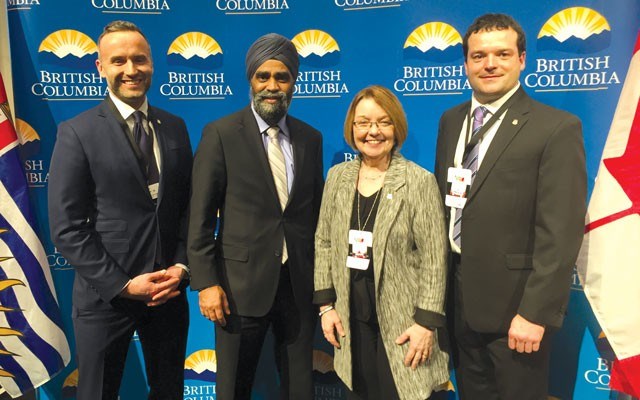 MEETING OF MINDS From left: Whistler Chamber CEO Val Litwin, Minister of National Defense Harjit Sajjan, provincial Minister of Jobs, Tourism, Skills and Training Shirley Bond and Joel Chevalier, VP of employee experience for Whistler Blackcomb. The four met at a reception prior to the start of the meeting. Photo submitted

Whistler representatives left a meeting with federal officials last week optimistic that workforce changes that could positively impact the resort could be in the works.

"My fingers are crossed that they're going to make some changes, or give us some leeway on some of their programs to allow us to continue to operate in the growth capacity that we're growing," said Joel Chevalier, VP of employee experience for Whistler Blackcomb.

"And that's the sense that I got walking out of the meetings, is that that's exactly where they're going."

Chevalier was one of several dozen British Columbian industry, political, education and labour reps who met with federal ministers, including MaryAnn Mihychuk (employment, workforce development and labour) and Bardish Chagger (small business and tourism) on Feb. 3 and 4.

Despite the varied backgrounds among the delegation — from hospitality and tourism to logging and film — Chevalier said they put forward a unified message.

"I felt like the common theme was that B.C.'s economy was diverse and doing well, but that there was some support required from the federal government for this to be able to continue," he said.

"It was consistent across all the industries. It was about access to labour and access to programs that would help increase opportunities."

Support for B.C. industry from the federal government could come in the form of increased opportunities to hire in First Nations communities, reduced barriers around working holiday visas and Temporary Foreign Workers and increased limits for the Provincial Nominee Program, Chevalier said.

"But ultimately, across all industries, the message was there's just not enough people in B.C. at all skill levels — so entry-level skills to high-level skills in the tech industry — to meet the existing demands that are expected to grow over the next few years," he said.

While some provinces struggled in 2015, B.C.'s employment growth numbers were second only to Manitoba — a 1.2-per-cent gain to Manitoba's 1.5 per cent.

The national average was 0.8 per cent.

In its 2024 Labour Market Outlook released in 2014, the provincial government estimated there will be 935,000 job openings in B.C. over the next decade, not including those associated with LNG projects.

"Regardless of how you slice the numbers, from my perspective there's just another big wave of employment challenges on the way that's being driven by demand and supply issues of workers at all skill levels," Chevalier said.

Both Chevalier and Val Litwin, CEO of the Whistler Chamber of Commerce, felt that Whistler's message was well received.

During a full-delegation roundtable discussion, Whistler was mentioned no fewer than four times in relation to its recruitment efforts and workforce needs, Litwin said.

"B.C. really put its best foot forward and was the first province to go to Ottawa as a delegation and state what we are doing to drive the overall economy. The federal government seemed to welcome us with open arms and our message was heard loud and clear that we are a key economic engine for Canada moving forward," Litwin said in a release.

"We want to be leading economic growth, so we're always going to jump to the pump to address workforce needs and we are committed to developing and recruiting Canadian talent, but to meet growth demands we need to look to the federal government for support."

Specific policy asks from the tourism and hospitality industry included: The creation of a stream for seasonal workers similar to the agricultural program that would be accessible to all tourism sectors with seasonal labour shortages; maintaining or increasing the working holiday visa program; enhancing the Labour Market Impact Assessment (LMIA) process by extending LMIAs from one year to three or prorating them based on the number of months that they're valid; increasing the quota for the provincial nominee program pipeline; and increasing overall immigration levels to 1 per cent of the Canadian population (or 350,000 annually).