Braving landfills, dodging avalanches, all for the sake of GPS and geoscience

One of the biggest efforts to map the western U.S. is now underway, but it's a look underground
Aug 29, 2012 9:00 PM By: Pique Newsmagazine Staff 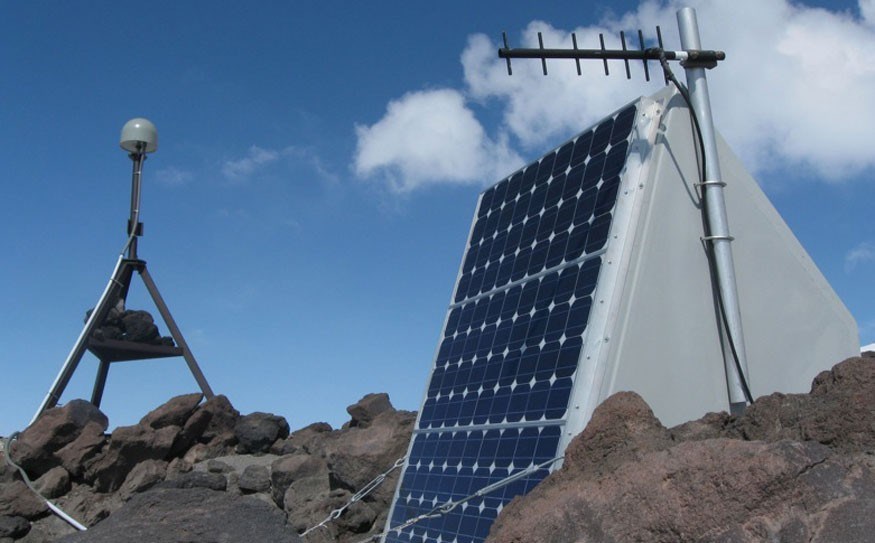 What's underground Earthscope geosensors similar to this one on Mount St. Helens in Washington State are collecting data all over the American West. Photo by Iwona Kelly

On a chilly morning, Fred Jenkins strides across the West Garfield County landfill. Past hunkered-down dumptrucks and mountains of appliances alive with chattering magpies, he stops at what appears to be a tripodal alien spore.

It's a global positioning system (GPS) monument that Jenkins helped install in this sage-speckled swath of western Colorado five years ago. With practiced hands, he replaces the monument's antenna and receiver box, which have stopped transmitting data. "Probably a lightning strike," he muses, scratching his cinnamon-sugar goatee.

Dubbed P031, the station is one in an array of more than 1,100, scattered around the country from wilderness peaks to airports to prison yards. Together, they comprise the National Science Foundation's nine-year-old Plate Boundary Observatory (PBO), a project overseen by the nonprofit UNAVCO, which facilitates geoscience research in the U.S. The PBO is the second-largest global positioning network in the world, right behind Japan's GPS Earth Observation Network.

It's also one of the largest efforts to survey and map the Western U.S. since the Lewis and Clark expedition, says David Kasmer, a PBO field engineer working the Eastern Sierra and the Rocky Mountain states. "Except that we are focused on mapping the interior of the Earth, its inner workings. It's the evolution of surveying."

PBO stations are mostly concentrated in geologically fitful parts of the West and along the North American and Pacific plates' active boundary. The stations — drilled into solid bedrock that lies anywhere from one to 12 metres below the surface — measure motion and deformation of the Earth's crust. Eight keep tabs on the Yellowstone Caldera, for example. And when Alaska's Augustine Volcano erupted in 2006, its five PBO stations transmitted information on vertical and horizontal ground motion from the volcano's flank right up until two were swallowed by an ash flow. Scientists use the real-time data — accurate to the millimetre — to understand earthquakes and volcanic cycles. The work also informs the development of early warning systems.

Though high-tech, the system is built on logistical gruntwork. Because the stations need unobstructed views of the satellites to which they "talk," and because buildings and radio interference can scramble station signals, most are seriously far-flung.

Indeed, the stations require a maintenance crew of engineers as rough and tumble as the landscapes in which they work.

"There aren't too many people like (the PBO engineers), that's for sure," says Jenkins, who's used to troubleshooting complex machinery in tough conditions. After joining the Coast Guard in 1970 ("when ships were wood and men were steel") to bone up on diesel engine mechanics, he was eventually stationed as an engineman on a small ship that tended buoys and channel markers in Cape Hatteras off the North Carolina coast. "Operating any ship is an inherently risky activity," says Jenkins, "but a buoy tender offers up all sorts of unique opportunities for calamity" — fingers smashed under wire ropes, severe weather, crewmates falling overboard.

Field engineering for the PBO, it turns out, has its own opportunities for calamity. Depending on where the engineer works, on-the-job adventures can include everything from run-ins with rattlesnakes, grizzly bears and gun-wielding landowners to bad-weather helicopter rides through the mountains and snowmobile dumps into tree wells.

For example, there are more than 30 stations in Alaska's Aleutian Islands, which, with their large grizzlies, active volcanoes and rough weather, get "really extreme pretty quickly," says Kasmer. To reach some stations in California's Sierra Nevada in winter, Kasmer has to snowmobile part way and then snowshoe or ski the rest to minimize avalanche risk. There are 58 stations in the Mojave Desert — 18 in Death Valley — and 12 above 2,700 metres. Engineers in Yellowstone often rely on packhorse teams to get them to sites, and to access station SC03 atop Mount Olympus in Olympic National Park, crews have to rope together across glaciers.

Even the batteries — four to 12 for each station, weighing 70 pounds apiece — are a hazard of sorts. They must be replaced every five years and are often huffed in and out on the engineers' backs.

Vandalism is a less exciting on-the-job complication. Bear, elk and deer often chew on station cables or rub up against the solar panels or antennae, knocking them out of place, but humans are the real nuisance, occasionally stealing important station components or using an antenna's gray dome for target practice. Once, someone painted one to look like an alien, says engineer Ken Austin, Northwest Region project manager. That station went offline soon after. Cause of death: multiple gunshot wounds to the dome.

There is an 800 number on every enclosure box that goes to "the bat phone" — PBO permitting coordinator Kyle Bohnenstiehl's cell. People "partying on BLM land" who come across a station often call, asking, "What is this thing? What does it do?" Bohnenstiehl says. Sometimes, the callers say, "We're going to destroy it, we're going to trash it!" Bohnenstiehl gently reminds them that damaging government property is a federal offense.

Back at the landfill, a finger of sunshine pokes through the clouds and sets the scrap piles atwinkle. Jenkins dials PBO headquarters on his cell. "We need to see if they can actually reach the station and make sure that it's tracking satellites. Cross your fingers!"

Headquarters reports that the station is back online. Jenkins is free to head home. "Sometimes you will spend 15 hours on the road to do a half hour's job," he says, gathering up his tools. PBO engineers spend half the year travelling, easily averaging 5,600 kilometres a month.

Jenkins, who turned 61 in March, doesn't particularly mind, though. "I've been itinerant just about my whole life, so I'm pretty used to it," he says. Prior to signing on with UNAVCO, he worked for Royal Caribbean Cruise Lines as a drummer in a Latin jazz band. He still moonlights for a couple of rock and Latin bands in Salt Lake City, where he's based. "I'm an out-of-work drummer supporting himself as a PBO engineer," he jokes. Then, serious again, "It's the best job in the world, really. But it ain't gravy, that's for sure."