Cheakamus Community Forest could be first in Canada to succeed with forest carbon project
Sep 4, 2013 10:02 PM By: Andrew Mitchell 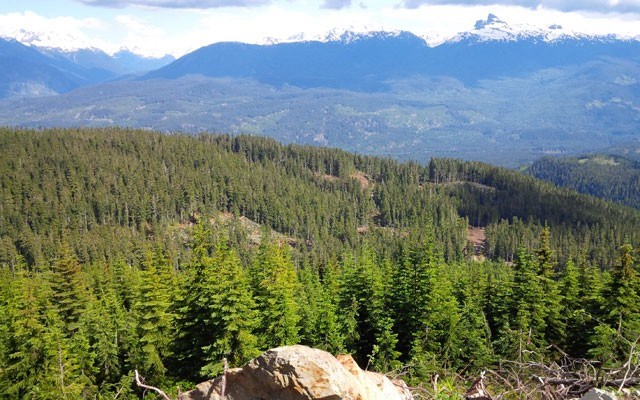 THE FOREST FOR THE TReES This photo from logging operations in the Brandywine area shows how variable retention logging reduces the visual impact of forestry. Photo by Peter Ackhurst

A bid to sell carbon credits in the Cheakamus Community Forest (CCF) is moving forward with a project validation process getting underway that's expected to take between two and three months to complete.

Ecotrust Canada, a charitable organization working to build a conservation-based economy, has been working with the Cheakamus Community Forest (CCF) for the past seven years and has committed to the project. It believes it's the best possible way to ensure a healthy forest for the region and to create a revenue stream that supports low impact forest management into the future.

"The Cheakamus Community Forest could be the first forest tenure in Canada to succeed with a forest carbon project," confirmed Satnam Manhas, Ecosystem Services Program Manager for Ecotrust Canada. He also emphasized that it's been a complicated process to get to this point. "We frequently find ourselves in a place with this project where the rules of engagement have yet to be invented."

Since the creation of the 33,000 hectare Cheakamus Community Forest (CCF) in 2009 — a joint partnership between the Resort Municipality of Whistler, Squamish Nation and Lil'wat First Nation — the goal has been to protect environmental and recreational values, while using low-impact harvesting techniques to meet the provincial government's annual allowable cut requirements. Currently, the CCF is obligated by its forest licence to harvest 20,000 cubic metres of timber per year (roughly 40 hectares), averaged out annually over five years.

However, by using lower impact cutting techniques, protecting other values and cutting less wood than the previous tenure holder, there's a net reduction in carbon being emitted. Manhas said that gap is where the opportunity lies.

The concept for a forest carbon project was first discussed over 2007 and 2008, and finally accepted in April 2012. It required multiple steps along the way, including negotiating an agreement-in-principle with the provincial government that will see carbon revenues shared between the CCF and the province.

The next step, according to Manhas, is to have an independent validator confirm how much carbon can be sequestered in the forest, given the Ecosystem Based Management (EBM) plan that has been developed for the CCF.

Carbon credits sell anywhere from $9 to $19 per tonne, although public agencies like school boards and hospitals have been required to purchase credits from the Pacific Carbon Trust, a Crown corporation, for $25 per tonne. The province is reviewing the program and prices.

Public agencies have been asking for the ability to purchase carbon from the free market. Local governments have also demanded the ability to spend carbon credit funds on local carbon reduction projects to reduce their costs in the future.

Revenues from carbon sales, based on current negotiations with the province, would see 80 per cent of the credits going to the CCF and 20 per cent going to government for the first year, with the province's share increasing over the next two years to 37.5 and 50 per cent.

As Manhas explained, "A revenue sharing agreement for carbon recognizes that B.C. will lose stumpage revenues when trees are left standing; and that the First Nation's partners (Lil'wat and Squamish) on whose territory the CCF tenure operates, and Whistler itself, are agreeing to forego some employment and revenue as a result of reduced harvesting."

The value of this project for Ecotrust Canada is that the carbon credit model developed with CCF may provide a template for other community forests, resulting in a new revenue stream for communities, more funds to support improved forest management and overall reduced carbon emissions.

For that reason, this type of carbon project fits with Ecotrust Canada's mandate to build a conservation economy and assist "proof-of-concept" projects with a triple bottom line — economic, social and environmental benefits — that build local circles of wealth.

However, Manhas noted that every region is unique and carbon credits may not be viable in every situation.

"In old growth areas, which the CCF has a lot of, and where trees can live 800 to 1,000 years old, it's more valuable to keep a tree up than knock it down for carbon purposes, in many cases."

Manhas said that the CCF intends to use its carbon revenues to implement its EBM plan, which may include obtaining Forest Stewardship Council (FSC) certification in the future, and to engage in forest management that could achieve side benefits like reducing fire risk. In 2012, the CCF ran a profit of just $12,000 while missing the provincially mandated target by almost 13,000 cubic metres.

Calculating how much available carbon credits there are in a forest, and predicting these values over time, is a complex process. In order to bring the carbon project to market with funding and carbon modelling expertise, Ecotrust formed a partnership with Living Carbon Investments (owned by the Land Trust of B.C) and Brinkman and Associates.

The project team's evaluations of carbon levels in the forest took into account historic and current management of neighbouring forests in the Soo Timber Supply Area by way of comparison, and factor in what is technically referred to as "leakage" — increased harvest elsewhere as a result of reduced harvest by the CCF, as well as carbon lost to trees that die from disease or natural phenomena like fire, heavy snowfall, wind events, and so on.

The research also looks at how the wood harvested in the CCF is used. Wood that's used for pulp has a higher carbon intensity and lifespan of about 10 years, said Manhas, while plywood has a lifespan of about 65 years — and Richmond Plywood is a major buyer of wood from the CCF.

Everything can be measured and compared, said Manhas, although the end goal should be to keep wood products being developed and used as locally as possible.

"The Resort Municipality of Whistler created their Whistler 2020 Vision to make Whistler one of the most sustainable places on earth. One way they can do that is by using local forest resources for their local building needs," said Manhas.