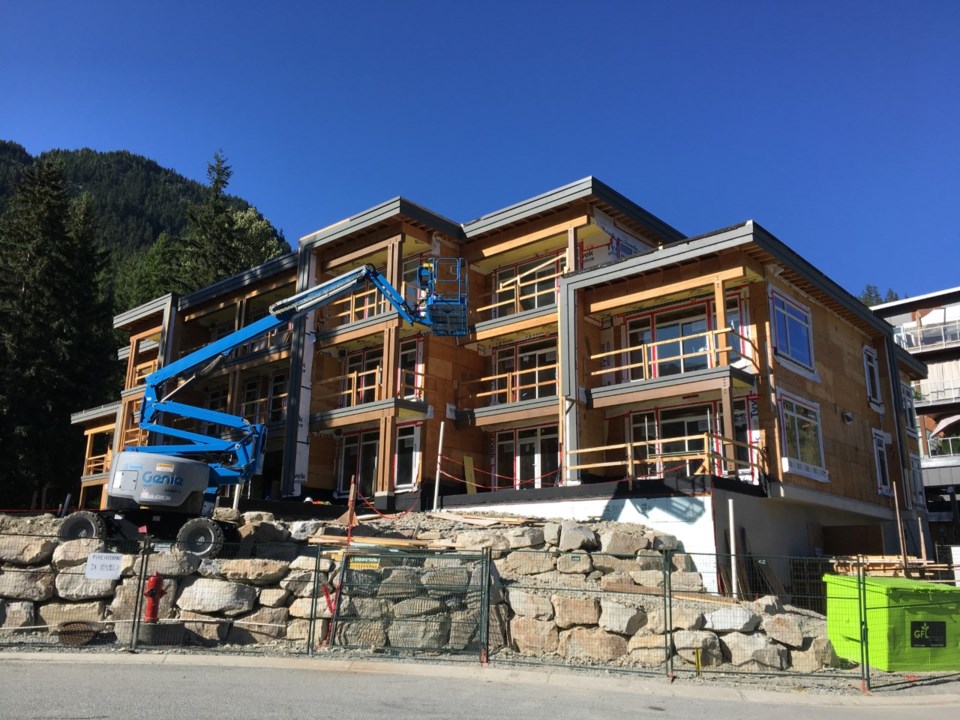 A new proposal from the Canada West Ski Areas Association calls on the province to help fund ‘shovel-ready’ projects in resort communities during the pandemic. A new seniors’ housing building on Bear Paw Trail in Rainbow is pictured under construction last year. File photo by Braden Dupuis

Government officials, scientists and media have all been quick to remind us at every turn just how “unprecedented” the COVID-19 pandemic is. But for as uniquely disruptive as the past four months have been, it’s not the first time B.C.’s tourism industry has sat on the precipice of disaster.

In 1978, the governments of Canada and B.C. established the Tourism Industry Development Subsidiary Agreement (TIDSA), a $50-million investment to stimulate a sector that officials were hopeful could expand to the point of rivalling other globally renowned destinations.

The decision worked. Coming in the form of grants and low-interest loans, TIDSA proved to be the catalyst for many mountain resorts across B.C. to eventually establish themselves as world-class destinations and ultimately helped push skiing into the multibillion-dollar industry it is today.

“Within the province, that laid the foundation of many aspects of the B.C. ski industry that is now a global leader, and from a return-on-investment standpoint, the industry now generates $2 billion a year for the provincial economy, and north of $121 million per year in tax revenue specific to the province,” explained Christopher Nicolson, president and CEO of the Canada West Ski Areas Association (CWSAA).

While the circumstances are different, the Western Canadian ski industry is hopeful for a similar outcome post-pandemic through a CWSAA-led proposal to establish a Mountain Resort Community Emergency Funding Program that, like TIDSA, is aimed at diversifying rural town economies and employment opportunities as well as upgrading infrastructure and tourism assets.

“It really is a competitive world out there, and around the world, more and more countries are competing with Canada,” noted Sun Peaks mayor, ski-industry visionary and original Whistler councillor Al Raine. “We can’t come back post-COVID with the same product and expect that we are going to beat other countries. We’ve got to have better attractions, better tourism infrastructure, better employees and a better product.”

Sent to provincial officials last week, the proposal’s intent is to enable mountain resorts and their host communities to implement “shovel-ready” solutions to their most pressing problems, namely: addressing the immediate impacts of operating under COVID-19; a lack of affordable housing; the ever-increasing cost of building and upgrading infrastructure; and a lack of facilities, services and high-paying jobs needed to attract a year-round workforce.

Whistler’s Brent Harley of mountain-resort design firm Brent Harley and Associates, who helped draft the proposal, said the funding isn’t intended “to create competitive benefits to all of the resorts that may be struggling; it’s more oriented towards addressing affordable housing, sewer and water, workforce issues, liveability issues. That’s where the opportunity lies.”

Job creation will be crucial to the ski industry’s recovery, with more than 100,000 full- and part-time tourism and hospitality jobs either temporarily or permanently lost during the pandemic, and another 120,000 job losses predicted by the end of the year.

“When you start to think about the words ‘sustained’ and ‘sustained prosperity,’ you want a stable workforce. You don’t want to have this constant turnover,” Harley said. “So figuring that out and using that as a model to strive for is key compared to constantly expecting people to put up with it for a year or two and then leave.”

Attracting and retaining a stable workforce will mean recruiting more domestic labour as well as shifting the general perception on the kind of career prospects the industry offers, Nicolson believes.

“As an industry and more broadly as a key driver within the tourism industry, one of the challenges we have is the perception of tourism as being seasonal and not a viable career,” he said. “That is absolutely not the limit of it and does not fairly describe the industry. If you think of the number of trades, whether we’re talking millwrights, electricians, those highly specialized, very talented, highly skilled vocations, or you look at the advancement of culinary, the wine and food industry, and now the opportunities for those people to get trained in those areas and now have a family-supporting career in those communities, that’s something that didn’t exist decades ago.”

Of course, the visitor makeup of B.C.’s tourism and ski industries is also bound to look quite different this winter, and while attracting a broader base of clientele has been an emphasis for ski resorts in the past several years, COVID-19 has accelerated the conversation.

“It’s very easy to point to ski areas and the activities of skiing and snowboarding as being expensive and out of reach,” Nicolson said. “But when you look within B.C., there are 37 ski areas across the province that attract and appeal to a whole breadth of age as well as demographic within the province. That’s a big part of it. That profile of the industry is something we need to improve upon and share within communities.”

Envisioned as part of the province’s $1.5-billion recovery plan, Nicolson said CWSAA is hopeful the funding amount will hit a minimum of $200 million—the rough equivalent, once inflation is factored in, of the $50 million handed out through 1978’s TIDSA program.

But Harley was hopeful federal officials will take a page out of their predecessors’ book by kicking in some money of their own.

“Wouldn’t it be great if the feds could be enticed to match that [provincial] money? You never know,” he mused. “There’s enough of an economic argument when you consider Whistler generates $1.37 million a day in taxes. A big chunk of that is federal taxes and that’s a 2016 number, so that number was even bigger last year.”

And while the proposal is targeting mountain resort towns, Nicolson envisions it as a framework that other rural communities could consider as well.

“That’s the point to the proposal: it’s not exclusive to; it’s inclusive of mountain resort communities and all kinds of other communities,” he said.

There is also overlap with other recent funding requests, such as the $680-million tourism and hospitality stimulus package that was floated last week by the Tourism Industry Association of BC.

Harley recognizes the similarities, and is hopeful “the government will consolidate those and take the best elements out of each and apply them to a solution.”

With his decades of perspective on Whistler as a former councillor and GM of the Whistler Resort Association, Raine had plenty of tips for the community as it navigates the pitfalls and opportunities of the pandemic.

Chief among them: reshaping our perspective on overtourism.

“I’m totally opposed to this opinion that the slightest overcrowding of a tourism facility means we’ve been a failure. In my opinion, it means we need to pick up our pace and get more facilities available for the right number of people,” he said. “We do need an environmental balance between the number of people at an attraction and the carrying capacity of the attraction, but I don’t think we have to light our hair on fire because of the crowding.

“I was once, along with a handful of other nuts, a person who thought Whistler would become a great year-round resort and Whistler has done a hell of a job. I think we should be proud.”