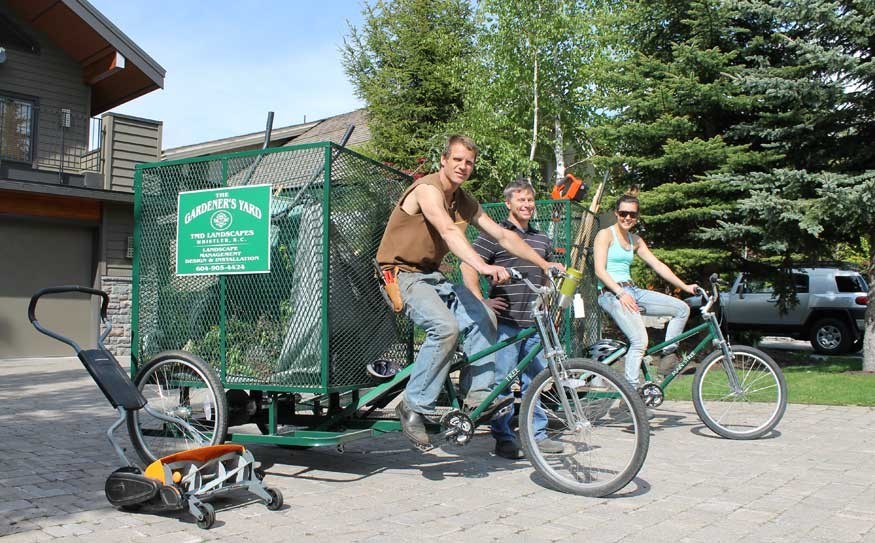 PEDAL POWER Tyler Mosher (centre) flanked by workers Adam Gasquoin and Catroina Blair, recently tested work bikes for his gas-free landscaping business. Other than a battery-powered edge trimmer, everything is manual — and quiet.

Over the years, Tyler Mosher has been phasing out gas — push mowers instead of gas mowers, brooms instead of blowers, shears instead of trimmers and battery-powered edgers instead of the gasoline-powered variety. And now, as of last week, he's found a way to sideline the biggest gasoline user of all — one of his trucks.

Around Nicklaus North, you might have noticed two three-wheel bicycles with large cages in the back crammed with hand-held landscaping tools. Signs advertise that they are the property of The Gardener's Yard Landscaping Service.

So far the bikes have passed the test. His customers like them; his staff like them and his bottom line likes them as well.

"Several years ago I started trying to think of ways to be sustainable and more environmentally conscious, and reduce my footprint," said Mosher. "But the irony is that although we plant a lot of trees and try to be good to the natural environment we also waste a lot of gas. We used a lot of small machines that gave off a lot of noise, pollution and fumes.

"Given that we have a lot of customers around Nicklaus North, we thought it would be a good idea to try using the work bikes, similar to what you'd see in other parts of the world, to do landscape maintenance. Now, with the cost of fuel skyrocketing... it was a logical conclusion to look for alternatives."

There were a few issues to address, like how crews could get a coffee while on break or use the washroom, but Mosher said they've worked through those growing pains. Otherwise, he said that it's been well received and appears to be economical.

"For day-to-day work in a subdivision or neighbourhood, human powered is economically viable," he said. "For bigger jobs like spring clean-ups or renovations it's not economical, but for maintenance and day-to-day work it is the right thing to do. Right now I'm looking at fine tuning our equipment to better suit our needs, and to expand on it."

The reaction from the public, and his customers, has been positive as well. "At first it looks a bit quirky and people wonder if it's tough on the workers, but people do love it and it's putting a smile on their faces," said Mosher.

As for the staff, Mosher said most landscapers are outdoors people or winter sports athletes who enjoy being physical and getting some exercise as part of their work day. Besides, keeping the bikes to flat, self-contained neighbourhoods makes it easy — and compared to loading trucks, it's also easier in a lot of ways.

"You'd get to a property, hop in the back of the truck, unload all your tools, work, load everything back up into the back and then drive a hundred feet to the next property," said Mosher. "It's actually faster this way.

Mosher says the idea wouldn't work in every community. You need local storage, a lot of clients in one place and it helps to have a relatively flat area to work in. However, for a golf course community like Nicklaus North, or neighbourhoods like Spruce Grove and White Gold the bikes work perfectly.

And, as well as saving gas, the landscaping work is almost completely silent. The only equipment they use that makes noise is the battery-powered edge trimmer, but even that makes far less noise that a gasoline edger.

"Gardening should be a peaceful thing, and people should be at ease outside in the environment," said Mosher. "There are times when you'll hear construction, but for day-to-day maintenance there's really no need for all the noise. Push mowers have come a long way, as have a lot of the other (gas-free) alternatives out there. Everything old is new again.

"And it's more efficient. I thought at first it would be more time consuming, but we've just done it and to get through the subdivision takes the same amount of time. They don't have to load or unload machines out of the back of a truck so that's easier, and they don't have to stop to gas up all the time. They can talk without shouting over machines. It's really quite efficient, which was a nice revelation."