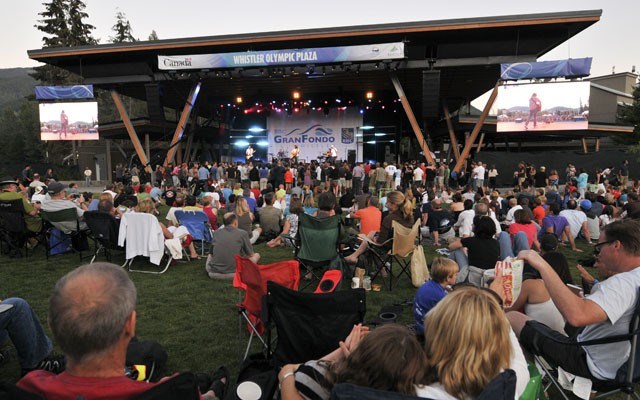 This year's GranFondo after-party at Whistler Olympic Plaza will be unlike any other, as the municipality tests the waters on B.C.'s loosening liquor laws.

For the first time ever the plaza will be transformed into a large-scale afternoon celebration site where alcohol can be served in the presence of minors.

The move comes just as B.C. begins a comprehensive review of its liquor laws in a bid to make practical reforms to the system.

That's going to make a difference to the finish line at the fourth annual GranFondo ride from Vancouver to Whistler on Sept. 7.

"I've just been to events in France and England and the mentality about alcohol in public spaces in Europe is a whole different world," said Kevin Thomson, president of GranFondo Canada, which produces GranFondo Whistler.

"It creates a very nice social atmosphere. It's very relaxed. And I know that we can have that here. I think we're just dealing with some archaic laws that I don't think anybody believes in anymore and we really just need to make things more sensible.

"Having all ages to sit around and to have refreshments is very much like having a picnic at your own house. People don't generally go crazy. I think we can be trusted with this and I'm very proud that our event has been selected as one of the first, if not the first, to experiment with this and I think our crowd will do it up properly."

The Bearfoot Bistro will use its catering licence for the event. Council approved the catering licence, pending approval from the police and fire departments, at Tuesday's council meeting.

Bearfoot's owner André Saint-Jacques, who has held the catering licence for the previous GranFondos, which did not allow minors in the area where alcohol is served, sees this as a welcome change that will improve the overall experience for the participants.

"For a venue of this nature, it does make a lot of sense," said St. Jacques.

"(The Plaza will be) like a restaurant. It's an extension of the Bearfoot Bistro."

The liquor service area is within a double-fenced space encompassing the entire lawn area and the pavilion of the plaza but not the pavement walkway around the lawn. The Bearfoot is requesting a service time from 10 a.m. to 4 p.m. with last call at 3:30 p.m.

The race itself gets underway on West Georgia Street in Vancouver at 6:45 a.m. The pros finish in just over three hours, with average ride times between four and five hours. Some 7,500 spots have been offered this year.

All riders 19 years and older will be identified with a non-transferable coloured wrist bracelet, confirming proof of age. Non-participants can get a bracelet on site with proof of age. There will be security throughout the licenced area.

Future large-scale events like subsequent GranFondos will require approval from council as well as the Liquor Control and Licensing Branch inspector. Approval will be based on the details and merits of each catering request.

"It's a good first step," said Thomson. "We're very happy to be part of that. And we hope people from Whistler will come down and enjoy it with us and show that we can do this reasonably without getting out of control."

Council also gave the green light to the new Canada House restaurant's application to stay open until 1 a.m. from Monday to Sunday.

Council also approved a patron participation entertainment endorsement to its food primary licence. That will allow patrons to dance when there is live music at Canada House, which recently took over the space previously occupied by White Spot.

A portion of the bar area will also now be allowed to sell alcohol to patrons without requiring them to order food.

In a letter to council, manager Tony Medd explained: "...We have had some upset visitors who do not understand B.C. laws and sit at our bar expecting to be able to order an alcoholic beverage without purchasing food and we have to say 'no.'

"We have been managing the location for almost four years, working hand in hand with the Aava hotel. We do not think there will be any adverse impact on the community or our neighbour; if this is the case we will resign our endorsement."

New Whistler middle school still top capital priority for SD48
Sep 22, 2020 12:00 PM
Comments
We welcome your feedback and encourage you to share your thoughts. We ask that you be respectful of others and their points of view, refrain from personal attacks and stay on topic. To learn about our commenting policies and how we moderate, please read our Community Guidelines.