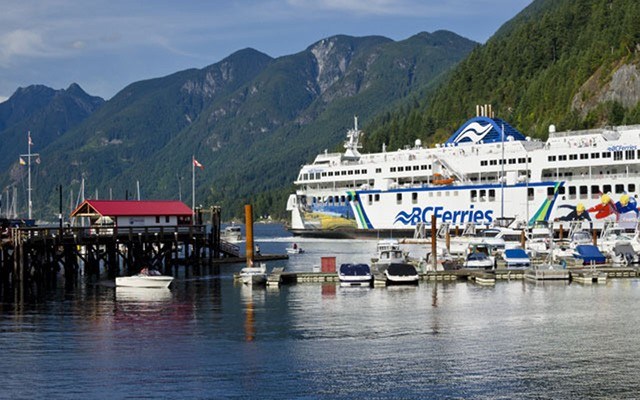 FASTER FERRY BC Ferries operates vessels throughout B.C.'s coast, such as this one in Horseshoe Bay. A direct ferry from Port Hardy to Bella Coola has now been reinstated after it was cancelled two years ago by the provincial government. file photo

The good news is still reverberating throughout the coast area and as far afield as Whistler after Premier Christy Clark announced last month the reinstatement of direct ferry service from Port Hardy to Bella Coola.

"It's really great for the smaller tour operators and the First Nations who are trying to get aboriginal tourism going," Steiner said.

The ferry is expected to be operational by 2018. Previously, there was direct ferry service from Port Hardy until two years ago when it was cancelled by the provincial government, which reasoned it was necessary to keep fares down to ensure the long-term affordability and sustainability of coastal ferries.

At the time of the cancellation, Steiner estimated his bookings for one month alone were down two-thirds from what they were the previous year, while other tourism operators in the area said their businesses decreased by as much as 90 per cent.

Since removing the 115-car capacity Queen of Chilliwack from Route 40, the ministry had replaced it with the 16-vehicle Nimpkish, which offers no extra services and is a much longer 13-hour indirect trip to Bella Coola — which only attracted the most determined tourists, said Steiner.

"Everyone was opposed to the cancellation," said Walt Judas, CEO of the Tourism Industry Association of B.C. "It was a key transportation and supply route."

The cancellation came as small tourism operators were increasingly drawing clients who would take the ferry from Port Hardy straight to Bella Coola and then on to Highway 20 through B.C.'s Chilcotin country to Williams Lake.

"It was a very popular loop — people were going as far as Alberta, all the way up to the Cariboo-Chilcotin and swinging back through the Okanagan," said Judas. "There were so many different things to experience all along the way — it was very popular and many of the resorts cater to that high-end market."

"It's an important piece for tourism and First Nations-led investment," he said. "It is not as developed as it could be. B.C. has one-third of the First Nations tourism in Canada, and there is much more potential."