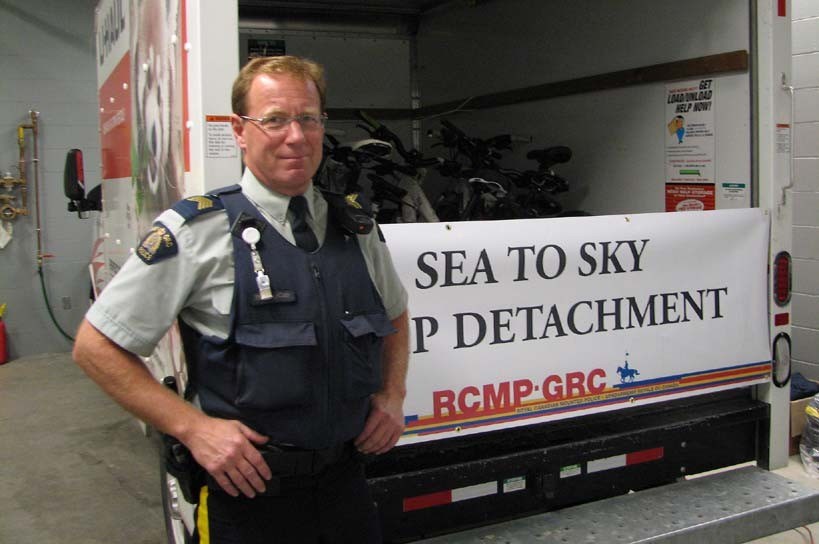 Seven high-end mountain bikes, including a police bait bike with a GPS locator hidden on it, were found in a U-Haul van pulled over by RCMP on the Sea to Sky Highway on Friday morning, Aug. 16.

Whistler Staff Sgt. Steve LeClair said the bait bike was stolen in the resort in the early hours of Friday morning during the Crankworx mountain bike festival.

“We’re quite pleased that it has been successful and we will continue to use the bait bike program not only in Whistler but throughout the Sea to Sky corridor,” he said in an interview.

Whistler RCMP began tracking the bike by GPS after they found it missing, noting that it was travelling southbound on Highway 99. They requested the assistance of Squamish RCMP and the West Vancouver Police Department.

West Vancouver Police set up a road check at Highway 99 and Lawrence Way in West Vancouver and located the U-Haul van travelling southbound. Police checked the U-Haul and discovered that it contained the seven bicycles including the bait bike.

Later, LeClair held a photo opportunity with the bikes at the Squamish RCMP detachment, and said it was suspected that the U-Haul van used to move the bikes was rented fraudulently.

"We will now attempt to located the owners, obviously we suspect the bikes are all stolen," LeClair said, adding that people need to report their bikes stolen.

LeClair said the coordination between detachments all the way out to Sunset Beach was unusual; the last arrest thanks to the bait bike program was within the resort itself.

LeClair said it didn’t surprise him that the two were from outside the region.

“We’re continuing to investigate the two people in custody, one has been arrested for bike theft before in Whistler,” he said. “It’s quite common for people to come up and do that kind of thing.”

It is believed that the bicycles recovered with the bait bike had all been recently stolen in the Sea to Sky corridor and police are requesting anyone with a missing or stolen bike to immediately contact the Whistler RCMP at 1-604-932-3044.