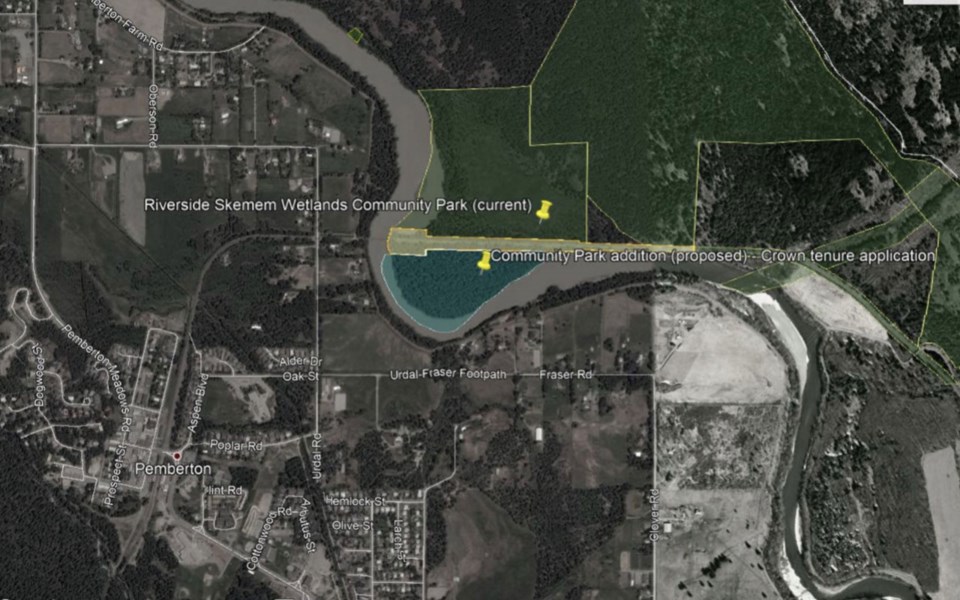 The Squamish-Lillooet Regional District (SLRD) and Lil’wat Nation are hopeful that a proposed tenure application for the Ském’em Riverside Wetlands Community Park near Pemberton Secondary School is successful.

The campaign to secure the 91 acres of Crown land south of the former Fulton lands, which was purchased by the SLRD and its partners in 2012, is open to comment until Sept. 25. To submit a comment, head to https://comment.nrs.gov.bc.ca/applications?id=5f1f313f4c007e0021b10424#details.

Prior applications have been unsuccessful, but in an email, an SLRD spokesperson explained that past holdups to do with access are now clear since the regional district has title on an adjacent property.

“The province considered the site to be water access only and would not approve a water access only park (the railway bridge is not a legal access). As the SLRD now holds title to the adjacent property, we can look to creating access across the tracks from the north either using the existing crossing at Pemberton Farm Road East or creating a new one to the west of existing crossing (SLRD has not started that exercise, it would follow acquisition of tenure),” the spokesperson wrote.

As well, the SLRD is now working in partnership with Lil’wat Nation to maintain cultural sites on the land, which has not been the case in prior applications. (No one from the Lil’wat Nation could be reached for comment by deadline.)

According to the management plan, dated June 6, 2019, receiving the tenure will ensure the protection of Lil’wat cultural sites and traditional uses.

“An Aboriginal Interest and Use Study, undertaken by Lil’wat and SLRD identified that likely utilization of the park included forest utilization, a historic trail, and temporary camps,” the plan says. “In close vicinity of the park is a Lil’wat Nation historic village site called S7áy’anicw.”

Stewardship Pemberton founder Veronica Woodruff sees the proposal in a bigger picture of good work happening in and around town, likening it to the recently announced Ryan River Conservation Area (see Page ??).

“It’s a really important continuation of what’s already happening at Riverside,” she said. “These valley-bottom habitats are really, really important and have direct connectivity into the Lillooet River system and the adjacent wetlands.

“Because we are so dyked and drained here, there are very few areas of natural habitat that exist along the edges of the river.”

Having the preserved area is key for education, especially because of its close proximity to the high school.

As well, Woodruff would be happy to see local management of the space.

“It just allows us to have a more direct contact with a land manager,” she said. “It’s much easier to say to the SLRD or go to the area director and it’s somebody where, it’s Pemberton, it’s small town, and it’s easier to have a discussion about an initiative that might be important to someone like Stewardship Pemberton. It allows for a better conversation in management.

“Hopefully the powers-that-be will see value in that,” she added.

BioBlitz founder Bob Brett said a successful application would be excellent news for the ecosystem, noting that trees such as cottonwoods, cedars and floodplain riparian forest often gets logged, drained, farmed or developed.

“It includes a lot of big, old trees and is a habitat type that has very little protection in the Pemberton Valley,” he said. “It’s a pretty special place and the valley bottom, in spite of [it] being farmed for more than 100 years, there’s still a lot of natural area, but every year, a lot of that is lost.

The BioBlitz festival started in the area in 2014 when it was designated as a protected area by the SLRD.

“This is the adjoining area, so every time we go up there, we do both sides of the railway tracks,” Brett said. “It’s a continuation of the same type of ecosystem. Before the railway tracks, it would have been completely connected.”

Brett added that he hopes that BioBLitz’s work helps further strengthen the application.

“BioBlitz is a way to learn more about an area and, in this case, hopefully provide some rationale for protecting it, just because of the diversity that is found there,” he said.

The full management plan is available at https://comment.nrs.gov.bc.ca/api/public/document/5f1f314d4c007e0021b1042c/download.