Surveys show 82 per cent of attendees satisfied with GO Fest

Whistler emergency doctor calls for clubs to shut down on May long weekend
May 27, 2015 6:03 PM By: Brandon Barrett 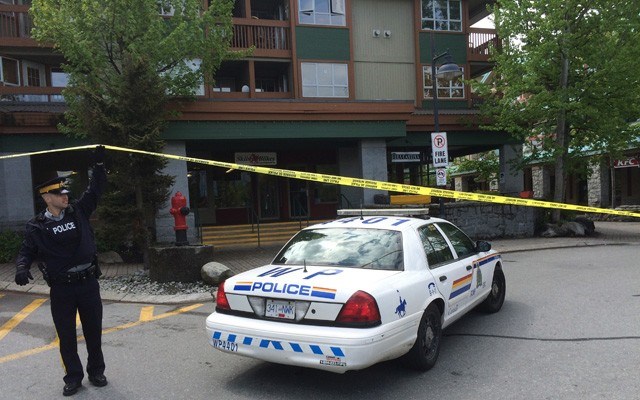 Weekend violence The scene following the stabbing death of Luka Gordic in Whistler on May 17. Clark Lewis, the doctor on call at the Whistler Health Care Centre at the time, is fed up with May long weekend violence. Photo by Braden dupuis

In spite of a pair of violent incidents that grabbed headlines over the May long weekend, the vast majority of attendees to the annual Great Outdoors Festival (GO Fest) were satisfied with the event.

In a survey conducted by Tourism Whistler on behalf of the RMOW, attendees were selected at random over GO Fest's four days to discuss how they felt about the festival and their experience in Whistler.

"It seems like we're doing the right thing," Mayor Nancy Wilhelm-Morden said of the results, adding that three-quarters of the people who were in the village over the course of the weekend "either attended or engaged with GO Fest in some way."

GO Fest drew strong attendance overall, officials said, with guests coming from further afar than in the event's inaugural year — although those from the Sea to Sky and Lower Mainland still make up the bulk of attendees.

"That's the goal: To have these events go from being grassroots to showing up on a provincial, national, continental and international calendar," said Darren Kinnaird, general manager of festival producer Crankworx Events.

Guests came from as far away as Australia, Utah, Wyoming, California, Washington and Alberta to compete, with the Enduro drawing the most diverse field.

One of the goals moving forward, Kinnaird said, is coming up with unique sporting events, citing a "mountain triathlon" as a possible option, that prove to be a draw for destination visitors.

In all, 90 people took part in the GO Fest Enduro, 14 in the Jump Jam, 23 in the disc golf tournament, and 37 in the kayak race. A total of 26 teams ran in the Great Snow-Earth-Water Race, with locals making up 90 per cent of participants.

Wilhelm-Morden expects the festival to be promoted further in advance next year with RMI funding secured until 2017, a move that hoteliers have said will help them attract more families to the resort. Marketing efforts were hampered in 2015 by the timing of the province's RMI announcement, which left Whistler with only weeks to promote the event.

doctor fed up with notorious holiday

A local doctor is calling out Whistler officials after another May long weekend was beset by violence, recommending the resort close all nightclubs for the duration of the beleaguered holiday.

Clark Lewis, the doctor on call at the Whistler Health Care Centre who pronounced 19-year-old stabbing victim Luka Gordic dead on May 17, is fed up with the violence-prone weekend.

"I can tell you anecdotally: I've worked (at the clinic) since 2006 and the only time we see stabbings is May long weekend," he said.

Now, Lewis is speaking out, asking the municipality to take a different approach to curb the unruly behaviour that has become a blemish on the resort's event calendar.

The Great Outdoors Festival, introduced in 2014 as a way to attract a family-friendly demographic and celebrate the resort's outdoor offerings, is not the answer, according to Lewis.

"The goal is to try to make the village unattractive to the people we're trying to keep out by putting families in there, but I can't see how that makes it unattractive for them," he said. "It's putting innocent people in harm's way in my opinion."

The issue, Lewis said, is that the slate of events on the festival's program isn't deterring the young people who are attracted to the resort for its nightlife. His solution? Shut the clubs down.

"The money the muni spends (trying to fill) hotel rooms with families could go into compensating the clubs for being closed," he said. "I don't see how that couldn't work."

Of course, none of the suspects arrested in connection with Gordic's death are old enough to enter Whistler's nightclubs, but Lewis said it's a move that would still deter those of age who come up solely to party and wreak havoc.

A spokesperson for Gibbons Hospitality Group, which operates five of the resort's bars and clubs, was not made available by press time to discuss safety measures it puts in place over the long weekend, although, typically, bars and clubs increase staff significantly to deal with any problems that may arise.

The other issue lies with the accommodation sector, many believe, for allowing young adults to book out hotel rooms and condos for the weekend. The challenge there is that hotels have no way of knowing who will be staying in a room if a parent or other adult books in advance. Also, while some local hotels have instituted a minimum age of 25 for bookings over the holiday, that measure is, technically, illegal.

"Generally, the right to equal treatment without discrimination based on age applies when a person turns 18," reads a Hotel Association of Canada document on labour law. "Accordingly, hotels cannot refuse, on the basis of age, to rent a hotel room to persons who are 18 years of age or older."

There are other measures already in place, however. At the Hilton, general manager Stephen Webb said extra security is hired and guests over the May long weekend are expected to sign a liability waiver.

"It basically gives them their first warning of noise disturbance, disruption or anything like that, and we have a very low tolerance for any issues that are going on," Webb told Pique in an interview last week.

At least one other hotel, according to Wilhelm-Morden, places staff near the building's elevators with a guest list to ensure only registered hotel occupants go up to the rooms.

The municipality's May Long Weekend Committee, made up of representatives from council, law enforcements, hotels and bars, are expected to meet next month to discuss strategies for the notorious holiday.