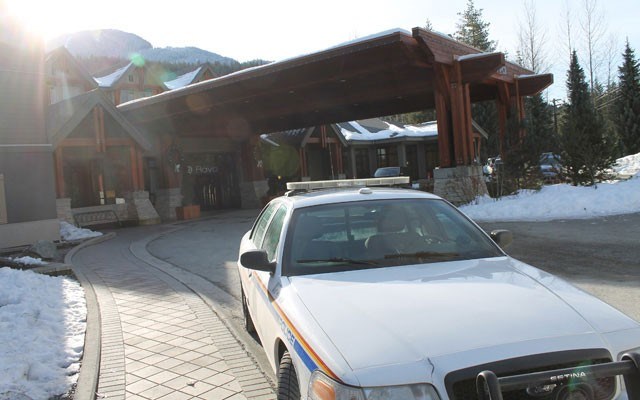 UNDER INVESTIGATION Homicide investigators were on the scene at Aava Hotel after a man died following an altercation early Tuesday, Jan. 20. Photo by Brandon Barrett

One of the only alleged homicides in Whistler's history has rocked the resort after a man died in hospital, following a late-night altercation on Tuesday, Jan. 20.

Whistler RCMP was called to the Aava Hotel just after 3 a.m. where a man was found unresponsive and in medical distress before CPR was administered. The man was later pronounced dead in hospital.

Members of the Integrated Homicide Investigation Team (IHIT) arrived on the scene Tuesday morning to take over the investigation from Whistler police, which said in a release that the incident "was not a targeted attack" and no risk was posed to the public.

At press time, the victim's identity had not been released and it was unknown if a suspect was in custody.

"I do know (investigators are) interviewing a number of people, but I don't know under what capacity they're being interviewed," said IHIT media relations officer Sgt. Stephanie Ashton.

A parallel investigation is also being led by the Independent Investigations Office of B.C. (IIOBC), a civilian body that is mandated to conduct investigations into officer-related incidents of death."In this case, IIO investigators will be working to establish if there was a nexus (or relationship) between the death and an officer's actions. If such a nexus is established, the IIO will sustain jurisdiction," stated a press release.

Ashton pointed to the civilian investigation as a reason why so few details have been released at this point.

"We're in the situation where IHIT is working with IIO, so certain steps need to be taken before we can reveal much about what's going on and we're trying to get through those steps," she explained.

The suspected murder — one of only three in the resort dating back nearly half a century — left the community reeling.

"Out of all the places in the world where you would expect this to occur, Whistler would be the furthest from the top of the list," said Warren Bradford, who is visiting the resort for the first time from Australia.

"It's completely unexpected," he said. "I've never heard of something like this here before and it's not something I'd associate with a mountain-resort lifestyle."

Local Kelsey Bradley was less surprised to learn of the alleged homicide.

"To be honest, I'm not surprised because it was (Martin Luther King) weekend (in the U.S.)," she said. "It happens everywhere but it's just weird when it's in a small town, but there are so many tourists here it doesn't really surprise me, to be honest."

Mayor Nancy Wilhelm-Morden expressed her condolences to those affected and said she doesn't expect the incident will tarnish Whistler's public image.

"You can count the number of times on one hand where we've had this kind of violent incident," she said. "Certainly it's shocking, and the safety of both residents and guests are top priority, but thankfully it is a very isolated incident."

The last homicide to hit the resort occurred in March 2007, when 26-year-old Michael Boutros was killed in the village when a fight broke out.

An RCMP dog team that was in the village witnessed the incident and Shane Richard was captured while attempting to flee the scene.

Richard was found guilty of second degree murder, and sentenced to life with no eligibility for parole for 16 years.

The only other known murder in Whistler dates back to the mid-1960s, when a shooter walked into Dusty's Bar and fired on a patron sitting on a bar stool.

Call it being at the right place at the right time for two RCMP officers who turned a simple drug arrest into a major bust for local police.

The officers were on foot patrol in the village late Thursday night, Jan. 15, when they encountered three males in the middle of what appeared to be a drug deal. "A search of the (two) sellers uncovered dozens of capsules of MDMA and several grams of cocaine packed for sale," said Staff Sgt. Steve LeClair.

Police then executed a search warrant of the suspected dealers' shared residence on Spearhead Drive the following morning and uncovered approximately two ounces of powdered MDMA and an ounce of cocaine along with several grams of methamphetamines, oxycontin and marijuana.

The suspects, 22-year-old and 27-year-old Australian citizens, were arrested on trafficking charges and later released with a promise to appear in court.

The alleged buyer, a 23-year-old Australian living in Whistler, was arrested on possession charges and also released ahead of a future court date.