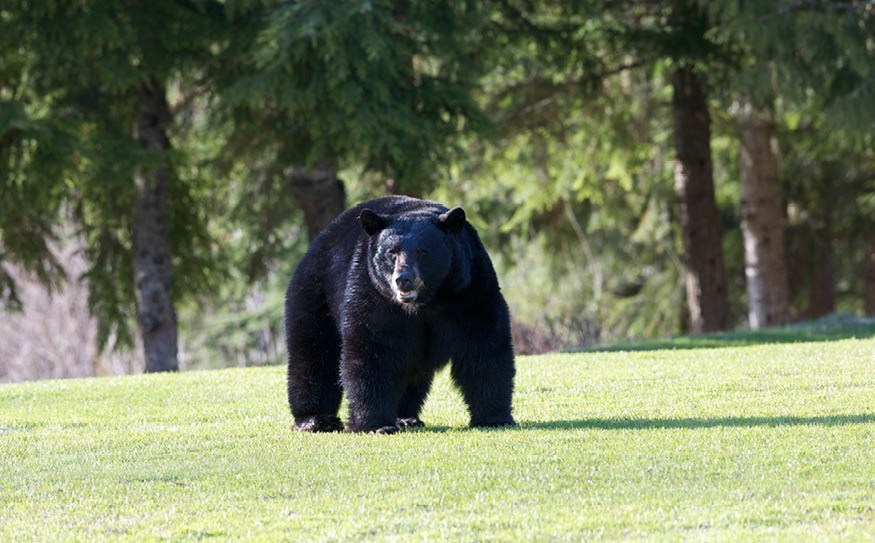 grass pro Males emerge from their dens first in April and females follow in May. Bear researcher Michael Allen says he expects more than 55 bears to populate the area around Whistler this year with 15 to 20 cubs. Photo BY michael allen

On a hot July day I lock my bike to a tree and walk 100 metres to a clearing at the south end of Whistler. Ravens and seagulls command the air space. As I reach the opening a wave of foul air floods my nostrils. From the edge, I look over large trenches of partially buried garbage. I take my usual spot high on a timbered outcrop where I can see the entire perimeter of the clearing.

One bear is already sitting along the berm surveying the area. From 6 p.m. until dark I will identify and count how many bears arrive, feed, interact with each other, and exit or remain into nocturnal feeding times.

The first hour five bears arrive, the second, four bears and in the last hour before dark...the bear's favourite time to "creep in" during the crepuscular or twilight period, nine more bears arrive. Before me are 18 bears. I am stunned. I point my well-used Konica camera at the landfill and snap my largest number of bears to date in one photograph. It is 9:00 p.m. on July 29, 1994.

Now that same landfill is the residential area of Cheakamus Crossing, a micro-community of affordable housing surrounded by hiking and biking trails — all constructed through historic high-use bear feeding and bedding cover intersected with a maze of travel corridors.

There can be little doubt that over the years of Whistler's development the bear population has been forced to adapt and change.

My first night ever at the Whistler dump in 1992 saw four bears in a small pile of garbage. Whistler had not yet begun its development boom, which started in 1994.

From 1994 to 1998, a sub-population of bears developed in the surrounding Whistler Interpretive Forest and Cheakamus River riparian habitats where five adult females established respective bedding areas and visiting times to the landfill. Bear family groups visited mostly in the mornings and afternoons, and males arrived at prime time in the evening, frequently feeding until early morning.

The morning after, I could easily find more than 10 males sleeping on daybeds from half a kilometre to two kilometres away from the landfill in habitats that are now fragmented by Trash, Train Wreck, and Sea to Sky trails.

Resident mothers began producing three-cub litters, which flooded the area with sub-adults (two to three years old) every two years. Aggregations of bears also formed at skunk cabbage swamps along travel corridors into the landfill. Mature and immature single bears, would arrive to wrestle/play and forage skunk cabbage in spring (flowers) and fall (roots). Up to nine different single bears were seen at once.

After 1999, when the landfill was surrounded by an electric fence, I never observed these types of aggregations again.

The move to fence the dump grew out of concern over the number of bears attracted to the area. But over the next eight years bears would still find their way in digging over 100 holes, running or side-stepping through low-pulsating wires (often shorted out by debris), climbing over fence posts and walking through open gates. The landfill at times had a rather ironically humourous scenario of fenced-in bears instead of the fence keeping the bears out.

I ended my systematic counts of bears at the landfill in 1999, but still carried out weekly surveys of bear ID until closure. In 2006, the landfill underwent the closure phase in preparation for Olympic development, which would signal the end of 29 years of bears feeding from an "open" garbage source in Whistler.

Since 1996, I have conducted bear counts in the Whistler Blackcomb ski area and since 2000, the Chateau Golf Course (WB-CGC).

Between 1994 and 2012, the Whistler bear population experienced six poor berry crops, conflicts with residential/commercial garbage and resort expansion, the introduction of clover in high-risk mortality areas, and corresponding levels of bear aggression rippling through the population's competing cohorts.

I cannot describe this population transformation in one or two columns, but I will attempt to describe the dynamic of population change through a number of bear columns this year. I'm no scientist like the government guy — maybe more like an out-of-control PhD student who never once had an advisor — but I have collected an immense amount of data and am getting through it slowly.

In 2012, 57 different black bears (24 males, 21 females, 12 cubs-of-the-year) were counted in Whistler. In the WB-CGC area, 41 black bears were counted: 14 mature males, six immature (one to three years) males, 13 barren females (without cubs), three mature females with cubs, one immature female and seven cubs. Brownie, a middle-aged female above Creekside, produced her second three-cub litter but males killed two of the cubs during the breeding period.

This year, 2013, should see more cubs than 2012 with 13 females due. My count is always in the same area each year so that census accuracy remains high and factors that may skew bear numbers remain low.

Whistler Valley is difficult to census because of logistical constraints (private property), but I still record bear ID when possible. An additional 16 different bears were identified in the valley including Function Junction area with the help of remote cameras.

The Chateau Golf Course provides logistical/moral support and the ski area is the center of the bear-viewing program, so they are an ideal census area providing a window into long-term patterns of bear abundance.

So far in Whistler there are four adult males active.

If you have any questions about bears contact me at mikebear@look.ca.