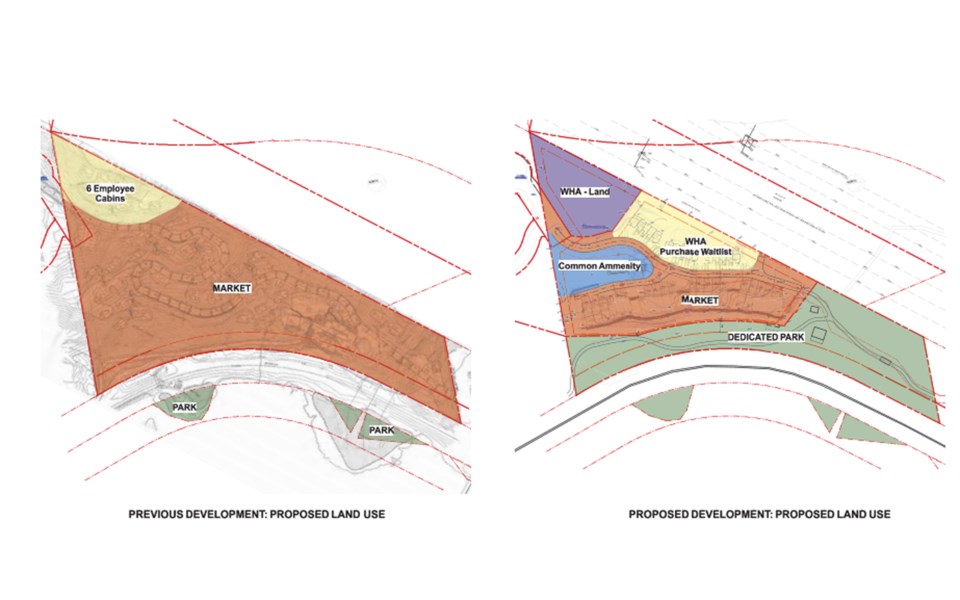 A land-use comparison of the existing Hillman site, left, and the development proposed by Empire Club Development Corp. Screenshot / Resort Municipality of Whistler

Although possible approval is still a ways away, Whistler’s elected officials all voiced support for a mixed-use housing project proposed for 5298 Alta Lake Rd. that has undergone significant changes since it was first seen by council.

“It’s important to bear in mind that the proponent could have come and gotten a development permit to build a hotel and some cabins that no one wanted there,” said Councillor Ralph Forsyth, referring to the uses permitted at the site under the current zoning, at Tuesday’s virtual council meeting. “Is the deal perfect? I don’t know. But we’re getting a lot more than what we would have had they come in to build a hotel and cabins.”

The project initially put forward in September by Empire Club Development Corp. called for 15 employee-restricted units  (eight of which were intended to be maintained by the proponent) and 22 market tourist-accommodation units, which would be zoned for short-term rental.

The proposal garnered significant opposition from Nita Lake residents, whose chief concerns surrounded the project’s density, loss of forestation and possible impacts on traffic and views from across the lake.

The current proposal, first presented to council in February, is for 11 market tourist-accommodation units, 11 market residential units and 21 employee-restricted units, one of which would be maintained by the developer for an on-site caretaker.

The purpose of Tuesday’s report to council was to consider first and second readings of a proposed amendment to the zoning at the site that would remove the hotel and cabin uses and to authorize staff to schedule another public hearing.

As RMOW senior planner Roman Licko explained, the intention of the existing zoning, adopted in 2002, was that any employee units/cabins built would be used by project staff, management and an artist in residence program—and would not have made it to the Whistler Housing Authority’s (WHA) waitlist.

“So we’re actually gaining 20 units of WHA housing that we wouldn’t have seen otherwise,” he said.

The RMOW has said the priority for the employee units would be on ownership, and would be for sale through the WHA waitlist at approximately $425 a square foot. Municipal staff noted the project’s financial pro forma has been reviewed by an independent third party, which found it “to be reasonable.”

The revised proposal also comes with several additional community benefits that were not originally part of the project, including the dedication of a 0.51-hectare land parcel to the RMOW for future development, the construction, at no cost to the municipality, of a neighbourhood park on the site, and a new paved section of the Valley Trail connecting the south parcel line to the north. The RMOW would acquire 1.44 ha of riparian and natural treed buffer zones as well.

The proponent has also agreed to restore and relocate the historic Hillman cabin, also known as Toad Hall, to the new parklands, as well as replace the aging bridge over Gebhart Creek.

Still, there were lingering concerns among some in the neighbourhood, including former Citizen of the Year and one of Whistler’s original councillors, Garry Watson, who wrote a letter to council earlier this month questioning the need for more market housing in town.

“I strongly believe that there is really no current need for further market accommodation in Whistler that would only create an increase in demand for more employee housing, and add to the traffic and occupancy problems in public accommodation already being experienced,” he wrote in his June 9 letter.

Coun. John Grills acknowledged the concerns, but believes the addition of much-needed employee restricted housing is ultimately “a big win” for the community.

“I think when you look at the increase of 24 bed units for market and the balance of what the community is getting, at this point it’s certainly worth taking forward to the public hearing stage.”

Mayor Jack Crompton also reiterated that the project is not a done deal, and encouraged the public to continue to give feedback.

“I hope it leads to an even better development,” he said.

RMOW staff is currently reviewing a traffic impact study and said that report, as well as an environmental assessment of the site, would be made available to the public.

There are also several conditions the proponent would have to meet before further consideration of the zoning amendment, including the registration of a green building covenant, receipt of development plans for the proposed park, and a housing agreement to regulate purchase rates and define qualified employees.