Pair to chronicle life along Trans Canada Trail as ambassadors for Woods Canada
May 13, 2015 6:01 PM By: Alison Taylor 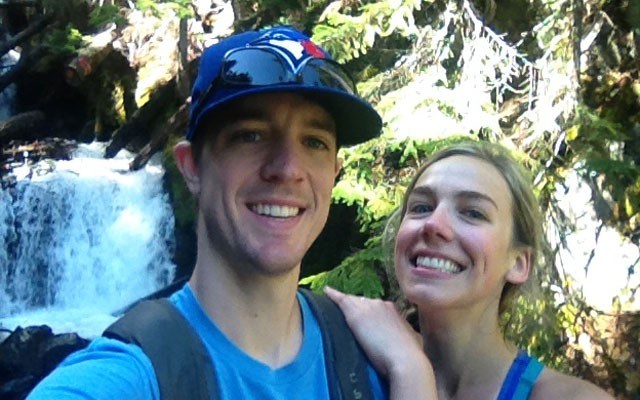 Dream job Magee Walker and Cedric Schell are ambassadors for Woods Canada. They will spend the next five months exploring Canada along the Trans Canada Trail, beginning next week in P.E.I. Photo submitted

In a whirlwind 26 hours, Whistler's Magee Walker and Cedric Schell packed up their lives for five months and hit the road.

That's what happens in the immediate aftermath of winning a national competition to be ambassadors for the "Ultimate Canadian Dream Job" for Woods Canada.

With their regular jobs on hold, and Whistler life packed away temporarily, Walker and Schell will soon be living out of a tent along the Trans Canada Trail with all their gear — sleeping bags, backpacks, tent — provided by Woods Canada.

Despite all the swag, Walker couldn't help but bring along her own water bottle.

"I have this one water bottle that I've carried with me forever," she said, from Toronto where they are waiting before the trip begins next week. "It's been on all my hikes with me in Whistler."

Though he packed very lightly, Schell is now having second thoughts.

"I almost feel like I packed too much," he said.

Early next week the young Whistler couple, who met here two years ago when set up on a blind snowboarding date, will fly out to P.E.I. and begin their adventure/job on the Confederation Trail.

It wasn't all that long ago that Walker applied to the competition on a whim, along with more than 3,800 Canadians.

In the end they were chosen as the ambassadors, along with a couple from Calgary, Melba Seto and Adam Kochanek.

Seto and Kochanek will start on the West Coast and head east, while Walker and Schell, both 28, will begin on the other side of the country.

Woods Canada launched the competition to find Canadians who loved the outdoors. The couples will work for Woods Canada as they hike, climb, paddle and portage across the country testing out products. They'll be sharing their stories via Facebook, Twitter, Instagram, as well as blogging all about it.

It will be a jam-packed schedule, working six days a week, trying to fit in all the places they want to go.

"To be honest, we're out camping every day so it's something that's going to be enjoyable no matter what," said Schell. "Don't feel bad for us!"

They do, however, have a few reservations about the bugs, especially the bugs in Northern Ontario, as well as the weather.

"It comes with the territory," said Walker.

"I think our ultimate goal with this is really to encourage Canadians to get outside and explore the Trans Canada Trail themselves."

Four out of five Canadians live within 30 minutes of the trail, she added.

Walker is a freelance writer and Schell is a paid on-call firefighter for Whistler Fire Rescue Services, as well as a part-time paramedic in Lillooet and a guide for ZipTrek.

The couple is set to return in September after exploring Canada from one end to the other. The Trans Canada Trail is one of the world's longest networks of multi-use recreational trails, stretching 17,000 km. It includes the Sea to Sky Trail — 80 km from Squamish to Whistler.

It is roughly 75 per cent complete.

"I always enter contests... You never know," said Walker. "The only thing holding you back most of the time is you."