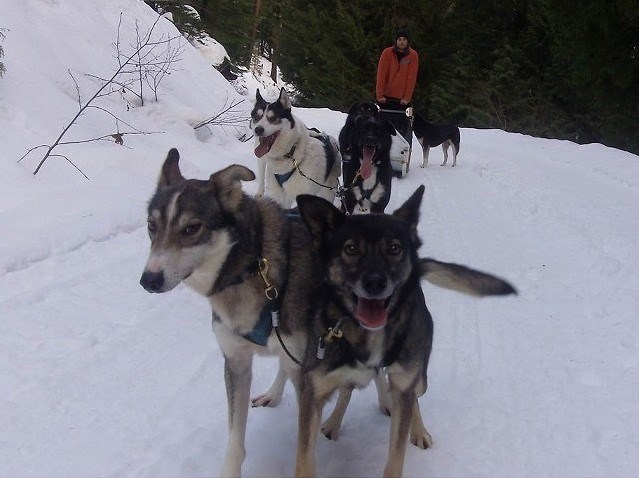 OUT OF WORK The foundation that operated the Whistler Sled Dog Co. has decided to fold up the company and find homes for the more than 80 dogs that make up the kennel. Photo by John French

It started 18 months ago as a bold move to transform the sled dog industry. The Whistler Sled Dog Co. (WSDC) has announced it is folding up operations and handing its dogs over to the control of Whistler Animals Galore (WAG).

Sue Eckersley of WSDC has confirmed that the members of the foundation board who have been overseeing the operation of WSDC voted last week to dissolve the operation and let WAG find homes for the dogs.

According to Eckersley, money has been set aside to help fund the search for new homes and she noted that some dogs could go to Whistler’s only remaining sled dog kennel, which is managed by Jaime Hargreaves in the Callaghan Valley.

“Our dogs were really aging,” Eckersley said in an interview Monday, July 15. “We could have operated again next year and probably we could have broken even. But, in the long term our dogs have lots of medical needs based on their age.”

Shannon Broderick, the executive director at WAG, said she first heard that shutting down the operation was an option on July 10.

“I did have a bit of a heads up before the decision was made,” said Broderick.

She said WAG now has a huge project ahead as the animal shelter works to find homes for the 86 dogs it now has control over at the WSDC kennel just north of Whistler.

“We now have hired staff that are trained and have extensive experience in animal sheltering, animal behaviour and adoptions so they are now working up at the kennel,” Broderick said. “It’s a massive task getting to know these animals and all their different personalities but I’m pretty confident that once they’ve gotten to know each animal then we can start to identify which ones are in need of a little bit more training and behaviour modification in order to transition into a home and which ones are easier to adopt.”

Broderick said she is working in conjunction with the B.C. SPCA to find homes for the dogs. She said that in a typical year WAG finds homes for about 80 dogs so she enlisted the help of the provincial organization hoping that there will be a province-wide response to the effort to find homes for the dogs that no longer have a sledding company to work for. Broderick said she expects most of the dogs will be adopted directly out of the kennel but a few may need to spend some time in the WAG shelter before they find new homes.

“I think the company has done a great job this last year of socializing the dogs,” said Broderick.

The biggest challenge with the sled dogs is the fact that they don’t have any house skills.

“Teaching them to walk on a leash and maybe even in some cases housebreaking and chewing on appropriate chew toys, those are going to be our challenges,” Broderick noted.

She estimated that 10 to 20 per cent of the dogs in the kennel are extremely shy.

“We need to get them socialized with people,” she said.

Anyone who wants to adopt one of the dogs is asked to send an email message to retiredsleddoginfo@whistlerwag.com indicating an interest in adopting a sled dog.

Eckersley said discussions were held with Blackcomb Snowmobile to explore the possibility of the WSDC providing tour services to that company but she said an agreement wasn’t reached. According to Eckersley, there is now just one operational dog sled kennel in the Whistler area, down from three at the end of the winter season. As WSDC seeks out new homes for its aging dogs, Eckersley said she feels there is room for two small kennels in Whistler and there is enough demand to support two with the greatest amount of business taking place over a four-week period around the Christmas holiday period.

Three WSDC employees were impacted, said Eckersley. Two full-time employees were let go along with one part-time worker. She noted that during peak operations the company employed 18 people with most of them laid off at the end of the sledding season.

The WSDC was created when Outdoor Adventures Whistler (OAW) got out of the sled dog business. WSDC took over the dogs after it was learned the previous manager of the kennel reduced the size of the kennel by at least 50 dogs when business slowed following the 2010 Olympic Winter Games. The former manager of the kennel entered a guilty plea to a charge of causing unnecessary suffering to an animal after grisly details of the kennel cull were learned.

Check back for more in print and online on Thursday, July 18.