Whistler's mayor to rally UBCM to Syrian refugee cause 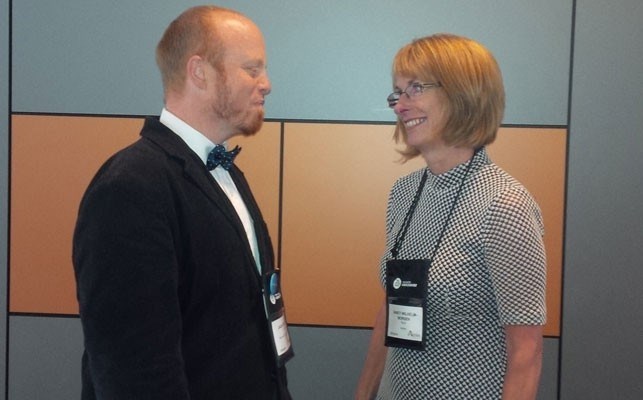 Whistler's groundbreaking humanitarian resolution to help Syrian refugees has been accepted at the last minute as an emergency resolution at the Union of British Columbia Municipalities (UBCM) convention.

It has been admitted for debate on Friday Sept. 25 at the annual convention, which is taking place in Vancouver this year.

To see it get this far, to take the floor at UBCM for three minutes and plead the case, is a big deal for Mayor Nancy Wilhelm-Morden, who was spurred to action after seeing the photo of the lifeless body of three-year-old Alan Kurdi, drowned on a Turkish beach after a failed attempt to reach Greece.

"Me sitting in my little house in Whistler and wringing my hands and saying 'there's nothing I can do about this' when in fact, as the mayor of a town I can, is extraordinarily gratifying," said Wilhelm-Morden from the convention this week. "Even to have just got this far, to be debating this at the (UBCM) on Friday is just fabulous."

Whistler hastily gathered support last week from its neighbours; the District of Squamish, the Village of Pemberton, and the Squamish Lillooet Regional District (SLRD), which joined forces in support of the resolution calling on the federal government to act immediately to accelerate the process for settling refugees and to "significantly increase federal commitments to receive Syrian refugees in Canada, matching or exceeding historic levels."

The resolutions committee at UBCM noted that the membership has not previously considered a resolution regarding refugees from Syria, or federal commitments of humanitarian aid and resettlement.

"It will be interesting to watch it debated," said Pemberton Mayor Mike Richman. "There are some that feel that its not necessarily the mandate of local government to get involved in the policy of the feds perhaps... my personal take is that as elected officials we were given a bit of a voice, so in a situation like this, if we feel it's important, we should use that voice to affect that kind of policy change."

If approved, Wilhelm-Morden said it would send "an extremely powerful message to the federal government."

While there have been some changes of late from the Conservative government, it's not enough, she said.

On Sept. 19, the government said it would speed up the processing of refugee applications. That means the 10,000 Syrian refugees the government previously promised to resettle in the next three years would be brought to Canada by Sept. 2016.

"Still not good enough in my opinion," said Wilhelm-Morden.

The government also said Syrians and Iraqis fleeing their countries will no longer have to prove they are convention refugees under the United Nations Refugee Agency.

The mayor is prepared to hear the reasons why it shouldn't be supported. Whistler will need a majority on the floor for the resolution to move forward.

To the critics Wilhelm-Morden says: "This is just a humanitarian disaster on a scale not seen since World War II. We're obligated to so something."

Check back with piquenewsmagazine.com on Friday for an update.

The Syrian crisis is not the only thing on Whistler's UBCM agenda.

Whistler is also taking its case against the proposed Garibaldi at Squamish (GAS) four-season resort to provincial ministers and staff.

The message to the province is that the proposed resort on Brohm Ridge will push Whistler's occupancy levels and room-rate levels down below financially sustainable levels.

That in turn will impact Whistler's tourism powerhouse, which accounts for 22.5 per cent of B.C.'s tourism export revenue and more than $1.1 million in tax dollars every day to government.

Whistler CAO Mike Furey said he is also highlighting the recent provincial study that contests the GAS visitor project numbers, saying the numbers are inflated by two to three times. The projections also do not account for the fact that most of the visitors will be sourced from Whistler and the North Shore mountains.

"(The project) jeopardizes a proven source of revenue generation, and significant employer, with a risky development that lacks, in our view, and in our interpretation of the province's study, viability," said Furey. "That's what we're trying to put forward."

Furey said often times during the environmental assessment process, the process GAS is currently working through, the government will issue an environmental certificate and then outline mitigation measures to lessen any impacts. The EA process also includes socio-economic impacts.

"I don't believe those impacts (on Whistler) can be mitigated," he said.

Whistler's strategy is to put forward its "evidence-based" position at the UBCM.

"I think the officials are, I believe, willing to listen to our concerns and I think they appreciate the thorough analysis we've done," added Furey. "That's what the environmental assessment process is all about — it is to provide an opportunity for affected parties to put forth their views and have them considered."

Another big issue on Whistler's to-do list at UBCM it to bend the ears of the provincial ministers on its stalled Official Community Plan.

"We are making progress," said Wilhelm-Morden, of the ongoing discussions to move forward with the OCP, which was challenged by First Nations in B.C. Supreme Court last year, and ultimately quashed.

"We're going to report to the minister about the status of discussions and that we'd like our OCP returned and we'd like it returned without the necessity of ministerial approval to amendments."

Whistler is one of just three communities in B.C. that requires ministerial approval of any OCP changes. It's been that way since the beginning; it's the same requirement for Islands Trust and Sun Peaks.

It was this provincial approval that Squamish and Lil'wat Nations challenged in court. The judge ruled that the B.C. government did not fulfill its duty to consult on concerns that the nations had about Whistler's revised plan and the OCP was quashed.

Since then, Whistler has reverted back to its 1993 OCP.

"There are 165 communities in British Columbia and there are three that can't approve their own OCP," said Furey.

"So, separate and apart from the First Nations process, that whole approval process of making amendments, it's a cumbersome process for us to go through when we want to do amendments that all other communities can do on their own.

"We're really hopeful that we're going to find a way of getting the OCP approved through the minister and going forward can we find a way that works for all parties related to our OCP approvals in the future and to make us align more with basically all of the other municipalities in British Columbia."

In the meantime, Whistler recognizes the underlying need to rebuild its relationship with Squamish and Lil'wat.

Furey added: "We have a process where we need to go through building up more neighbourly relationships as a part of addressing some of the outstanding differences between us."