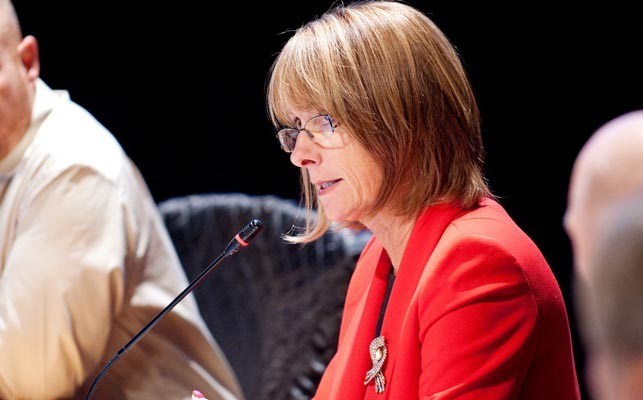 Whistler’s emergency resolution seeking action from the federal government to increase help to Syrian refugees has been passed by members of the Union of British Columbia Municipalities (UBCM) at their annual convention in Vancouver.

It passed on Friday morning, Sept. 25, with roughly 20 votes against it, said Mayor Nancy Wilhelm-Morden.

“All the rest were in favour,” she said.

“It is historic. The UBCM has never passed a resolution before commenting on the federal government’s humanitarian efforts or lack thereof, and the resettlement of refugees.”

The resolution calls on the federal government to act immediately to accelerate the process for settling refugees and to "significantly increase federal commitments to receive Syrian refugees in Canada, matching or exceeding historic levels."

Objections to the resolution included the issue being a federal matter outside the UBCM’s jurisdiction, but many people spoke passionately in favour of it, too.

Whistler was supported in taking the resolution to Vancouver by the District of Squamish, the Village of Pemberton and the Squamish Lillooet Regional District (SLRD). It was submitted to the UBCM at the last minute.

“I feel very, very good,” Wilhelm-Morden said. “It’s a powerful message to the federal government, and we spoke on two occasions with the president of the UBCM… he was very supportive of the resolution and thought it was the right thing to do… he said this is what local governments ought to do when quality of life is effected.”

There were no numbers suggested in the resolution for the amount of refugees who should be brought to Canada, she said.

The next step is to take the resolution to the federal government.

“The UBCM on their own will send correspondence to the federal government. I don’t know the timing,” Wilhelm-Morden said.

“I’ve asked (Resort Municipality of Whistler) staff to send a letter, jointly addressed, to the prime minister (Stephen Harper) and to the minister of immigration (Chris Alexander) enclosing our council’s resolution, the resolutions passed by Squamish, Pemberton and the SLRD, and the UBCM resolution. It will ask that they acknowledge receipt of those resolutions… and provide a response.”

The letter will be sent in the next week.

Also at the UBCM on Friday morning, B.C. Premier Christy Clark made several major announcements during her keynote address.

Clark said the provincial government would spend $10 million on wildfire prevention. The government is also giving $75 million over the next three years to create a new dividend for small communities with populations of under 25,000. The fund aims to help rural communities diversify local economies.

And Clark announced that the Small Communities Fund would accept applications for $90 million fund to support infrastructure development.

- with files by Alison Taylor

Read the full story in the next issue of Pique Newsmagazine or www.piquenewsmagazine.com on Thursday, Oct. 1.