Dry, hot weather keeps pressure on resort to be vigilant when it comes to fire
Jul 31, 2013 9:00 PM By: Andrew Mitchell 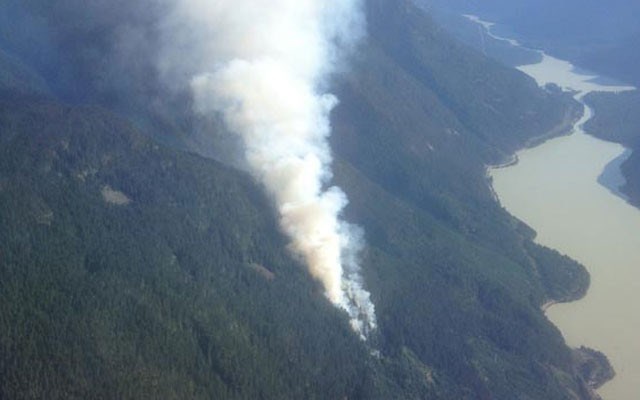 Report after report suggests that the biggest natural disaster risk for the Resort Municipality of Whistler is fire, and that risk is growing as trees mature, forests fill up with wood fuel and developments extend further into the forest interface. When the forest fire hazard rating hits extreme, as it did last week, it's a serious concern.

"Everybody needs to be very, very careful with what they're doing in the great outdoors," said fire chief Rob Whitton. "Enjoy the scenery, but be very cognizant of where you are."

In recent weeks Whistler Fire Rescue Service has attended seven brush fires in the past few weeks, most of them started by improperly disposed of smoking materials. As well, Whistler Fire Rescue Services is regularly called to attend backyard fires, which are now banned through the resort without a permit — and no permits will be given out with the fire hazard rated at extreme. Burning without a permit carries a $500 fine.

Whistler Fire Rescue Services is currently posting signs around the resort about fire risk, and this week posted signs at trailheads and at the entrance to every neighbourhood to warn people about the conditions.

"We're trying to get the word out with newspaper ads, ads on CTV, and we're also doing inspections around construction sites to make sure everybody is playing by the rules," said Whitton.

It's possible, he said, that Crown land could soon be closed to the public, something that happened during a severe drought in 2003.

"I'd hate to second guess the provincial government and we take our lead from them, but if this continues much (longer), given the state through the entire province, I'm leaning towards seeing (closures) sooner than later. The potential is there," said Whitton.

While there is a little rain forecast in the next few days it also comes with thundershowers and the risk of lightning strikes. The rain is unlikely to help much as it would take several days of rain and cooler temperatures to lower the fire hazard rating from "Extreme," and the hazard level would have to be rated "High" for three days for construction crews to resume limited work in the interface again.

In discussing the risks to Whistler, Whitton recently shared a report by the Western Silvicultural Contractors' Association that suggested that while 98 per cent of forest fires are extinguished the other two per cent are responsible for 80 to 90 per cent of reported wildfire financial losses.

As well, the fires themselves are becoming worse, and some can only be put out by wet weather and the arrival winter. Yet there has been an increase in demand for fire suppression at a time when suppression is becoming less effective.

Locally, there have only been a few wildfires of note in recent years, including a 2009 fire on Blackcomb that was started by lightning and covered roughly 90 hectares before it was put out.

However, it may only be a matter of time before the resort sees a major fire event.

A Whistler Blackcomb climate study suggests that average summer temperatures are up about two degrees Celsius over the past 35 years, which speeds up growth of vegetation and creates drier conditions.

As well, the area's extensive logging history has resulted in second growth forests that are incredibly dense, prompting the first tree thinning experiment in Lost Lake Park nine years ago. While a natural, mature forest will have around 300 to 400 trees per hectare, some areas of Whistler have 4,000 to 5,000 trees. One test area had 14,000 stunted and mostly dead trees where fire would spread quickly.

Tree-thinning projects that have been conducted around the resort since the pilot include an area of the Blackcomb Benchlands, additional areas in Lost Lake Park, the forest surrounding Emerald Estates (partially because of the pine beetle kill) and the Kadenwood Estates areas.

According to Whitton, thinning is a long-term project. "We've made an application this year to finish off the Benchlands area behind Horstman Estates, and trail crews have been doing some work around trails as part of their duties," he said. "Currently what we're doing, and what we've tried to do all along, is to get into the areas we can access quite easily.

"The reason for this is primarily funding. The UBCM (Union of BC Municipalities) will not pay for road building or access into areas that need to be treated and thinned, so we're working with them and the municipality to move into areas that we think we can get the best bang for the buck."

Grant funding for thinning comes from the province but is administered by a working group that includes the UBCM.

The UBCM is not the only agency promoting tree thinning. The Cheakamus Community Forest — a partnership between the Resort Municipality of Whistler and local First Nations — is also recommending more thinning in the region, with the added bonus that trees taken out of the forest can be counted towards the community forests annual allowable cut. Forest manager Peter Ackhurst also confirmed that loggers could harvest from residential areas if the circumstances are right.

Whitton pointed out that forest fires should occur regularly in places like Whistler, thinning forests and burning up all the dead wood piling up on the forest floor. However, with fire suppression and other human intervention — such as BC Hydro lines and roads creating fire breaks — the fuel has been building up.

The Whistler Museum is currently working on a project called "Whistler's Wildfire Past" with local biologists and loggers. It has found that "a great deal of our valley has burned within the last century alone." Evidence of fires can be found everywhere, including photographs of active fires taken by pioneer Myrtle Philip herself.

Allowing wildfires to run their natural course is one option for reducing fuel, but with 10,000 residents, a tourism industry valued at $1.3 billion and another $10 billion in real estate, that's not an option for the area — hence the need for continued thinning projects.

Where things get more difficult is in residential neighbourhoods and around private property. UBCM tree-thinning grants can't be used on private property and there is currently no bylaw on the books to force homeowners to remove potentially dangerous trees.

"What we've been doing is working a little bit with stratas in different areas to do an assessment of their properties and moving forward with some thinning and cleanup in those areas. And we've been going into neighbourhoods and trying to get FireSmart programs going," said Whitton.

He added that said some insurance agencies are mandating FireSmart, while there's also the potential for bylaws — something that has been discussed although nothing has been drafted at this point. Homeowners could also be forced to become FireSmart through the development application processes.

That leaves public education, and convincing people of the need to take the initiative to reduce fuel around their homes seriously. It's not happening quickly but, said Whitton, they're making ground in that area.

Steve Skakle of Windirm Tree Services said he hasn't received any calls this season from private property owners looking to remove trees that might be a potential fire hazard, but says there has been demand in the past.

"After every sizable fire event people get on it and they're motivated to get some tree work done around their homes, but so far this year none of my customers had fire management or fire safety as a priority," he said. "It goes in waves, and right now there haven't been any big fires. It's not on people's minds."