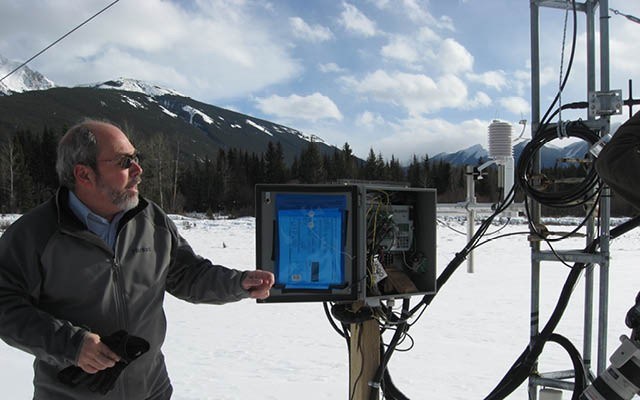 WATER WORKS Professor John Pomeroy explains the instrumentation at one of his hydrological research stations during a workshop in Kananaskis Country, Alta. PHOTO by lynn martel

It's a research scientist's biggest dream come true, and the roots of the program supported by the largest financial grant ever bestowed on a university-led water research group were established in Canmore, Alberta.

"It's a wonderful opportunity," said University of Saskatchewan professor John Pomeroy, of the announcement of $900 million in federal funding to be shared by 13 Canadian universities. As Canada Research Chair in Water Resources and Climate Change, and Director of the U of S's Centre for Hydrology, Pomeroy, who divides his time between Saskatoon and Canmore, will serve as Associate Director of the Global Water Futures: Solutions to Water Threats in an Era of Global Change (GWF) initiative. The seven-year program is the largest university-led water research program ever funded worldwide.

For its share, the U of S was awarded $77.8 million from the Canada First Research Excellence Fund to lead the GWF program in collaboration with three major partners — the University of Waterloo, Wilfrid Laurier University and McMaster University. Combined with funding from those partner universities and various industry groups, the program is supported by a total of $143 million.

"That allows us to bring a lot of good minds to Canada to work on solving big problems, both in our mountains here and in other mountain regions in the world," Pomeroy said.

In all, 18 universities across the country will collaborate on research projects focused on Canada's water resources and related issues and challenges, including those created as a result of climate change.

With the support of top technology including sensors, drones, nanosatellites, instrumented watersheds and computer models, the researchers aim to develop the tools and models to mitigate water disasters, protect the environment and take advantage of economic opportunities.

"Through better prediction, we will reduce the damages from extreme weather events, like floods, droughts and wildfires," Pomeroy said. "And we will unravel the social, health, environmental, political and economic implications of changes to our water."

For more than a decade, Pomeroy has been leading cutting-edge water and snowmelt research projects at various locations throughout the Canadian Rockies with colleagues based at the U of S Centre for Hydrology headquarters Kananaskis Country. As the GWF program progresses, Pomeroy said he expects ongoing research projects in the Rockies will be expanded. A new headquarters is being established in Canmore.

"It's very much a cross-Canada initiative, but it's focusing on cold regions water resources," Pomeroy said. "Mountain snow and ice is a big part of it, and looking at the impacts of climate change on that. Also, the future of flooding and the future of droughts, and what sorts of future snowpacks we'll have in the mountains. In particular we want to further develop the sensors and instruments that have been tested out in the mountains. A lot of this will be applied and tested in the Bow Valley, in the mountains. And we're tying in internationally to other mountain groups around the world."

Over time, he added, he and his colleagues plan to develop larger, improved research facilities, as well as bring in more researchers to the area, both permanent and visiting scientists.

The early ideas that have now formally developed into the GWF program were first typed out during a gathering of researchers and government representatives from various provinces, territories, the U.S. and other countries that took place in Canmore in 2008, and was organized by Pomeroy and Canmore resident Bob Sandford, EPCOR Chair for Water and Climate Security at the United Nations University Institute for Water, Environment and Health.

"Bob Sandford's work — when we worked out the game plan on how to advance things — was critical to moving all this forward," Pomeroy said.

"At the time we had these great ideas, but we didn't have any way to implement them. Now we have a way to do this. Here we are, eight years later, and we've got the biggest study in the world. That's far beyond what we thought was possible."

The GWF program will involve collaboration between 45 international research institutes, 39 industries, 388 university researchers from the US Rockies, South America's Andes, the Himalaya, the Tibetan Plateau, and Europe's Alps and Pyrenees, as well as 19 federal and provincial agencies, seven Indigenous communities and governments and 15 non-governmental agencies.

Researchers will also work with international organizations such as UNESCO, the World Climate Research Program and Future Earth to develop the tools and models to mitigate water disasters, protect the environment and take advantage of economic opportunities. And that list, Pomeroy said, will be added to in time.

"We expect to bring on about 750 people — graduate students and research scientists, technicians and others," Pomeroy said. "That's a massive increase in human capacity to solve these problems."

While he expects his work schedule to be busier than usual, Pomeroy said he looks forward to the challenges with enthusiasm.

"Oh, I'm pretty excited! For my scientific career, my scientific life, this is the biggest thing to have ever happened," he said.

"It has to be done, and this is an opportunity in a lifetime to make a big impact on how we're going to be dealing with climate change and how we will survive it. It's an honour that they chose us for funding and we intend to deliver everything we've promised, and more, by the end of the seven years."