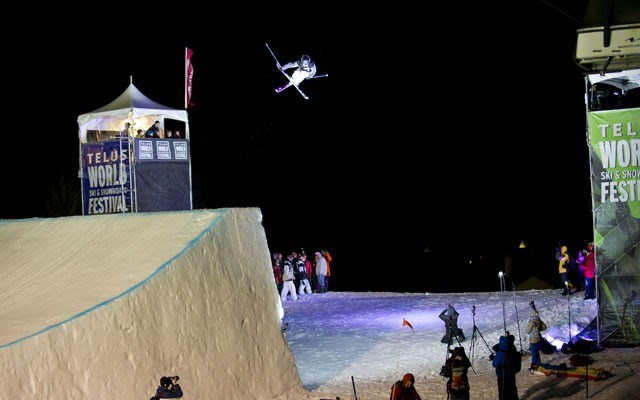 The cornerstone big-name ski events of the annual World Ski and Snowboard Festival will be saved from the chopping block this year thanks to a major cash injection from a local businessman.

Joey Gibbons, owner of several Whistler bars, has stepped up to the plate at the 11th hour with a cheque for $50,000. It's the biggest community investment outside of the local government, and the festival partners Whistler Blackcomb and Tourism Whistler.

That money is going towards the gravity-defying Big Air ski competition at the base of the mountains in Skier's Plaza, just steps away from Gibbons' flagship bar, The Longhorn Saloon & Grill.

His investment in Big Air allows WSSF organizers to put money into the skiing Slopestyle competition at the Blackcomb Terrain Park. It ensures the top calibre athletes, now synonymous with the end of season Whistler festival, will be part of the 19th annual event, taking place from April 11-20.

Gibbons said the decision was a "no brainer."

"Without this festival on this weekend, there would be nobody in Whistler and sometimes we forget that because we get used to it and we take it for granted," said Gibbons.

"But it's these type of events that have helped turn Whistler from a one-season town, to a two-season town to a four-season town."

While the investment directly benefits the Longhorn, Gibbons said it's about the spin-off benefits.

"It's in front of the Longhorn for an hour or two hours; it's not about that. It's about everything else that comes along with it."

The relief in WSSF producer and Watermark president Sue Eckersley's voice was palpable, and she called Gibbons's investment for the community "huge."

"Go buy a beer at the Longhorn!" she said, as a way of giving thanks.

The WSSF faces its second year without a title sponsor and, while Tourism Whistler and Whistler Blackcomb came through with funding this year, there was no sponsorship for the Slopestyle and the invitational Big Air.

The events are part of the Association of Freeskiing Professionals (AFP) World Championship that draw the best of the best.

"When we were looking at what the bottom line was and where we were financially there was something that had to give," said Eckersley.

"And being as we had no sponsorship up against the skiing events, that was the thing that was going to give, which was heart-breaking for us."

There was a chance both skiing events would go on hiatus this year due to the financial challenges. Organizers were unwilling to water down the quality of events just to hold them.

"We want to ensure it was a world-class calibre of event that we've grown in these past five years," said Eckersley. "If we couldn't do it to that level, it was better to put it on hiatus for a year."

Losing the skiing competition would have been a "significant business loss for us as the festival," said Eckersley.

Now, as the WSSF woos potential title sponsors at the upcoming festival, in time to support next year's event, they will see WSSF in all its glory.

"We're showing them the full breadth of what we have to offer as opposed to minus a big component," said Eckersley.

The complete athlete lists will be available April 1, but confirmed to date are: Alex Beaulieu Marchand, Joss Christensen, Vincent Gagnier and Nick Goepper.