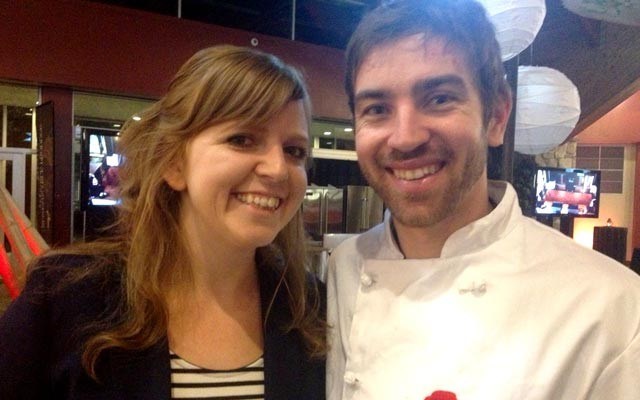 Kara and Travis McMaster order off a menu every day.

This week, the husband and wife team are having roast leg of lamb with roasted veggies in duck fat and stuffed pork tenderloin with rosemary lemon oil dipping sauce, as well as some bison chili, and creamy cauliflower soup. And don't forget about the chocolate pyramids.

That's just one of the perks of developing your own menu to suit your dietary needs and then selling it to everyone else.

"We never cook at home. Ever. All we do is eat our food," said Kara McMaster of their business Caveman Grocer. "It's very important to eat the food all the time, so we get the same perspective, as our customers so we're always trying to change it up."

Like so many good ideas, the idea for Caveman Grover was born of McMaster's frustration — frustration over not being able to find foods to meet her paleo diet needs, frustration over long shopping trips, researching every label and still not finding the right choices.

"Wouldn't it be great to go online and know that this company has already done the research for you?" thought McMaster.

And so began www.cavemangrocer.com. The company follows very strict paleo protocols — no gluten, no grain, no dairy, no soy, no sugar. All the beef is grass fed, the chicken and pork free-range. And there is a concerted effort to buy in B.C.

"So when someone comes to our site, they don't have to be doing that fact checking themselves," said McMaster.

"That was the vision that I had for the business and it just flourished from there."

McMaster swears by the diet, designed to eschew processed foods and emulate the diet of the Paleolithic era. She has been following it herself for years.

She has also been an avid crossfitter for many years, at one point doing CrossFit competitively and spending three to four hours in the gym each day.

While not all crossfitters follow the diet, there is a connection between the exercise regime and the Paleo movement.

Caveman Grocer, for example, is the official caterer for the regional CrossFit Games out of the Richmond Oval every year.

For McMaster, the proof was in the pudding. She'd struggled with her weight for years and after switching to a paleo diet, the weight dropped off, she had a lot of energy, she felt better.

And she decided to make it even simpler.

This wasn't really McMaster's vision for the future when she was studying international business with a focus on import and export at Centennial College in Toronto. She moved to Whistler and spent five years waitressing here before starting the company."I was a pizza, bread loving, pasta woman for sure," she laughed. "I always knew I was going to own my own business."

The Caveman Grocer is based out of the kitchen at Base 2.

The majority of their customers get their meals delivered in Vancouver.

Customers go online and check out the week's menu and order a la carte. Caveman Grocer delivers direct to your door.

They try to follow seasonal cooking, she said. The summer will feature protein with grilled veggies while the winter sees things like bison chili on the menu. The driving force in the kitchen is her husband Travis McMaster.

"You just overall feel better and you just wonder if you were living in a cold for the past how many years that your body just didn't adjust really all that well to," she said.

Caveman Grocer's future is looking busier and brighter with plans in the works to tackle the wholesale side of things — getting their meals into grocery stores.

In particular, they are looking at introducing their broths, such as their beef bone broth, to the marketplace.

"That's the next chapter for us," she said.

"A lot more people are asking for the paleo diet."

Check out the Caveman Grocer at www.cavemangrocer.com

(the "Pemby" comes from Pemberton zucchinis)

To make the zucchini "noodle" we use a spiralizer (this turns vegetables into noodles) but you can also use a mandolin or knife. If you are using a knife carefully cut the zucchini length ways, nice and thin to make your noodle.

Heat coconut oil in a wok and add the onions, cook until opaque and add the ginger and garlic. Once they have cooked off slightly add the lime juice, coconut vinegar, fish sauce and chilli garlic sauce (add as little or as much chilli as you like). Add the almond butter whilst continually stirring until you end up with a paste.

Add the zucchinis and mix through the almond butter paste continually to coat all the zucchinis. As the zucchini cooks down, it will release some of the water content and make the paste turn into a sauce. Cook for approximately eight minutes until the zucchinis are al dente.

Note: Chicken or Shrimp make a great accompaniment to this dish!