Mares eat oats — and so should we

Humble whole grains zip up your heath and extend your lifespan
Jan 14, 2015 5:00 PM By: Glenda Bartosh 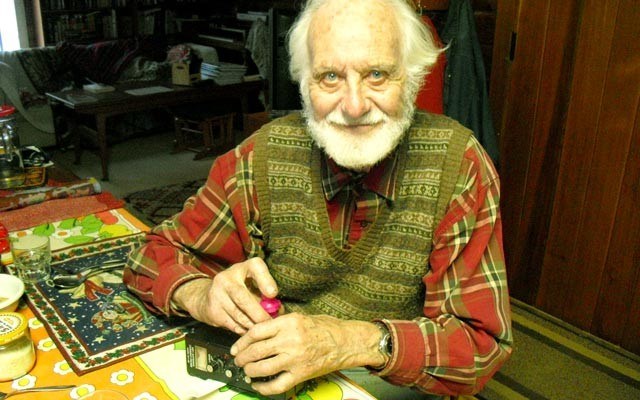 A GREAT PORRIDGE FAN: Pemberton's late Bob Eldridge, bright as ever at age 90. "He and mum were both special and remarkable," says daughter Anne (Annette) Eldridge. Photo submitted by Glenda Bartosh

My cardiologist couldn't get over it.

I'd had an MRI of my heart, looking for something else entirely. But as anyone of a certain age will tell you, an investigation of the old bod can turn up all kinds of things you never knew, and often don't want to. In this case, however, it was good news.

I can't believe it, she said repeatedly, explaining she doesn't see many MRIs like mine for people my age. Your heart is clear as a bell. No blockages. Nothing.

I blame it on the oatmeal porridge. So would more than a few other inveterate oatmeal eaters, like my granddad, who lived to the ripe old age of 91, and one of my favourite former food column correspondents, Pemberton's Bob Eldridge, who remained bright and spritely right to the end of his life last July, aged 93.

Now we oat eaters have been vindicated by a new Harvard University study getting lots of well-deserved attention. It shows that eating whole grains, like oatmeal, may well extend our lifespans.

Previous studies have proven the health benefits of eating whole grains like oats, brown rice, quinoa or barley. Containing high levels of nutrients such as zinc (your immunity system booster), iron, copper, manganese and thiamine, they can lower your blood pressure, increase your bone mineral density, reduce your risk for diabetes, increase the beneficial flora and fauna in your digestive system, and boost your level of antioxidants.

In this outstanding health crowd, oats stand out even more. They contain avenanthramides, which research shows may prevent fat from forming in your arteries, as well as beta-glucan, a fibre found only in oats which is known to lower cholesterol and can protect you from heart disease.

But the Harvard study, which was published in the Journal of the American Medical Association (JAMA) Internal Medicine and followed 100,000 people for more than 14 years, was the first to research whether whole grains can impact life span. The answer is, yes. Plus those who ate the most whole grains seemed to be protected from a number of illnesses, including heart disease.

A simple equation also arose from the study that might neatly align with some New Year's resolutions: For every ounce or 28 grams of whole grains people ate each day — remember, whole grains are things like brown rice or oats where the bran and germ are still in tact — the risk of death overall was reduced by five per cent, and the risk of death from heart disease by nine per cent. To compare, one Lundberg organic whole grain brown rice cake contains nearly 20 grams of whole grain rice.

At Alpine Café in Alpine Meadows, one of the best little eateries outside the village, chef and co-owner Martini Bart has helped ensure that whole grains are part of the menu. Enjoy their quinoa salads, multi-grain breads, or their homemade granola, replete with oats and lots of nuts, or have it on top of a yogurt parfait.

For its taste, texture and overall goodness, including its low price, Martini loves barley, a whole grain often overlooked in Canada but one huge in Switzerland, where he grew up. You'll find it in Alpine Café soups, and when he was a chef at Araxi, barley risotto was on the menu. (Try this mushroom barley risotto recipe, from www.epircurious.com.)

With its all-vegetarian menu, Raven's Nest up on Whistler Mountain is awash in healthy grains these days, while in the village you can get a bowl of piping hot oatmeal porridge or the popular lamb stew with barley and veggies at Dubh Linn Gate Pub. They've also got some nice whole-wheat pancakes for kids, but if you're a big kid, ask nicely and they'll make your pancakes whole wheat, too.

Even good ol' Southside Diner at Creekside has some healthy offerings in the whole grain zone — oat porridge for breakfast and their veggie supreme burgers made with rolled oats, fennel seeds and veggies.

If you want to break out of the usual grain box, hop on down to Olive's Community Market in Function Junction and try some under-the-radar whole grains. Produce manager Alex Powell says one of the most popular ones on the shelves is also used in an Italian-style salad in the deli — Bob's Red Mill farro, an ancient grain from Italy that fuelled the Roman legions.

They've also got Bob's Red Mill amaranth, another ancient grain, one used by the Aztecs. Alex likes to add it to one of her many porridge mixtures made from six to 13 varieties of grain. (Hint from Alex: for hard grains, or if you have trouble digesting them, try soaking them overnight.)

That's a tip, too, from that other amazing Bob, Pembie's late Bob Eldridge, who ate whole grain porridge every day, except Sundays, when he made pancakes — a combo that no doubt kept him so perky and bright, as his daughter Anne reports. She now tends the 40-year-old Eldridge homestead in Pemberton Valley, in between looking after her 50-acre ecological reserve in Bahia, Brazil.

The default setting for Bob's porridge was oatmeal, simmered from a cold start to keep it nice and creamy, though he liked to mix in different grains as well as some interesting "extras."

Fancy molasses; nuts and dried fruit; maybe a tablespoon of Ovaltine sprinkled on top right before eating. And, in later years, chocolate chips with a high cocoa content. Or coconut, a Bahian influence from his daughter, granddaughter Taomi, and great-grandkids, Gabriel and Bernardo, who liked to come up to snowboard and eat porridge with their vovo (Brazilian for "granddad"), without chocolate chips.

Coronary heart disease is still the No. 1 killer in Canada. But you can reduce your risk just with one little serving of oatmeal porridge a day. And don't think it's just for breakfast.

At our house porridge comes with Parmesan cheese, or a dollop of soy sauce, chopped green onions and sesame seeds on top. Not a bad bedtime snack either, since some find oatmeal porridge has a calming effect.

But I think Bob had the better idea with his flair for Ovaltine and chocolate chips. What the heck! You only live once, and with any luck and some good ol' grains, it will be a long one.

Glenda Bartosh is an award-winning journalist who's now going to eat more porridge than ever.