Red is the colour of my own true love 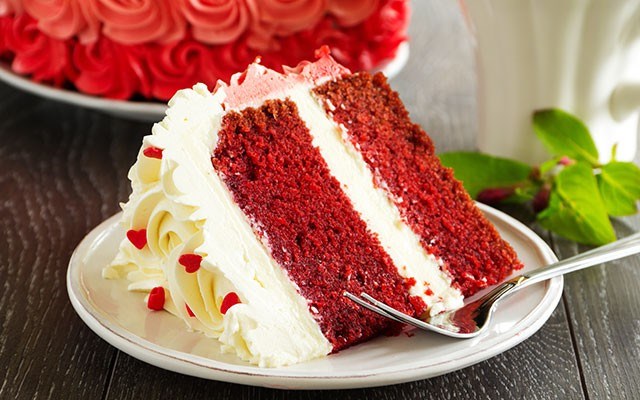 QUEEN OF HEARTS Red velvet cake takes the prize for Valentine's Day. It's worth making for the icing alone. <a href="http://shutterstock.com">shutterstock.com</a>

Red is a powerful signifier, period. Red for anger. Red for fire and violence, even death — at least to Westerners. (Red in Chinese culture, for instance, also symbolizes fire, but in this context it means good fortune, happiness, joy. That's why Chinese give red envelopes as monetary gifts and Chinese New Year is festooned with red.)

Red is the symbolic colour of Mars, bound up with the burning dualities of war and demons. It's the attention-grabber for stop signs and danger, and one of the big three power colours for advertising. (The others are blue and yellow, at least so said a Texan marketing expert who'd flown to Chulalongkorn University in Bangkok, where I was studying at the time, to teach Thai people how to market "right.")

Johannes Itten — the Swiss-born master of colour whose classic, The Elements of Color, is the foundation for colour courses at many an art school, including my alma mater, Emily Carr University of Art and Design — describes red as having an "irresistible radiancy," one that is "not easily eclipsed and yet is extraordinarily flexible."

Blue-red purple, for instance, connotes spiritual love. The French painter and manuscript illuminator, Enguerrand Charonton (also spelled Quarton), portrayed the Father and the Son in crimson robes, while Mary gets more of a blue-red one.

Contrast that to red-orange, Itten says, which is dense and opaque, and where the warmness of red is intensified to fiery strength"... symbolically comparable to vitalized earth. Red-orange light promotes vegetable growth and organic function."

As Valentine's Day rolls around, this potent colour gets ever more loaded: Red is a big signifier of passion. Who hasn't called someone a red-hot lover, or hunted down a fresh bouquet of red, red roses to bequeath to the same?

"(The colour) is, to a large extent, like very dark beef, so it's sort of a reddy-brown colour because the heart is, basically, a big muscle," says my scientifically qualified neighbour who is a pathologist, physician and researcher. She's also performed autopsies during the course of surgical histology.

"It's probably a little more brown than red," she adds.

"If you want to get a really good idea of what it looks like, I would go to a butcher who sells (beef) hearts, so it probably would be an Italian butcher because they tend to have those kinds of things."

So apart from blood in the blood vessels, you won't see a speck of that bright, typical Valentine's red anywhere near your true love's, or anyone else's, heart. That said, don't give up on red for the day. This powerful colour can lead you to many avenues that aren't lined with predictable chocolate, red wine and strawberries flown thousands of kilometres for the occasion.

Deeply pigmented foods are, for the most part, highly nutritional and tasty. So branch out into all things red that will add some spice to the festivities. Deep red peppers in their myriad forms — from long chili reds to sweet red bell peppers — can be quickly grilled and served with a tasty olive oil dressing. Dark-green Swiss chard with ruby red stalks makes a perfect counterpoint.

One of my favourite red-outs off the beaten trail is jamaica tea (pronounced ha-MY-kah), so popular in Latin America, that's made from red hibiscus flowers. South China Seas Trading at Granville Island Market sells an especially high grade of it, but you can usually find it at any Latin American market.

Serve it iced for a deliciously intense, zingy ruby red drink that kids love as much as adults. But don't be surprised when it shows up next day. There's a lot of red pigment in those hibiscus petals, if you get my drift.

In fact, Nude Tin Can Gallery owner and artist, Samantha De Barnard, took full advantage of this "next day" phenomenon for her entry in the Don't Forget to Flush art competition her U.K. gallery ran last year for World Toilet Day. Her image, "Red Velvet Cake," is a reflection of just that.

Double duty or no, red velvet cake is enjoying a popular resurgence. Dubbed by The New York Times as a "classic not a gimmick," it makes for a potent Valentine's Day offering.

Velvet cakes were popular in the 1800s when agents like cocoa, which red velvets contain a lot of, were used to soften the protein in flour. Red velvet cake likely appeared around the 1930s when red devil's food cakes were also popular.

Some say it first appeared in the Southern States, some say New York, but wherever it was, an aristocratic air was attached to it. In Toronto of yore, Eaton's served red velvet cake, which Lady Eaton was supposedly fond of.

Red velvet cake was popular in my hometown of Edmonton in the 1950s. Some of the neighbourhood ladies were prone to tsk-ing all the artificial red dye back then, but things and dyes have changed.

Go ahead — give it a whirl. You can Google any number of red velvet cake recipes, even ones using beet dye instead of the artificial stuff. It's worth making for the icing alone.

Glenda Bartosh is an award-winning journalist who invites you over for a glass of jamaica tea and a slice of cake.