Howlin’ Wolf would probably tell off Ash too

Australia’s Ash Grunwald was not only inspired by blues greats, but kept stage company with them as well
Feb 29, 2008 7:16 AM By: Nicole Fitzgerald 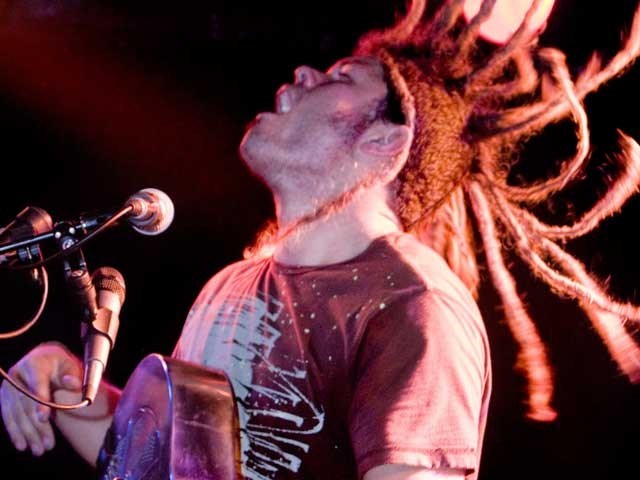 Australia’s Ash Grunwald delivers his award-winning groovy spin on delta and 1970s electric blues on Friday, Mar. 7 at the Garibaldi Lift Company (GLC). The fearless innovator is a one-man show of voice, guitar and percussion who has earned three Australian Recording Industry Award (ARIA) nominations for Best Blues and Roots Album, two Australian Blues Awards for Male Album of the Year and Best New Talent, and three Victoria Blues Awards for Emerging Talent, Album of the Year and Male Vocalist of the Year. His 2007 release, Give Signs , also won the Best Independent Blues and Roots Album Award from the Australian Independent Record Label’s Association.

No matter how many awards sit in his hometown of Sydney, one of the greatest highlights of this young bluesman’s career was opening for the likes of legends such as Bo Diddley and James Brown. The Pique Newsmagazine ventured over cyberspace to the land down under to open up a discussion on the Godfather of Soul.

Pique: James Brown was one of your early influences as a kid growing up. What was it like performing with him in 2006 in Tasmania? What did you admire about his music?

Ash Grunwald: It was amazing to support James Brown! He was an institution. So much feel and so much groove. I honestly never imagined that I'd ever see him live in concert, let alone play with him! I can't imagine what he would have been like in the 50s, he was still a great dancer at the gig and at the time he was getting around in a wheelchair apart from when he was on stage. I used to sing along to his stuff and I admire that funk groove.

Pique: Your music has been praised as reinventing delta blues with modern grooves. How far do you stray from the traditional? What do you think Howlin' Wolf would have to say about your music?

AG: I try to keep the feel, soulfulness of delta blues in my vocals and guitar. The rest is from more modern influences I guess. Sometimes the live show sounds a little like a dance party. One of my friends described it as “drum’n’blues”! I love Howlin’ Wolf so much; he's pretty much my hero. He took a bit of the old and a bit of the new without changing the deep roots in his music. I love that. I did a gig with Hubert Sumlin who was the Wolf's guitarist and right hand man for most of his career and he said that Wolf would have dug me, which is pretty much the biggest thing anyone could ever tell me. As for what I really think the Wolf would say? Hmmm. Well he told Hendrix off for using a wah wah (pedal) and he was a hell of a lot better than me so I dunno.

Pique: The title of one of your tracks, Stop Taking Life So Serious, is that something you need to remind yourself as well?

AG: I think you need balance and consistency to achieve anything in life. That's why you’re always best off following your passions because then it's no effort to apply yourself to what you're doing. The best thing to do as a muso (musician) is to work as hard as you can whilst also realising that at the end of the day it's only a game anyway. It's just some stuff that you did with your life. It's no more or less valid than anything else  I wrote the song to myself as a reminder.

Pique: Is this your first time in North America?

AG: I played once in B.C. at the Salmon Arm festival. I loved it and I loved Canada in general. At the time I thought I'd come back every year but that was six years ago. I plan to rectify this problem and never miss a year again. I also went to Memphis to compete in the blues performer of the year competition, which was fun. I also went to the hallowed crossroads in Clarksdale, Mississippi.

Pique: Tell me about your new live album coming out.

AG: The new live one was recorded at a gig in Sydney. It came up pretty well and I got one of my heroes Chris Wilson to play harmonica and sing a few tunes on the night. We're hoping to get an overseas release for it but at the moment it's just available from the website. In Oz, everything is being geared toward the next studio album.

Pique: Any new projects in the works?

Grunwald: Yep, the new studio album should be ready by the middle of the year. I'm getting Pip Norman who is from the Aussie hip hop scene to produce it. It's pretty beat-laden modern sounding stuff, mainly mixed old school blues. I've got a few more folk blues stories on there as well so it's a bit of a mixed bag. I'd love to end up where Tom Waits is at where you have a collection of really diverse songs but they all sound like you. That's when you've really found your own sound.