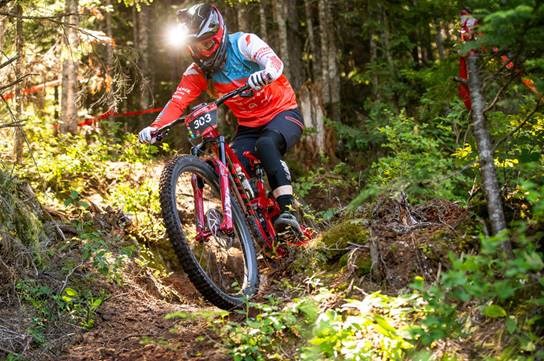 Miranda Miller is one of 25 B.C.-based athletes competing in the CLIF Crankworx Summer Series.Fraser Britton

In the face of the COVID-19 pandemic, Crankworx has been forced to pivot on the fly.

After successfully running its stop in Rotorua, New Zealand in early March, the world tour postponed its Innsbruck, Austria festival from June to late September and ultimately cancelled the cornerstone Whistler event for August.

But there was plenty of work going on behind the scenes.

Good feels racing against the clock again! Did some things fast, lots of things smooth and a couple real bone head moves. So, all is normal. ⁣ ⁣ Happy to take 3rd place in the first Enduro and stoked to see my friend Brownr on the top step! ⁣ ⁣ Now I’m off to learn how to dual slalom. I hope I don’t fall over in the gate. ⁣ ⁣ : @clinttrahan @crankworx⁣ #KonaBikes #SRAM #RockShox #Ride100Percent #GetOneUp #BrandoftheBrave⁣ #ChrisKingBuzz #MaxxisBike ⁣#iRideEnve #pedaltothemetal #rideDEITY #ODIgrips #MaximaRacingOils #mtb #longlivechainsaw ⁣

In separate announcements coming out on Monday, July 27, Crankworx announced that it was running a Summer Series across the province with stops at Sun Peaks, Kicking Horse and Silver Star resorts, commencing immediately and running until Aug. 14.

"It's a dream come true, to be honest," Kinnaird said from the site of the first Summer Series races at Silver Star. "I'm really thankful for the opportunity, thankful for the support of Whistler Blackcomb in this. I've got an amazing team that is still going to work with Crankworx and an amazing business partner with TJ Walker of Boombox."

Kinnaird expects a smooth transition of ownership, especially in terms of what longtime attendees will experience.

When asked for more detail, Kinnaird said: "More of everything, given time. That's the hope."

Though Vail Resorts is stepping out of its ownership role, it will still play a role in producing the Whistler element of the festival.

Kinnaird said the team has been developing the series since early April, after realizing the opportunities that British Columbia presents.

After getting sponsors on board, things seemed to gain some propulsion.

"We've been jokingly saying that we were building the plane as we were trying to take off right until the very last second," he said.

In terms of coming down to the last second, putting out the announcement the day before competition officially started was also by design, Kinnaird said, to discourage spectators from coming up to the TV-only events.

"We kept things on the DL as long as we could," he said. "Normally, I would say, 'Everyone come to Crankworx,' but with this, we are trying to just tell people to watch from home.

"Enjoy it and let the athletes compete safely so we can make this series happen."

"We have groups in teams, and there are little pods within the teams," he said.

Kinnaird added that all races are taking place during the week at times where the host resorts are less busy. As well, on the competitor side, mountain biking is a sport that can be spaced out without significant changes.

"We're in a strange time but it's a unique opportunity for the whole province to be showcased as the best mountain biking destination in the world, so that when things get back to more normal times, people will want to come back here to B.C., to Whistler, to all these amazing destinations and bring their bikes with them," he said.

For more information on the Summer Series, or to tune in, visit crankworx.com/festival/crankworx-summer-series.

As for the world tour, Kinnaird added that the Innsbruck stop on the circuit, slated for Sept. 30 to Oct. 4, is still looking good at this point.

"There will be more info there when we have it, but we're still definitely hoping for an exciting event over in Austria," he said.

We will bring you the results at the end of each week. Stay tuned.