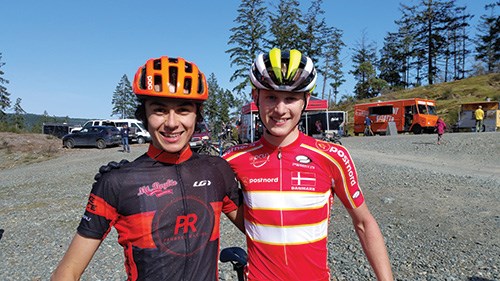 One key moment during the U.S. Cup in Fontana City stands out in the mind of local coach Mike Charuk.

Squamish rider Holden Jones was on the final lap to win the junior men’s cross-country mountain biking division. Towards the end of that run, all the other competitors in the race had lagged off in the distance, save for one — a U.S. champion.

The American was hot on Jones’ tail, and the two riders were practically neck-to-neck.

But then, an opportunity arose.

“He unclipped, had a little bobble, and that’s all Holden needed,” said Charuk.

Indeed, Jones took advantage of that moment and beat out his competitor by four seconds.

“Every time the USA guy tried to attack him, come around him, Holden [was] just calm, cool and collected,” said Charuk. “[He] just put the gas on enough just to keep him behind him.”

It was an example of the kind of riding that allowed Jones and the rest of Team Squamish to obtain multiple victories over the course of two competitions.

Jones took the win in his division at Fontana and at the Bear Mountain Canada Cup, which was shortly before the American race.

It’s a showing that’s made all the more significant given that the level of competition at these races has been increasing over the years.

Charuk said that these events previously attracted mainly North American riders. More recently, however, they’ve been garnering competitors from all over the world.

“The competition is the highest junior competition I believe that I’ve seen since I’ve been coaching five [to] six years,” he said.

Jones’ peers in Team Squamish were able to rack up several victories at Bear Mountain as well.

Jones’ victories are also of particular importance because these two wins, which are events sanctioned by Union Cycliste Internationale, will help him accumulate points.

At the end of the season, these points will determine where riders start during the world championships.

Getting off to a strong start this season could help Jones further down the road. Last year, he took bronze in the UCI World Cross Country Mountain Bike Championships.

In the meantime, Charuk said that he’s helping Jones identify areas in his riding that need a little more work.

Jones will be refining his time trial performances, Charuk said.