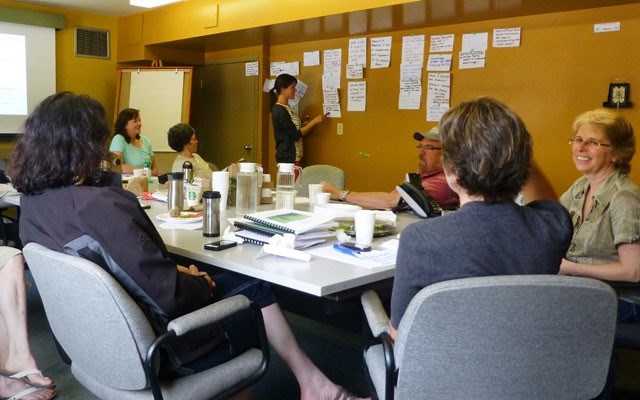 Though the summer of 2014 was not kind to Whistler's bear population — 11 local bears were killed as a result of conflict with humans — there's a lot that the resort is doing well, according to some of the top minds in bear research.

"From my perspective, Whistler did an excellent job at controlling its non-natural attractants and with its education campaigns," said Lana Ciarniello, co-chair of the International Union of Conservation for Nature and head of the International Human-Bear Conflicts Committee.

"Now we're just looking a little bit more at how we can still reduce the number of bears being killed and increase human safety."

Ciarniello was one of nine participants in a brainstorming session last week designed to help Whistler take the next step in reducing bear deaths in the resort.

The workshop was organized by the Get Bear Smart Society (GBS) and sponsored by Bear Scare Ltd., Crepe Montagne, Milestones, Creekbread, Starbucks and Samurai Sushi.

"This has been in the plans for awhile," said Sylvia Dolson, executive director of Whistler's GBS.

The workshop started with Dolson showing the attendees around Whistler so they could get a better sense of the situation, she said.

"Many of the members who have worked in other communities were incredibly impressed with what we've accomplished so far, so that was great and reassuring," she said.

"You forget to celebrate your successes sometimes."

But despite the positives, Whistler is still dealing with some "huge holes" in terms of bear conflicts, Dolson said.

"That's why we have everybody together — to figure out what the heck are we missing here, because bears are still getting into trouble," she said.

"We've implemented numerous programs and we've had education here for a couple of decades, we have great bylaws, our conservation officers are trained in non-lethal tactics, we have a complete bear-proof waste-management system, what's going on here? Where are we missing the boat on this one?"

At the end of the brainstorming sessions, the answer wasn't immediately clear — Dolson said more conflict data is needed to make sound decisions — but there are some things that can be addressed in the short-term, like the garbage needs of Whistler's transient population.

"There's some people who may not have a car and it might be an issue for them to bring the trash to the collection centre. Those are some issues that we talked about that we might be able to resolve immediately," said Sharon Baruch-Mordo, a bear researcher with Colorado State University.

"We also talked about needing to do some groundwork to better understand what are the other sources of conflicts, and once we do that, then how do we engage the community, the municipality, the province and federal folks to actually... analyze the data that we have at hand and come up with some solutions for the conflicts.

"I think the people here are really committed to that and they'll pursue that."

"It was very beneficial, because I think we all bring different perspectives to the table, and I think it was a very fruitful discussion," Baruch-Mordo said.

"You guys are very close, and I think if we can target a little bit the people aspect of the human bear conflict in terms of managing the attractants... I think it could be a really great situation here."