Final thoughts from the campaign trail 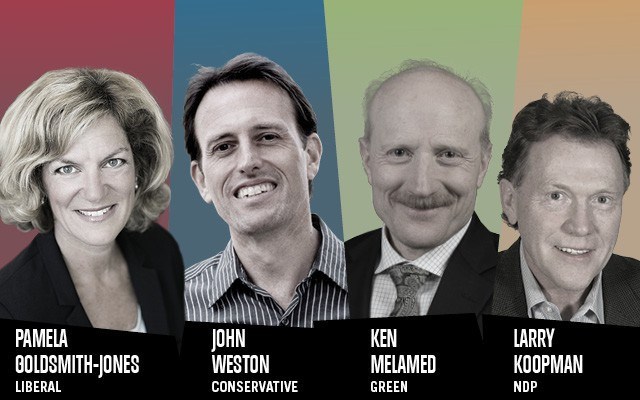 DOWN TO THE WIRE A tight election campaign in the Sea to Sky will be decided when Canadians head to the polls this Monday, Oct. 19. photos submitted

As voters prepare to head to the polls on Oct. 19, Conservative MP John Weston has narrowed his focus.

Flyers and social media posts targeting Liberal candidate Pam Goldsmith-Jones have popped up around the riding in recent weeks.

While Goldsmith-Jones touts six straight balanced budgets as part of her record as mayor of West Vancouver, Weston's campaign asserts that the Liberal candidate overspent in terms of operating expenses.

"If you look only at administrative costs, which is a subset of the operating costs, those grew over six years by a whopping 165 per cent... this is during a period when the population did not grow and inflation increased only 10 per cent during that six year period," Weston said.

"So the way she covered her deficit was by raising utility rates — 65 per cent for water and 85 for sewage. Those are indirect costs, and that's a great illustration of the Liberal approach to fiscal management."

Weston's singling-out of Goldsmith-Jones is coming at a time when her campaign has momentum, she said.

"We received endorsements from Nancy Wilhelm-Morden, the mayor of Whistler, and also the Alliance 4 Democracy and Sunshine Coast Senior Citizens grassroots group uniting around progressive change," she said.

"At the national level the Toronto Star and La Presse have endorsed Justin Trudeau, so we see the country coming together for positive change and momentum is picking up."

While many Whistler voters took advantage of advance polling over the Thanksgiving long weekend, many more will make their decision this Monday, Oct. 19.

Even after 10-plus weeks of campaigning, Green Party candidate Ken Melamed said he wasn't yet feeling the fatigue of the campaign trail.

"I actually feel tremendously strong, confident and really energized by the campaign," he said.

"We've been building, rather slowly at first, but it's at a crescendo pitch right now, and we can see election day not far off."

After countless campaign stops and more than a dozen all-candidates debates, Melamed said he felt voters in the riding are connecting with the Green message.

"I've just really been pleased and so appreciative of the feedback that I've been getting from the people who have come to the debates," he said. "They recognize that this riding has a strong candidate, and what's happening is Green voters are rising, are coming forward with the strong belief that they can elect their candidate this time. This riding is poised to make history and it's their commitment and their belief in the hope and promise of it that is helping me along."

The Greens are the only party who will stand up to Woodfibre LNG, Kinder Morgan and allow its MPs to voice their own opinions, Melamed said.

"We want people to believe that if they vote with their hearts and they vote according to their values, their best outcome will be electing more Greens to parliament," he said.

"We will stand for them, we will represent them before we represent the party, and we will not just change government, but change the way government works."

As the election campaign winds down, NDP candidate Larry Koopman gave credit to his opponents.

"No surprise, we have a difference of opinions, different policies and different values, but the great thing is that we can still agree on many things," Koopman said. "I think what I've learned is my colleagues are all worthy colleagues, and they care about this country, but how we want to propose policy to address the issues, well that's the difference."

The Sea to Sky riding is not a small one — only made bigger when you spend 10 weeks traversing every inch of it — but Koopman said campaigning has been enlightening.

"It's been really positive, especially at the door," he said.

"The response in Whistler has been very positive. There is an undecided element, but you know, that's my job when I go to the door is to put forth our policy and our platform and give them a good reason to vote for me."

Koopman encouraged everyone to make an informed decision while casting their ballot.

"I think if people really looked they would see that the NDP is proposing good policy for the nation and for families, with our $15 a day national childcare program and our pharmacare program," he said.

Goldsmith-Jones said that with less than a week until election day, her team of volunteers were as ready and focused as ever.

"We've run a positive campaign. I'm not interested in the politics of fear or division, and we have stuck with that every step of the way," she said.

"I'd like to thank the volunteers that have worked tirelessly for months, and I would like to ask for the support of the community for positive change here and in Canada."

Weston summed up what he and the Conservatives are offering for voters in five points — a high quality of life, sound fiscal management, high accountability, low taxes and a commitment to Whistler.

He asked that voters look at who will best represent their interests before casting their vote.

"People might be tempted to vote with their emotions as opposed to rational thinking, and to worry about what other voters in the country may do or who the leader may be," he said.

"I would say focus on who would be the best representative, who knows the riding, who has produced fruitful results for Whistler and the rest of the riding, and not make it too complicated."