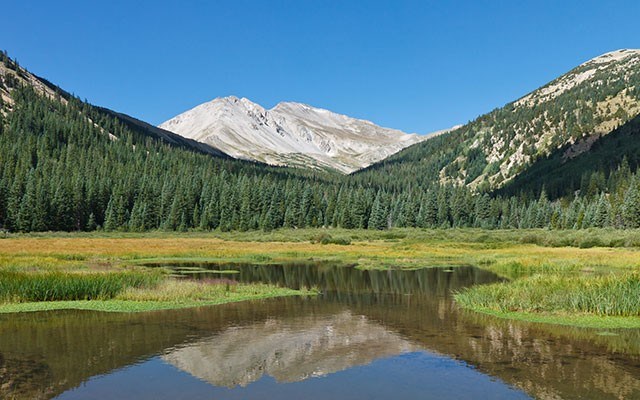 LIGHTNING STRIKES A newlywed couple climbing Colorado's Mount Yale, pictured, were struck by lightning after a sudden change in weather pattern. The bride was likely killed instantly, while the husband was injured, but survived. Photo by Patrick Poendl / Shutterstock

The Denver Post reported that Kathleen Bartlett and Ryan Pocius had been married less than a week when they were hiking just above treeline on 5,328-metre Mount Yale. The Chaffee County coroner said the bride probably died immediately. Pocius was injured but survived.

For all the people who spend time above treeline, not many people get hit. Still, it's a very real threat. The usual rule of thumb is to rise early, make the summit by noon and then hasten down to the relative safety of trees.

But sometimes lightning strikes early. Fifteen people were struck in late June while hiking on Mt. Bierstadt, a 4,267-metre peak located 64 kilometres west of Denver. It was just before noon. None were killed, although nine later sought medical attention. A German Shepherd dog named Rambo didn't fare as well. It was killed.

All accounts of the day agree about the sudden turn of weather. One person reported perfect weather until about three minutes before the strike. A man said his hiking poles were making a low hum before he was hit. He reported feeling intense pain before waking up face down on the ground, his legs and arms paralyzed. He soon regained their use.

There is no perfect correlation with high ground and lightning. Florida, with a high point of just 105 metres above sea level, leads the United States in fatalities. Colorado is No. 3 in lightning fatalities but some of the highest areas of Colorado, such as the Elk Range between Aspen and Crested Butte, don't necessarily get the most strikes, according to a report by Stephen Hodanish and Paul Wolyn called Lightning Climatology for the State of Colorado.

Wyoming leads the nation in a different if still dubious category: the number of deaths per million residents. Colorado is No. 2. In this category, Arizona, Montana, and Utah also rank in the Top 10, according to the National Atmospheric and Oceanic Administration.

By any measure, the West Coast is relatively immune to lightning threats. While Colorado had 17 fatalities between 2005 and 2014, Washington State had none and Oregon just one.

Steve Clark is president of a group called the Lightning Data Center. It meets monthly in metropolitan Denver to talk about lightning. He believes the relative lack of lightning on the West Coast is explained by the more consistent temperatures and greater moisture.

Storms in the Rocky Mountains, in contrast, tend to be drier. In winter, that produces fluffier snow. That drier air combined with greater temperature differences produces more lightning.

Of every 10 people struck by lightning, only one is killed, he says. But about a third of survivors end up with long-term neurological problems, everything from motor coordination to speech to altered moods and appetite. "They can be singular or in combination," he says.

Gas and not lightning maybe cause of deaths

ASPEN, Colo. — Jeffrey Beard was backpacking with three of his children near the Maroon Bells, a pair of 4,267-metre peaks. The first report was that Beard and his son, Cameron Beard, 14, of Colorado Springs, had been killed in a lightning strike.

But Pitkin County Sheriff Joe DiSalvo said that may have been a premature guess. Toxicology tests have been ordered but were not immediately available.

The Durango Telegraph reports that the ski area hopes to get the U.S. government to allow it to swap some of its steep and above-treeline terrain in its existing permit for more moderate, below-treeline land. Reduced avalanche risk is also a consideration.

"Having some lower-elevation, lower-hazard and less wind-exposed slopes is something Silverton Guides needs," co-owner Aaron Brill told the Telegraph.

The Telegraph notes this swap-out may not be favored by all. Some of the proposed commercial areas would co-opt favorite haunts of local backcountry skiers.