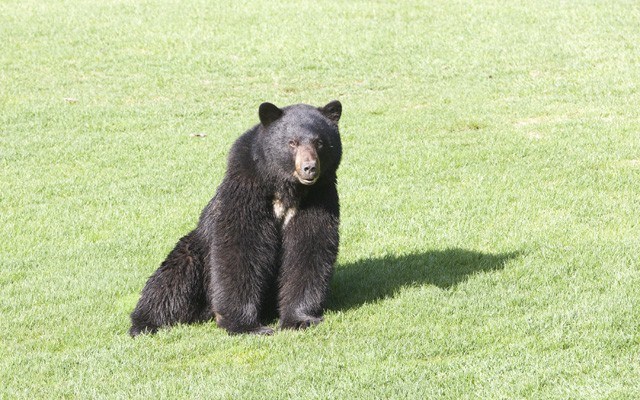 The first bear I saw this spring was Slumber — the male bear I have known the longest over the 23 years (1994-2016) I have been studying bruins.

At a minimum age of 19 years, Slumber's coat looks good, indicating no significant stress during hibernation, but he is slightly smaller in muscle mass (head and shoulders) resulting from old age and last year's poor berry crop.

Over the last 16 spring seasons as an adult he is never really happy to see me, routinely fleeing at once. I think what's kept Slumber on the "wild side" is his annual wariness of people, a behaviour he's maintained his whole life, which is rare for male bears in Whistler.

He slumps down on his haunches almost in fatigue but, head up and shoulders square to me alert... his lips slightly open and respiration increasing — telltale signs of becoming stressed. In less than 30 seconds he lopes off into the thicker forest.

Every season he always displays his initial wariness and I think that's what differentiates him from other habituated bears. Most bears in Whistler have to be, at a certain level, habituated in order to live here. And, like other bears, Slumber will become accustomed to the "Whistler world" as the weeks go by, but he does go his own way when "pushed" by human activity. This is what sets him apart from many bears — others have more or less maintained a habituation that resulted in their death from garbage/human conflicts.

I've known him his whole adult life and I wonder if he knows me? I don't ever pretend to think I have some weird connection with bears but, judging by certain behaviours he displays each year, I've always believed he recognizes me, using scent, body language, and events that occur in similar times and spaces.

For most bears, habituation is not constant, but stimuli (food reward or the potential for that) and circumstance (poor berry crop leading to easy access to human food and non-aggressive human reaction) in, or close to, a bear's familiar environment can change bear activity resulting in a more forced constant habituation.

Think of where you live — among the nice trees, high rock outcrops or along a forested creek — bears have been using these historic habitats for years. Young bears especially, pushed after two years from their mom's breeding range, will be forced to get used to you living there, especially as the area still retains much of its natural landscape.

This is why conflicts usually occur throughout the bears new culturally adapted landscape. Bears are good at realizing the potential for these new habitats — clover and dandelions and maybe high-calorie human foods.

Many young male bears, because they can't grow up in mom's breeding range and are trying to avoid larger males, begin to maintain a frequent habituation to human-related food because it's easier to compete with humans than other bears. That's why many of these young males, immediately or after a few years of being exposed to this increasing habituation, fall victim to it and are killed in Whistler because of the conflicts it causes.

Slumber was fortunate to survive because when he was younger Whistler did have a higher bear population with more larger males in the valley, which possibly pushed him in the right direction. And also, I'm sure of the fact that he was born to a mother that resided near the old landfill, which he naturally would have avoided leaving her breeding range. He basically grew up using the north end of Whistler/Green Lake (sometimes Wedge) to Blackcomb Mountain and was actually named (very appropriately) by a student during a Grade 5 field trip on Blackcomb over a decade ago.

Really though, after 30 years of studying black bears I cannot give you a scientific explanation as to why some bears survive and some don't... other than to say that the result of competition and circumstance shapes differences in personality, strategy and eventually, bear survival.

Slumber always has shown a difference in personality and strategy from the norm of other males... I guess sometimes it pays to be different.

Males are the first to emerge from winter denning because they have no cubs, are larger and need to begin feeding earlier, and, most importantly, they likely need to begin marking their range and presence to secure dominance for mating beginning in late May.

I have seen male bears sleeping at daybeds made in dense forests (so the canopy intercepts the weather) in a metre of snow while waiting for green-up on a golf course during a colder-than-usual mid-April.

Internal body clocks and body condition (from the previous fall) likely stimulate waking, beginning in the last week of March.

Many times I visited a den site in late March to mid-April only to find a tunnel one to four metres long exiting the den either up alongside the dead tree or up from the base of a large boulder.

Over Slumber's life, first-seen dates have fallen within the last three weeks of April similar to most adult males. The only significant difference was with males using the landfill in the early- to mid-1990s when first-seen dates began a month early in the first week of March.

This annual early-spring availability of high-calorie, edible human food refuse simply taught bears to emerge earlier knowing they could replenish lost hibernation reserves faster. On their way to the dump, bears strip catkins (pussy willows) from willow shrubs and rest at swamps to break the ice and pull up the first emerging shoots of skunk cabbage. This activity always reminded me of polar bears breaking the ice for seal hunting.

So far, eight black bears (six males, one female and one immature) are active from the south end of Whistler to Green Lake.

Bears are grazing green-up along golf courses, roads, trails and backyards. Keep your residence area clean to give bears a healthy start this year.