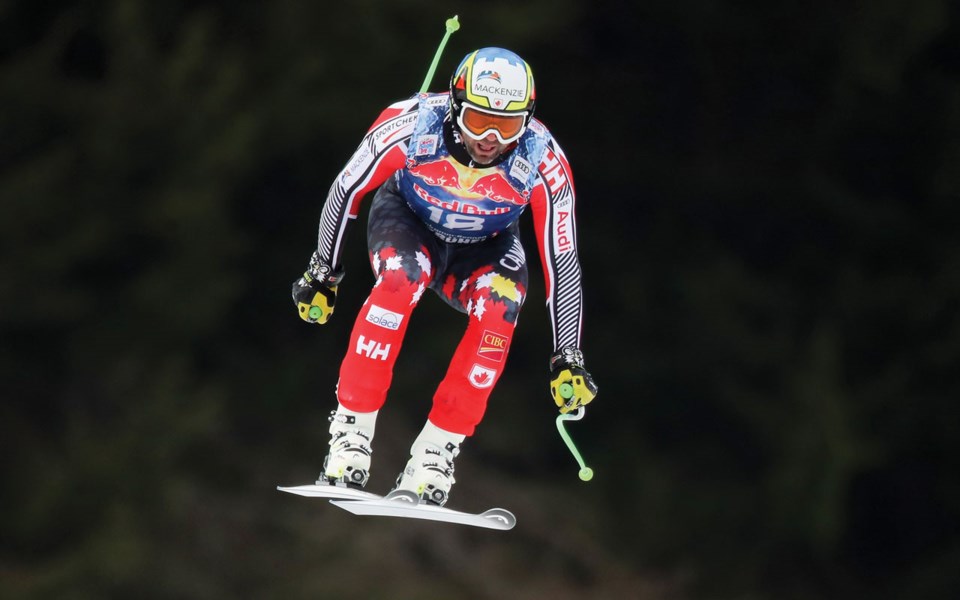 After a devastating crash during training in 2018, Manny Osborne-Paradis was determined to race on the FIS World Cup circuit again, even after having 13 screws placed in his rebuilt left leg.

From a physical standpoint, the Whistler Mountain Ski Club alum was well on track to achieve that goal in 2020-21, but even after putting in two years of hard rehabilitation, Osborne-Paradis opted to retire, making his decision official with an announcement on Oct. 13.

Osborne-Paradis, 36, said that having to spend a season hunkered down in Europe away from his family—during a pandemic, no less—was too much to bear.

“One is that, with COVID, I’m going to have to be away from my family so much for this,” he said. “This has already been quite an uphill battle to get back.”

While rehab was a challenging process that didn’t end up with the planned payoff, Osborne-Paradis said, especially with two young kids at home, he’s been better served for having done it.

“At the end of the day, I put in all the work because I wanted to get back, but it needed to be done. Without the determination to want to get back, I wouldn’t be where I am today,” he said. “My body feels really good … I can go for a run. I can go mountain biking. I’ve been going on some hikes. It’s pretty good.

“Every time I take the next step and I’m worried that it’s going to swell up and be so painful, it’s the complete opposite. I don’t feel it the next day. Everything’s great.

“The rehab was tough, but now I get to live my best life now because of it.”

Osborne-Paradis, who grew up in North Vancouver and now lives in Invermere, was originally set to rejoin the team for the tail end of the 2019-20 campaign, but at an appointment to remove one of the screws, doctors realized that his meniscus wasn’t properly reattached, which set him back.

“I was going to have to take this winter as a progression to snow and to racing and then, hopefully at the end of the season, go in a couple races, which is fine,” he said. “There’s a commitment to go over to Europe for months on end, with a two-week quarantine.”

That led Osborne-Paradis to consider his health during the pandemic, in light of how many different public spaces he’d have to enter.

Osborne-Paradis said the “tipping point” for him was watching the documentary The Weight of Gold, which covers the mental-health challenges faced by Olympic athletes including Michael Phelps, Lolo Jones, Bode Miller and Shaun White.

At his first training session after watching it, Osborne-Paradis was doing one-kilometre sprints and his decision came quickly.

“You get to the point where you keep pushing, where you want more—what I’ve done my whole career—I literally just stopped halfway through and started walking,” he said. “At the end, I just said, ‘I think I’m done’ and that was it.

“I walked back to the car, went home and I told my wife.”

While Osborne-Paradis said that he’d never felt some of the extreme issues the documentary delves into, such as suicide and deep depression, it was another reminder of the battle that awaited him ahead.

The four-time Olympian, who had a best Games finish of 13th in the downhill in Turin in 2006, had many individual accomplishments over the course of his career, winning three World Cup races and podiuming eight other times, as well as claiming his first World Championships medal, a bronze, in super-G in 2017.

“When I look back, the biggest and proudest moment I have—and it’s funny to me because it’s an individual sport—is the Canadian Cowboy team, being part of something so special,” he said.

Osborne Paradis said that between Crazy Canucks and the Cowboys, there were strong racers like Thomas Grandi and Rob Boyd, but the Cowboys were the next successful group of male Canadian skiers.

“With it being a group, it was just so fun to show up to races every weekend and being able to podium,” he said. “Almost every Canadian Cowboy has a World Championship medal, so to be part of that group, the camaraderie that we have and spending decades together, it’s the best memory.

“We had our spats and we had our victories, but we never questioned the process. We never really understood how good we were, but looking back, it was a fantastic time to be part of ski racing.”

Next up for Osborne-Paradis is completing an undergraduate degree in business and entrepreneurial studies at Royal Roads University over the next two years.

Taking a page from his training approach as an athlete for how to properly prepare, Osborne-Paradis concluded that his education was the top priority.

“I’d love to finish my undergrad and then I’d have the right tools for the jobs I want to participate in,” he said. “I’d love to be associated to Alpine Canada or BC Alpine or just the ski world in general in an executive manner.”

When he’s ready to take that plunge, Osborne-Paradis shouldn’t have any trouble lining something up.

“I haven’t told anybody that I’m retiring and I’ve had so many job offers,” he said with a laugh. “It’s crazy. I didn’t think that was going to happen.

“A couple of my mentors said, ‘Take your time. Wade through the offers. Figure out what’s important to you.’”

Ever since coming to the conclusion that his racing days are behind him, Osborne-Paradis has come to be more at peace all the time.

“Every day, I’ve felt better and better about this decision,” he said. “It’s like a weight lifted off my shoulders, and not trying to be the best in the world at something every day is a relief.”