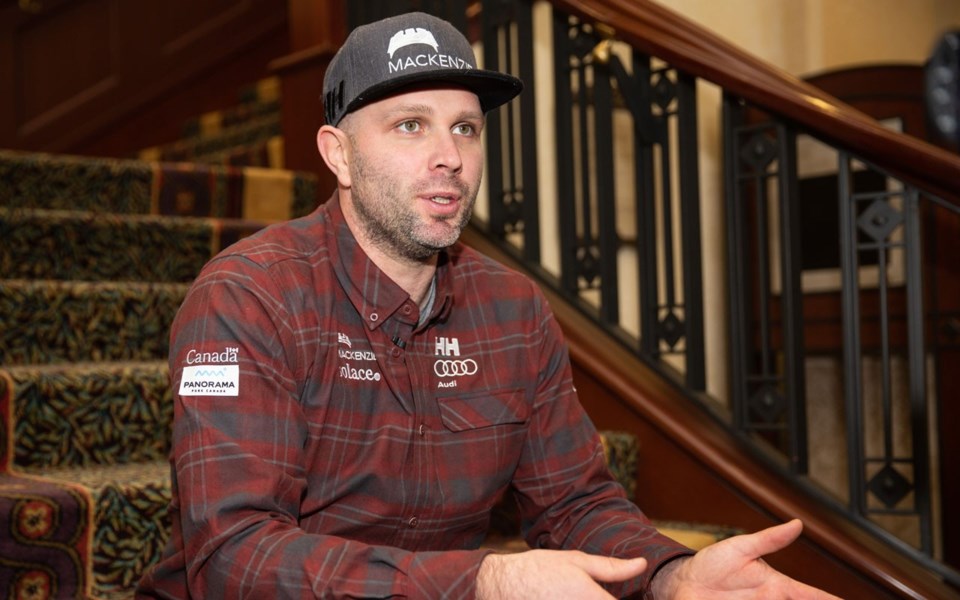 A recent setback in his recovery couldn't keep Manny Osborne-Paradis from giving a boost to the next generation of Whistler Mountain Ski Club speed athletes.

Osborne-Paradis, who turns 36 on Feb. 8, is in the long process of recovering from a harrowing crash in November 2018. While training for the season-opening Lake Louise speed events, Osborne-Paradis went down, suffering a severely broken tibia and fibula. There was initial concern that he might lose the leg, let alone race again.

But Osborne-Paradis, who came up in the club, is working his way back with the hopes of opening the 2020-21 campaign right back at Lake Louise.

Osborne-Paradis had 13 screws keeping everything in his leg together, but when he went to have one taken out, another complication arose, Osborne-Paradis recounted in a visit to

"I went in to get a screw taken out and I was going to return to snow. When I was under, [the doctor] realized that my meniscus wasn't fully attached, so he decided to attach it, which was great," he said. "But I woke up and I was looking at the clock. I went 'Oh, my God, that surgery went longer than we had originally talked about.'

"I've been four weeks non-weight-bearing and I just got back to walking this week. It's just another hiccup in the battle to get back on snow."

While the revelation delays Osborne-Paradis' return to the slopes, his greater timeline—to return next winter—remains the same.

"It's a setback, for sure, but there's still a ton of skiing to be had this year," he said, adding that the procedure was necessary, so sooner was better than later. "People get injured at this part of the season and make it back for next season.

"The timeline is fine. It was just a tough mental battle because I wasn't ready to be back on the couch for three weeks."

Osborne-Paradis was getting set to return to snow on Feb. 3, though his true training won't begin for a few weeks yet.

"I'm cleared to ski with my daughter. We're classifying it as zero-G skiing, so no carving, nothing," he said. "I need one month in the gym and then after a month, they're going to clear me for one-G skiing, which we're emphasizing as carving but not powder skiing in the backcountry."

Osborne-Paradis was ready just in time to make it to Whistler from his residence in Invermere.

With most of the World Cup racing happening in Europe, making it difficult for youngsters to catch it on TV, or not particularly close to Whistler when it's in North America, Osborne-Paradis appreciates any chance he gets to make a connection with them.

"Anytime we can meet face to face, I really try to emphasize that it's important, even if it's just saying hi and signing a poster," he said. "Rob Boyd did it when we were kids and Nancy Greene would stop by and do it as well.

"It tied in what we were all trying to achieve."

While he wasn't able to be on the hill with the kids, he was prepared to pass along a bevy of information in other ways.

"There's so much to talk about that isn't talked about on dry land to emphasize what we need to accomplish on the hill, especially being a speed camp here," he said.

Osborne-Paradis has spent a significant amount of time in wind tunnels the world over and can relay information on proper tucks, ride types and how to be aerodynamic. Having run Mike and Manny's Ski Camp for a decade with teammate Mike Janyk, helping more than 140 young skiers in the process, Osborne-Paradis is an old pro when it comes to helping kids, which he loves.

"They're just so eager to learn. They're sponges. They don't necessarily care about the big picture, which I love," he said. "The big picture is the adult drainage—how am I going to make a living at this? What am I going to become later? What's in it for me?

"They're in it for the enjoyment of the here and now. 'I get to hang out with my friends. I get to expend some energy, I get to be on the mountain and I get to live it up.'"